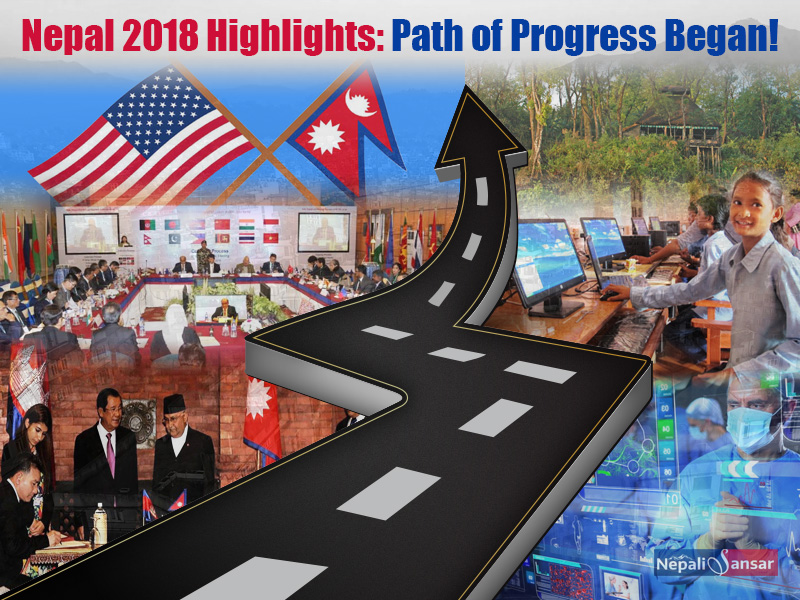 Learning from the past, improving in the present and excelling in the future is the cycle of growth!

This statement perfectly suits Nepal more than any country, considering the transition stages that the country has seen over the decades.

Although a landlocked nation sharing borders with two Asian giants, a land with rich history and heritage, a country with very-rich biodiversity profile and abundant natural resources, the Himalayan nation has seen all forms of sufferings: intense political struggle, lack of proper governance, sudden shifts in ruling, lack of support & infrastructure, among others.

Fighting out the odds, the country has started making some positive strides in recent years. 2017 was one in the process that was a game-changer for the country!
Learning from the gaps in 2017, Nepal rose to more heights in 2018, locally and globally.

Look at how Nepal performed in 2018 across various fields:

While 2017 ended with the start of long-awaited Nepal’s legislature and parliamentary elections, 2018 marked the beginning of the new era in the country’s political history, welcoming KP Sharma Oli back to power.

Oli Government, by forming the new government, gave a new ray of hope for Nepalis. Balancing the act between the new Asian giants, Oli Government managed to show a new direction to Nepal beyond borders. Resultant is the new bilateral ties that the Oli Government has signed with new nations.

Here are some interesting major initiatives pertaining to the Nepal Government at a glance:

2018 was a year for some good Entertainment News from Nepal. Movies like Prasad, Chakka Panja, Loot and Maleeka ruled the Nepali Box Office 2018.

Let’s take a look at some of the updates that kept Nepali audience glued to YouTube and other social media on account of their popularity:

Nepal did some extensive tourism promotion activities in 2018 and made remarkable achievements at the tourism front.

Here are a few of them:

Sports can be termed as one of the favorite aspects of Nepal, considering the country’s growing status in the relevant category, locally and globally in various tournaments of different sports. Cricket, Volleyball, Football, Badminton, Golf, among others are some to name a few, where Nepal has been excelling over the years. 2018 has been a special year for Nepal in taking ahead its sports to the global level and draw additional traction of global audience.

Let’s have a glance at Nepal’s key sports highlights in 2018:

Nepal has seen major developments in its health sector in 2018. The country took many initiatives towards assuring a better healthcare system to its citizens.

Let’s take a look at some of such health-related updates pertaining to Nepal in 2018:

Nepal has always been active in adopting new methods in its process of development. One such trend today most prevalent in Nepal is the Technology trend. The country’s majority youth population is the major driving factor for this trend.

Let’s see how the country performed in this particular area in 2018:

Immigration is one area that matters the most to Nepal because of the country’s high migrant population. Lack of opportunities or any other challenge, be it for any reason, Nepalis have been giving their best at every nation they work in as migrants.

Nepal is known for its diverse communities speaking many languages and following multiple traditions. And, women have a special role and respect in the Nepali society.

Nepali Women, locally called Nepali Mahila, have their significant role in every part of the country’s development, be it politics, industry, entrepreneurship, among others. While they are many remarkable success stories around Nepali Mahila over the years.

Let’s take a glance at some of the significant ones in 2018:

Let’s take a look at some of them:

Nepal has always been active in hosting events of any type, be it politics, technology, sports, entertainment, etc. Continuing with its encouraging spirit of hosting events, Nepal organized many important events in 2018, some of them including:

Nepal made headlines for some of the craziest and unbelievable world records it smashed. While some of them were loved, some received mixed reactions.

‘Love for Nepal’ is the unique aspect of Nepali Sansar. This love moved NS Bureau bring out the best-of-the-best stories pertaining to Nepal and Nepalese over the years, irrespective of fields. Resultant, we feel glad to have created an extensive library of special stories around sports, entertainment, tourism, among other key areas of Nepal. We did not miss to pick up the stories of influencing Nepalis and their inspiring stories that stand out as real motivation for all.

Nepali Sansar has been active all through the year covering every important aspect of Nepal in 2018. As part of the 2018 journey, Nepali Sansar Bureau took one extra step to meet some eminent personalities of Nepal in the form of interviews. The list includes general CEOs, social workers, student leaders, motivational speakers and many others from different walks of life.