Explained: How Agriculture and Animal Husbandry are Reshaping Nepali Economy 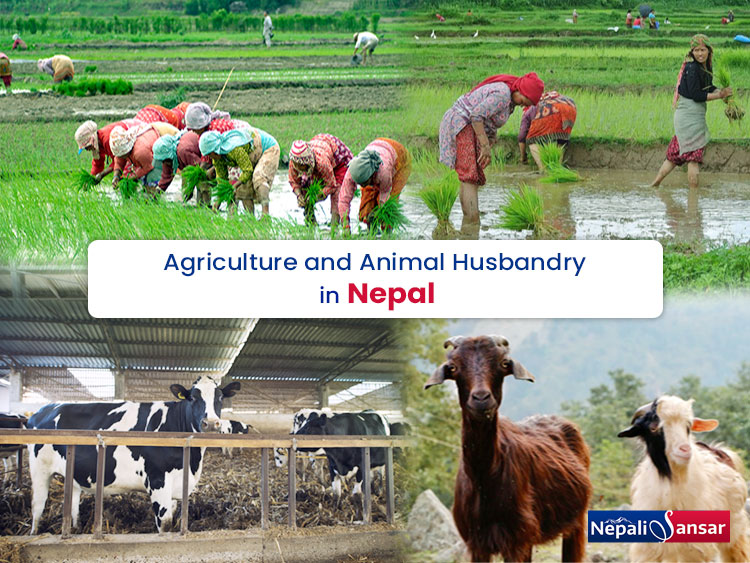 Nepal is one of the countries which continues to enjoy a bond with mother nature. Although tourism is one of its significant revenue streams, the Himalayan nation relies on agriculture to uplift its economy. The agricultural and animal husbandry activities contribute 27.1 percent to Nepal’s GDP as food exports and national consumption continues to boom.

Realizing the importance of these activities, the Nepal government identified 15 products that are significant for the country. Ranging from paddy to honey, various consumable products have been figured onto Prime Minister’s Agriculture Modernization Project (PMAMP).

In this feature piece, we bring forth the details about the shortlisted food products. From arable land to tonnage of products, this literary feature sheds light on Nepal’s important agricultural and animal husbandry products, which propped the country in the fiscal year 2019/20. 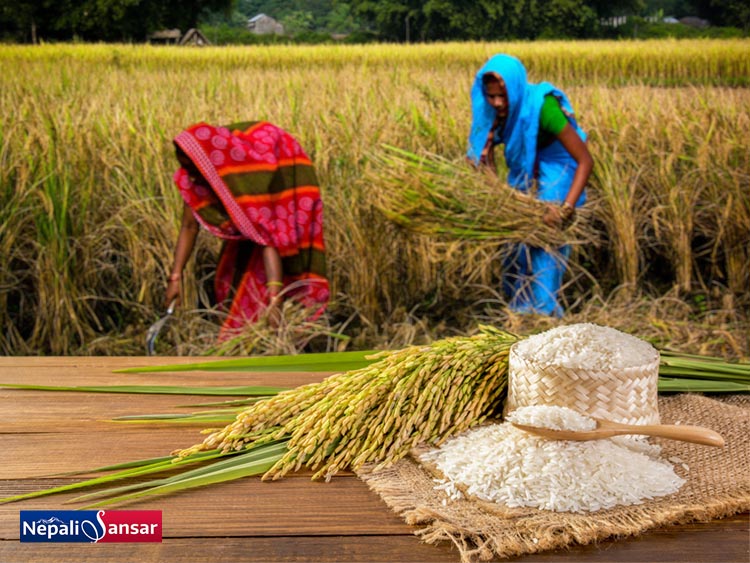 Rice is one of the most important food items among Asians. It is a daily consumable in Nepal and across various parts of Asia. Cultivating rice crops has become the livelihood for two-thirds of Nepali farmers. It goes without saying that rice is one of the critical agricultural crops in Nepal.

Nepal farmers utilized 1,491,744 hectares of arable land and produced 561,011 metric tonnes of rice in the FY 2019/20. Kanchanpur district has cultivated the highest amount of rice which is 40,323 metric tonnes. Trailing behind Kanchanpur is Chitwan, with 34,809 metric tonnes.

The paddy crops constitute 20 percent of the Agri GDP or A-GDP of Nepal. On a larger scale, rice contributes more than 7 percent of the national GDP. 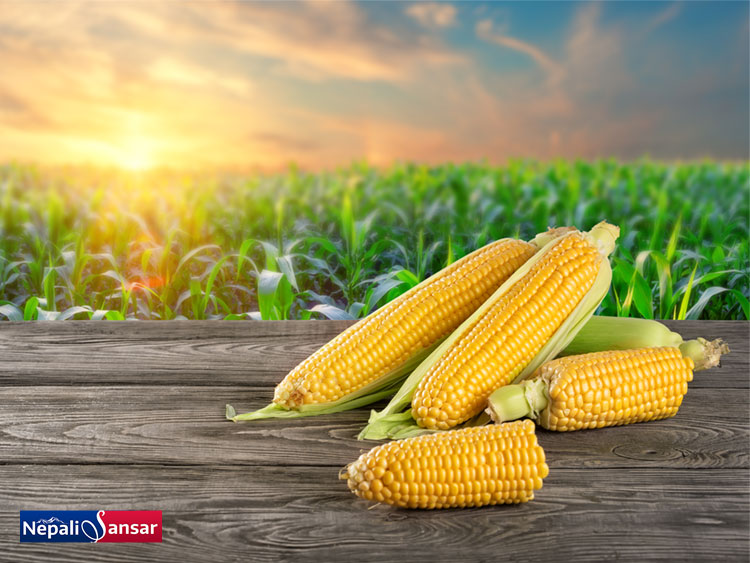 Corn is consumed majorly not only in Nepal but across the world. It is a significant ingredient in the diet of mankind and animals. Be it food or fodder, corn is used on a daily basis. The food is favored by the animal husbandry farmers as cattle derive their energy from corn-enriched fodder. Thanks to its high demand, corn cultivation has increased by 5 percent annually over the last decade. After rice, it is the most critical crop in Nepal. 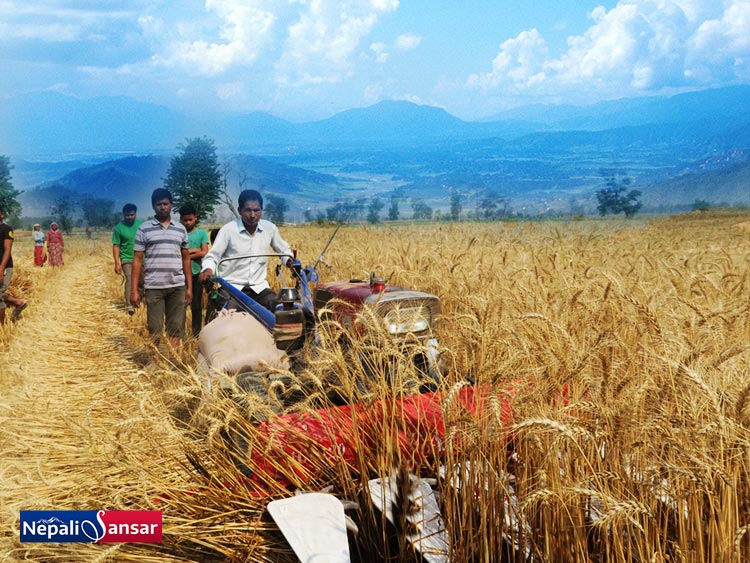 Wheat is one of the oldest crops in Nepal. The crop has gone on to become one of the most important crops in the country as it is used as various consumables from bread to cereals. 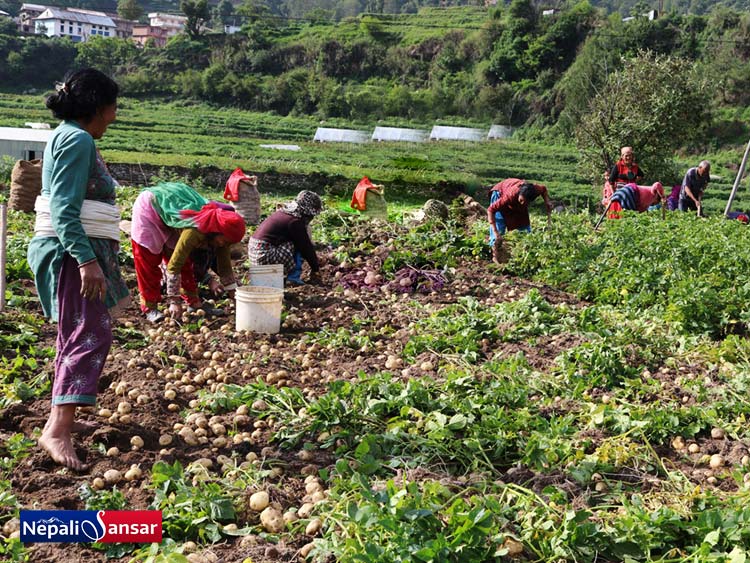 Potatoes are favored by people living in the hills and mountains of Nepal. This is primarily because potatoes grow even in the harsh arid regions of the Himalayas. The high demand for potatoes props the cultivation of potatoes. Due to high abundance, this is one of the most affordable foods in the country.

Understandably, due to the high demand and favorable conditions, potato cultivation is one of the fastest-growing crops in Nepal. This food production alone makes up 6.57 percent of the agricultural GDP. Even on the national GDP scale, potatoes constitute 2.17 percent of the GDP. 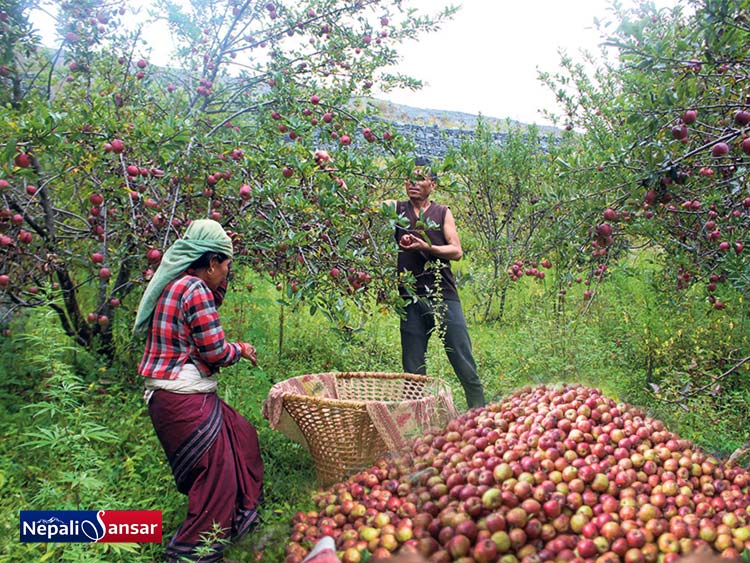 Apple is a fruit that needs no introduction. Consumed by many households for its taste and nutrition, Apple is one of the biggest cultivations in Nepal. Its high demand and resale value have endowed it the ‘cash crop’ status. It contributes 14 percent of revenue to Nepal’s GDP.

The total arable land used for apple farming is 11,186 hectares, and the farmers produced 31,386 metric tonnes of fruit in FY 2019/20. Jumla was confirmed to be the most significant apple contributor with 6,799 metric tonnes. The district of Mustang chugged up to the second spot with 5,727 metric tonnes. 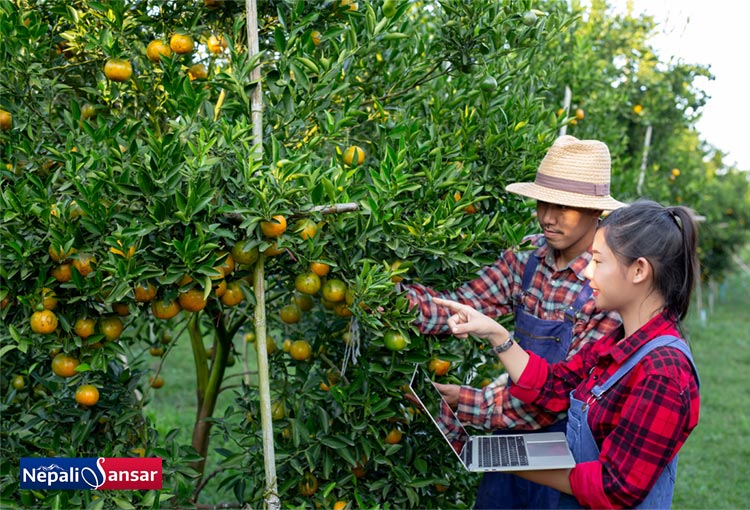 Citrus fruits are consumed widely on a global scale. Be it lemons or oranges; people love to down these fruits on a daily basis. On an arable land of 46,412 hectares, 271,908 metric tonnes of citrus were produced.

Solukhumbu is the district that produced the highest output of citrus with 1,449 metric tonnes in FY 2019/20. Gulmi is the second biggest contributor with 408 metric tonnes. Syangja produced NPR 356.6 million worth of oranges grown over an area of 1,270 hectares. The grapefruit is grown highest in Sindhuli with 4,900 metric tonnes, which were produced over 400 hectares of land. 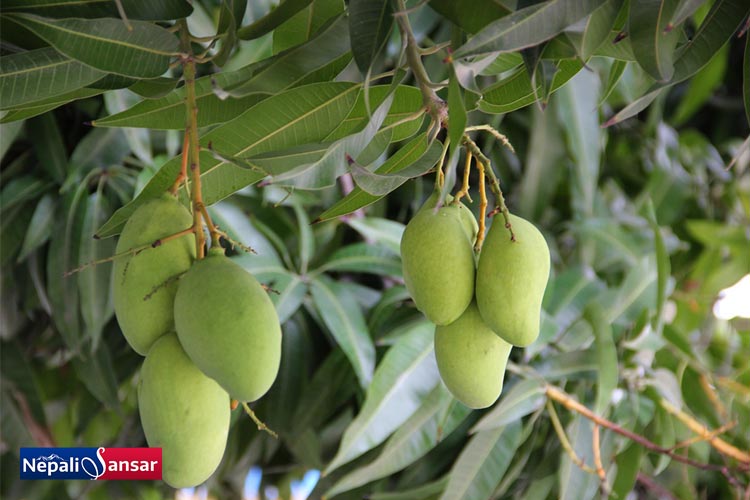 The king of fruits reigns over Nepal as well. Mangoes are savored by many as it is one of the tastiest and pulpiest fruits there is. It is high in vitamins while being low on calories. As it is a seasonal fruit, the demand is considerably higher than for other fruits. Understanding this, farmers doled out 366,144 metric tonnes of mangoes which was grown over 49,588 hectares of land. Surkhet district yielded the highest output of mangoes with 400 metric tonnes.

Also Read: Baji, the beaten rice that is ingrained in Nepali Newa Culture 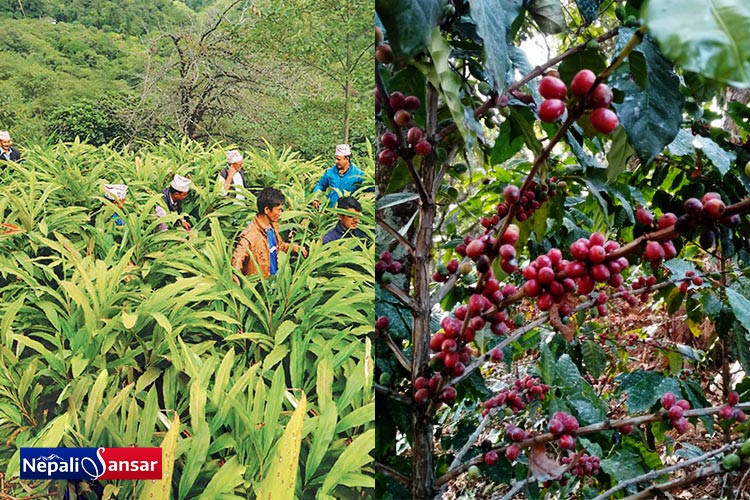 Nepal capitalizes on the global demand for its products. Farmers have begun cultivating crops with the intention to export them all together. Nepal exports coffee and cardamom.

Nepal’s coffee production has been spiking in recent times. Kavre has stepped up as the highest coffee producing district with 221 metric tonnes grown over 973 hectares. Another 1 million hectares of land is projected to be used for coffee cultivation. 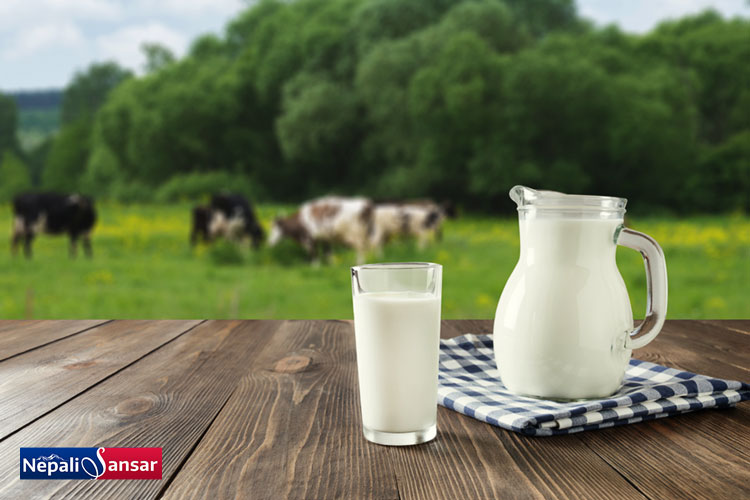 Although it is the 21st century, Nepal continues to rely on cattle for its agricultural activities. As most of the agricultural farmers have cows with them, the Himalayan nation produces dairy products on a large scale. The fact that almost 80 percent of the milk is provided by small farmers displays how vital and intricate cattle are with the agrarian culture.

The Ministry of Agriculture and Livestock Development realized the significance of cattle farming and educated Nepalis about crossbreeding, which would improve the genes of the cattle. The ministry has also made efforts to make animal husbandry much more efficient.

Fish is one of the most nutritious foods that the world has. High on protein but low on calories and cholesterol, fish is consumed and favored by health and meat lovers alike. In Nepal, fish is an important aspect in economic terms as they provide a livelihood for many people of different ethnicities. Propelled by the massive demand, different people of Nepal are showing interest in adopting pisciculture. 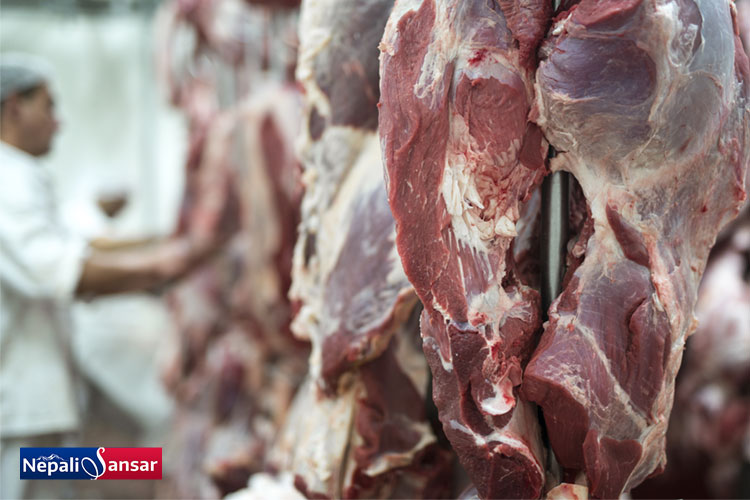 Cattle rearing for meat generation has occupied 13,082,641 hectares in Nepal. The rearing has generated 357,082 metric tonnes of meat production. In economic terms, animal husbandry has contributed 11.5 percent to Nepal’s GDP. On smaller terms, it created 25.7 percent of agricultural GDP.

Goat meat is also one of the most consumed meats in Nepal. Goat herding is a lucrative profession for the most landlocked country. A whopping 65,583 metric tonnes of meat is generated every year. Surkhet and Dailekh are the regions that contribute the maximum amount of goat meat.

Apart from goat meat, pork is one of the consumed meat in Nepal, and it has been observed that the demand has been increasing in the Himalayan nation. 18,709 metric tonnes of pork meat have been generated in Nepal. Morang and Jhapa are the regions that contribute the most when it comes to pork meat. 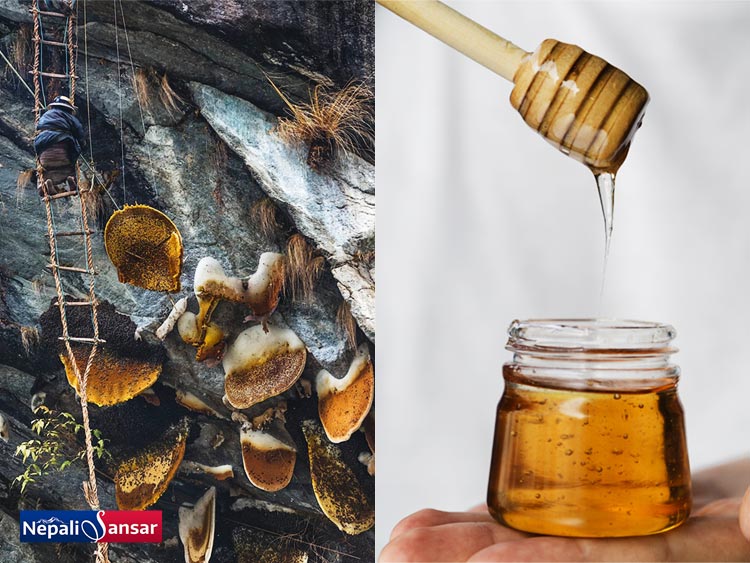 Honey is one of the foods which is loved by a lot of people. Be it green tea or weight loss; honey is slurped in high demand. With bees pollinating and giving honey to farmers, apiculture is one of the sought-after professions in Nepal.

As the demand for Himalayan honey is high, Nepal could generate 3,990 metric tonnes by using 242,500 hectares. Morang outclassed every other district by generating honey with 15,000 hives, while Lamjung generated 35,000 hives.

Also Read: 12 Best Movie Theatres in Nepal You Must Try!

As one can observe, the pristine mountains of Nepal house not only trekking opportunities but also great flora and fauna. Be it healthy veggies or animal meat, Nepal has a lot to offer to all. It is excellent to gorge on foods grown in such a pristine environment.

So, pack your bags and head to Nepal. Your gastronomic journey will be unique without much effort.