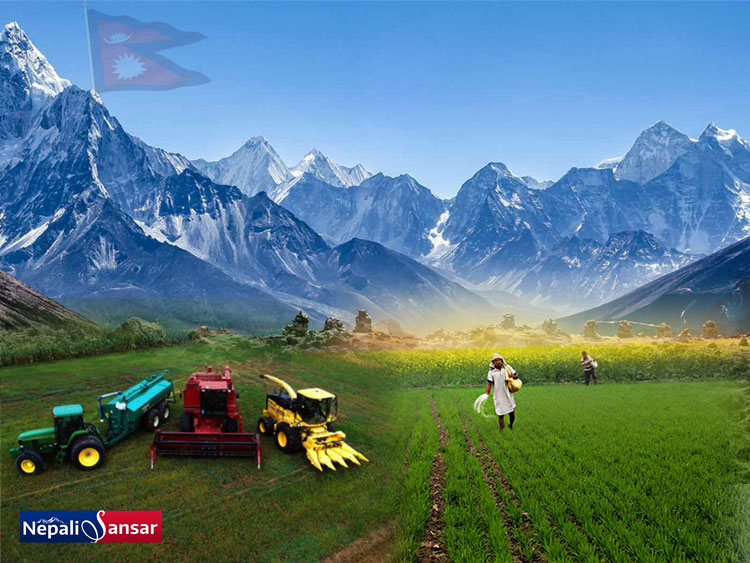 On Dhan Diwas, Nepal’s most significant agricultural festival, farmers across the Himalayan nation were seen celebrating the significance of farming by singing, playing in the field, and planting saplings for a new crop.

However, few farmers in the Terai diverged from the tradition and instead opted for modern plantation techniques to place the saplings.

However, this is not the first time that Nepali farmers have ditched traditional practices for mechanical farming methodologies.

“When I was in Jhapa, one Hari Silwal had returned to Nepal after studying in Europe. He might have observed and learned the European style and agricultural technologies there; hence he brought with him a four-wheel-drive riding-type rice planter, a combined harvester, and 5,000+ plastic trays. In 2014, he introduced them in the Kankai Municipality of Jhapa,” he said.

Megh Nath is currently posted in Chitwan, and there, farmers have already shifted to modern farming. However, Nepal’s efforts to modernize the farming methods are stunted by the high costs of the machinery. Although the mechanization drive is being implemented across all the districts, stakeholders are shirking away from the drive due to the high investment values.

Understanding these concerns, the government kicked off the drive with the PM Agriculture Modernization Project (PMAMP) a decade ago. Despite being armed with a budget of NPR 130 billion, the project has failed to realize its full potential due to political instability and headwinds.

Change is never fully embraced by all, especially in the Himalayan nation, where Nepalis have farmed with their bare hands and toiled under the sun to reap their harvest. However, with the introduction of modern farming methods, some people became the early adopters of the technology.

“Traditional methods are precious, and we should definitely respect them, but modernization in agriculture is important to adopt new ways and result in efficient harvest,” said Megh Nath.

But, does the Himalayan nation need farming mechanization, which would render the traditional methods obsolete? PMAMP Director Baikuntha Adhikari answered it with a resounding yes. “The whole agricultural scenario has seen a decline in Nepal. There are physical risks involved, which drives people away naturally. Agriculture also requires more labor, so people today refrain from that. And on top of all, people now have new, better, easier sources of income, driving them further away,” he opined.

Agricultural engineer Sandesh Poudel, who works with PMAMP, concurred with the Director’s observation.“The machines can decrease the labor input, making farmers more efficient and resulting in more harvest. This in return makes them independent.” As Poudel explained, in an instance, the plantation machine plants six saplings instead of one sapling at the moment.

Also, another helpful machine which is gained admiration from Nepali is the bailer machine which collects hay and bundles them into bales. These bales are retailed as cattle fodder and utilized for mushroom farming. All this collection and packaging is done by one machine alone, which would require a lot of manpower. The reduction of the workforce is saving a lot of time and money. With an increment in savings, modern farming has become a lucrative deal for most.

As per the PMAMP data, corn farmers of Chitwan saw a reduction in seed sowing expenses. The data reflected that the costs were trimmed by 14 to 25 percent, and labor expenses were halved. The data is buttressed by another finding in Bardiya, where farmers witnessed 70 percent labor expenses wiped away by the usage of machinery.

In Manang, Mustang, and Jumla, farmers saw a 1,000 percent jump in apple production, and farmers of Bardiya, Nuwakot, Sindhupalchok, and Dadeldhura experienced better productivity of potatoes.

Although Nepal introduced modern farming techniques six years ago, no comprehensive study was conducted on how modernization impacted the farmers. “Nevertheless, in the recent chaite dhan (winter paddy) harvest, we saw a 5 to 10 percent increase in production. But, because the crops were earlier treated with saltwater, that might have increased the production too,” said Poudel.

Compounding the adopting hindrances is the hesitation of the laggards. Although farmers are aware of the benefits, the hesitation and lack of inertia are slowing the adoption drive.“We are still in the adaptation phase. Many are reluctant to change. Those who have changed their ways are benefitting, but full adaptation will still take time and strong advocacy to accelerate the transitions,” said Poudel. 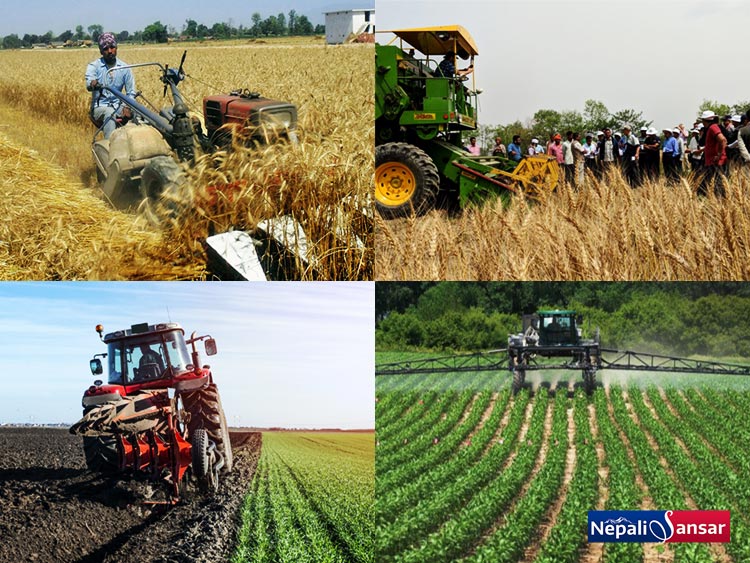 The PMAMP stated that Nepal was using different types of machinery as per the requirements. The machines were used in different stages. From farming to marketing, farmers have integrated modern machinery with their farming methods.

As the project data reflects, up to the financial year of 2019/20, 2,368 machines were in use. The harvester, thresher, reaper, and transporter machinery themselves account for 120 units.

As per the early adopters, the machinery which Nepalis prefer to use comes from Japan and Korea. To be specific, the Japanese technology machines are manufactured in Korea and used by Nepalis. As Megh Nath put it, this is Japan-Korea machinery is prevalent in most of South Asia. 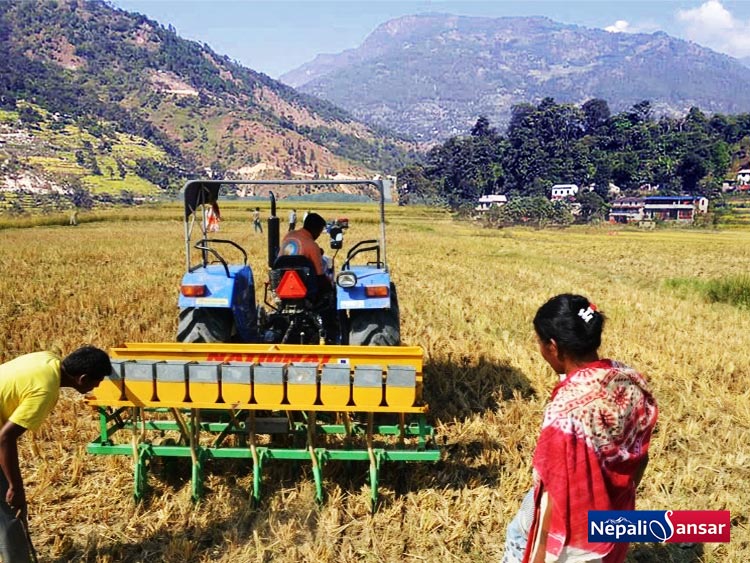 “They need government sponsorship or heavy subsidiaries to be able to use it. In Jhapa, the authorities gave machines with 85 percent aid,” an official says.

“Farmers cannot afford it. A single heavy machine is heavy and costs an investment of two million rupees. Also, because the machines are used only for around a month and shelved for the next 11 months, it gives a low return in investment (or ROI) and more burden to the farmers to buy on their own,” the official adds.

Also, the farmers are frugal and smart with the machinery usage. For instance, Surya Bogati procured a harvester by roping in other farmers of the area. “It has been five to seven years that we have been using it. It takes four hours to cover two bighas of land.”

Underscoring the lack of monetary resources, Megh Nath said, “The government only distributes seeds and organizes occasional training, which is not enough. If we are to accelerate the modernization, we need the proper equipment.”

PMAMP Director was non-committal, however. He said, “There are many factors starting from the budget itself. In five years, the project has spent some 61 percent of the budget, but the mobilization of the resources is not satisfactory.” 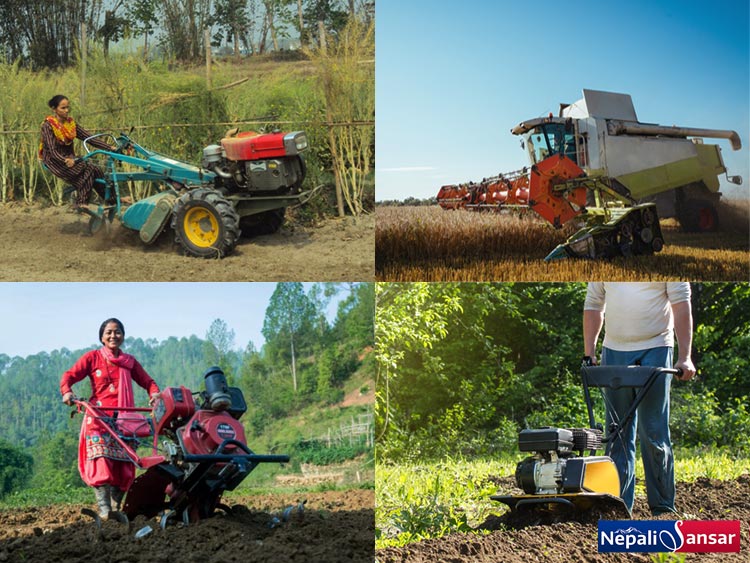 The Director did admit that the project failed to meet the expectations of the agricultural stakeholders. “It came into existence to introduce modern approaches in the Nepali agriculture space. The project aimed to better the production, make Nepal self-sufficient, and promote the agro-economy of the country. For this mechanization, modernization and alternative agricultural approaches have been pushed forward simultaneously,” he stated.

“But, not just the people outside but those within the organization are not fully in sync with the organization view. On top of that, the ecosystem among the departments of the Agriculture Ministry and other ministries [roads, infrastructure development] also has been poor, and it has resulted in us lagging behind our work. Everyone thinks it is our responsibility alone; there is no coordination that we need.”

He elaborated by saying that the stormy political winds of Nepal have compounded the execution of the project. To make matters much more complicated were the frequent changes of the project team. With so many changes, the PMAMP is mired in various implementation problems despite its noble goal.

Buttressing the execution issues perspective was the Director’s statement where he stated the department cannot fulfill the objectives of the project. “With today’s graph, we can sadly only achieve 70 percent of the objective.”

“But, we still have five years. If we can change our ways, mobilize the resources, get all the stakeholders from ministries to the local level to coordinate, and even get the additional budget, the original objective of the project can be achieved. We can only hope.”