Navigation
Navigation
Home > Entertainment > Another Nepal World Record — Only Person Who Can Touch Forehead with Tongue!

Another Nepal World Record — Only Person Who Can Touch Forehead with Tongue! 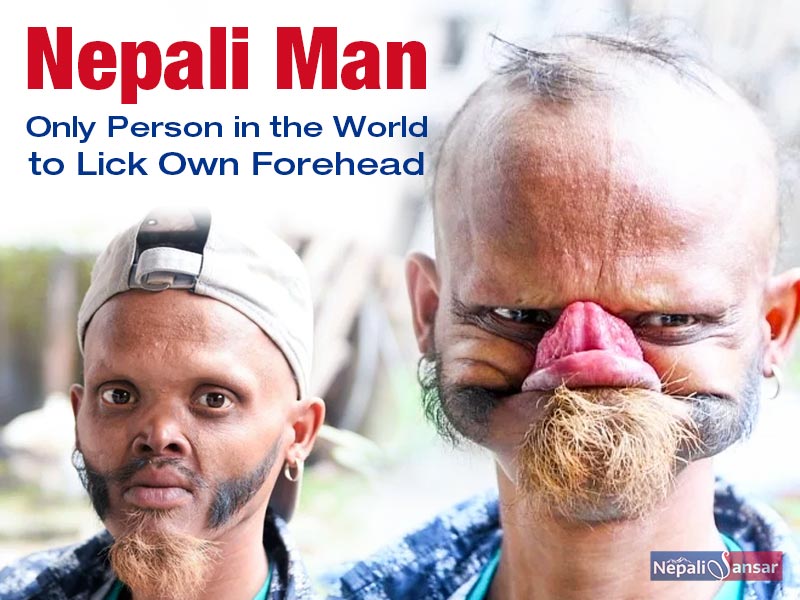 We’ve all tried to touch our nose with our tongues right? Result? We could barely touch even close. But what if someone touched their forehead with their tongue?

While most people are still trying to see if it’s possible, 35-year-old Yagya Bahadur has already registered success with this mind-boggling trick!

Nepal says that Bahadur is physically & mentally fit and that he discovered this rare feat at an early age.

The secret behind Bahadur’s surprising skill is the fact that he has just ‘one tooth’!

The Nepali bus driver claims that he is the only person in the world that can lick his own forehead.

With the impressive skill, Bahadur says, “I think I look great like this. I can cover my nose with my lips, lick my forehead and make the sound of bullet bike.”

‘If I got to act in a horror movie, I wouldn’t need makeup like other actors to scare people,” Bahadur said while expressing his desire to work for the ‘big screen’. He also has plans to do his nation proud by creating a Guinness World Record with his skill.

“I want to set a Guinness World Record for being able to cover my nose with my lip while licking my forehead,” he adds.

We wish Bahadur luck for his future aspirations and hope this star receives world recognition for his rare skill.