Nepal is always proactive in welcoming any new trend.

It’s evident in every event the country hosts and across international sports events that the country’s sports persons take part in.

Here is one update on Nepal welcoming the ‘Rugby’ sport.

For the first time in Nepal history, around 2500 Nepalis took part in a ‘huge rugby festival’ organized in Kathmandu’s Tundikhel Park, taking into hands the rugby sport with intense joy.

The rugby festival titled ‘Get into Rugby’ was organized on the occasion of the Rugby World Cup 2019 Trophy Tour to Nepal, the Trophy’s final destination in its 20-nation tour in 2018. This tour marks the Webb Ellis Cup’s first-ever visit to Nepal!

This event is part of the ‘World Rugby’s ‘Asia 1 Million’ Impact Beyond’ legacy program, which intends to promote the rugby sport across the world. The Trophy Cup supports the program through World Rugby Tournaments across the globe. 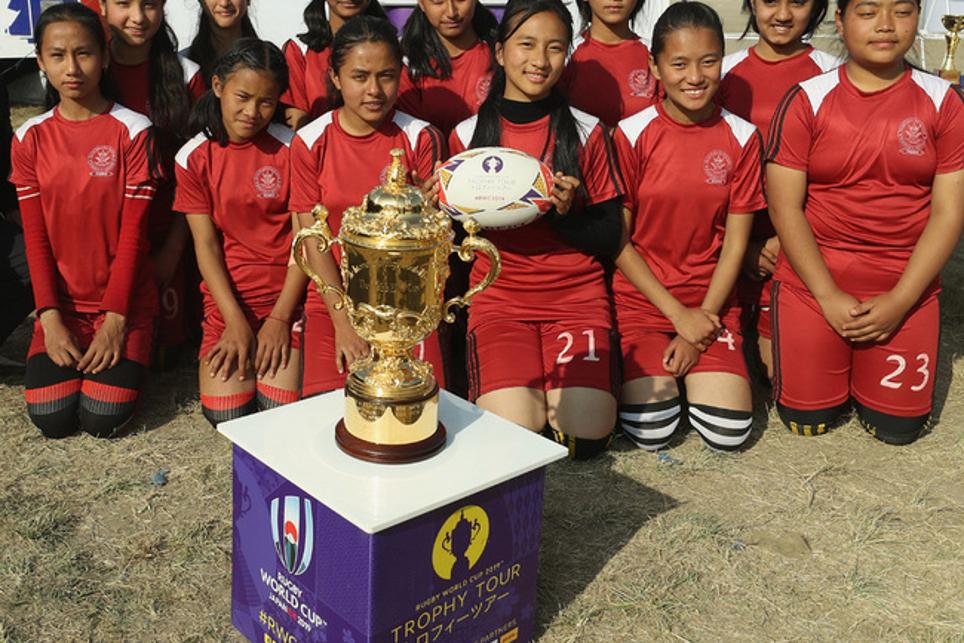 The program aims to attract one million new rugby participants by 2020 and has successfully engaged over 900,000 people across Asia so far.

Now, its Nepal’s turn!
Vice-President of Nepal Nanda Kishor Pun opened the program in Nepal, which saw thousands of adults and children from different parts of Kathmandu actively participating in a day of events.

Many were excited to play rugby for the first time, adding to the energy of Nepal Rugby that has been effortless in promoting the game, locally.

The event also excited the participants with music alongside giving them the chance to see the Webb Ellis Cup as part of the Rugby World Cup 2019 Trophy Tour.

“It is fantastic to see the impact the famous Webb Ellis Cup is having in inspiring new players to participate in rugby around the world as part of the Rugby World Cup Trophy Tour. It is an exciting time for rugby in Asia as participation and fan growth accelerates rapidly throughout this youthful continent with the first Rugby World Cup to be hosted in Asia now just around the corner. Japan 2019 is set to be a game-changing moment for rugby globally,” says World Rugby Chairman Bill Beaumont.

As part of Kathmandu visit, the Trophy also visited some of Nepal’s iconic centers such as temples in Kathmandu, Swayambhunath (Monkey Temple), Patan Durbar Square, Boudhanath Stupa and Pashupatinath Temple.

Nepal’s Visit- Highest-Point Visit for Rugby Cup
Nepal tour marks the highest-point visit for the Webb Ellis Cup till date, where it was taken to the 5,500-mt height in the Himalayas at Kala Patthar (meaning ‘Black Rock’ in Nepali).