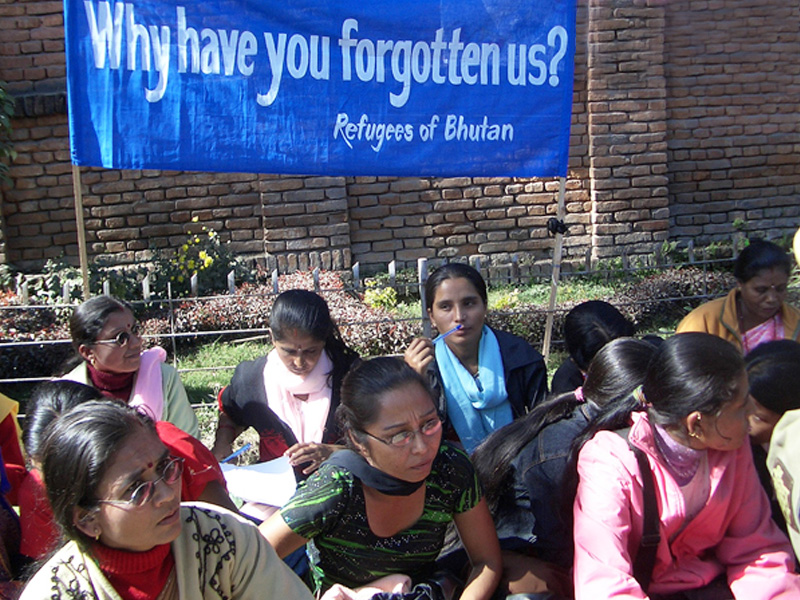 For more than two decades now, Bhutanese refugees living in Nepal’s Jhapa have been waiting to return home. Even after 26 years of exile their fight is still on!

December 10, 2018 marked the International Human Rights Day 2018 and these refugees took the opportunity to urge human rights bodies to take up repatriation initiatives.

Close to 200 refugees conducted a rally in Beldangi camp appealing to national and international human rights representatives to help them return home.

Background
Nepal is hosting Bhutanese refugees since early 1990s. However, since 2007, 110,000 refugees have relocated to various countries according to the United Nations High Commissioner for Refugees’ (UNHCR) Third Country Resettlement Program.

Refugees commented that the Nepal Government, UN agencies and human rights groups were not doing enough to bring them relief.

They further stated that UNHRC had prioritized the Third Country Resettlement Program when it was not the solution to their problem.

Bhutan Swatantra Janamacha General Secretary DB Subba said that they were determined for repatriation and urged the authorities in charge to create a suitable environment for their return.

Another challenge awaits the Nepal Government, which has to choose between hosting the Bhutanese refugees and finding an alternate to the World Food Program’s food support to Nepal. The world body decided to end its support effective December-end, 2018.

The Bhutanese refugee crisis is another important issue for Nepal after the Rohingya crisis, especially because it is a United Nations Human Rights Council member and is responsible for addressing related issues.

The protest was staged to show the growing human rights violations incidents including rape and murder of minor girls.

It is shameful for the government to be unable to arrest those involved in the 13-year old girl’s rape and murder even four months after the incident, the activists said.

Besides this, they also demanded end to impunity and violence against women, protection of human rights and press freedom, punishment to the guilty and compensation to the victims of rights violation.