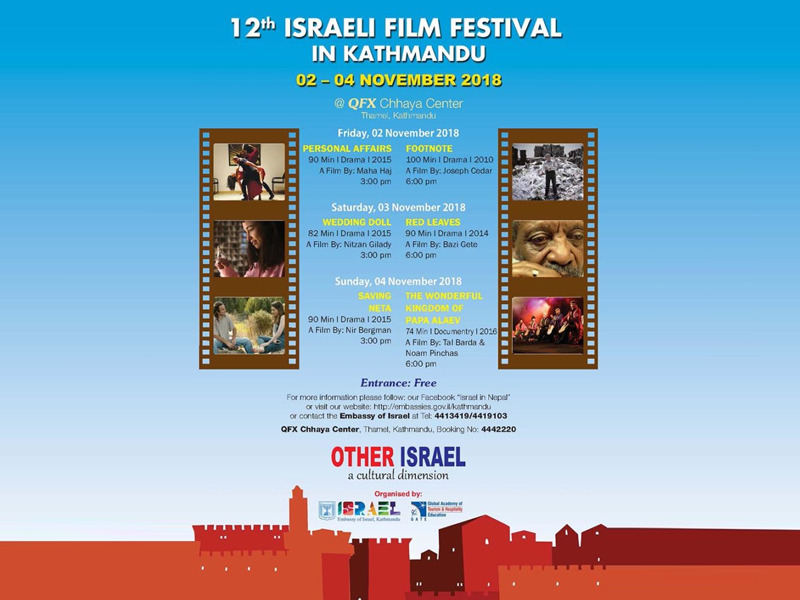 Strengthening Nepal-Israel art and cultural ties, the 12th edition of the three-day Israeli Film Festival kicked off at the QFX Chhaya Center in Thamel, Kathmandu on November 01, 2018.

The Israeli Embassy in Kathmandu is organizing this film festival marking the six decades of establishment of Nepal-Israel diplomatic relations and take it to further level through cultural ties.

Inaugurating the festival, Nepal Culture & Tourism Minister Rabindra Adhikari lauded Israel for its financial and technical support to Nepal in its developmental activities.

He said this film festival will promote and contribute to the success of the Himalayan nation’s ambitious Visit Nepal 2020 tourism campaign.

On the occasion, Minister urged Israeli producers to invest and tap the actual potential of the scenic landscapes of Nepal and shoot their films in the nation.

On the occasion, Israeli Ambassador to Nepal Benny Omer was quoted in Rastriya Samachar Samiti as saying that various cultural programmes were hosted in Nepal since Nepal and Israel established diplomatic relation in 1960 and this Film Festival, as he put it, was a part of cultural diplomacy.

Meanwhile, the CEO of Global Academy of Tourism & Hospitality Khem Raj Lakai lauded the Israeli Embassy in Nepal for choosing his college as a venue to screen their films.

The Government of Israel has declared 2017 and 2018 as the jubilee years in the history of modern Israel.

The 12th edition of the festival is aimed at showing the cultural side of Israel, alongside Israeli families, Jewish traditions, struggles and success stories.

The festival has given a free entry for the enthusiasts willing to watch Israeli films. Two films are screened a day between 3:00-6:00 pm.