Gauchan, who already announced retirement to the international cricket in July 2018, took the #EPL2018 stage to say goodbye to his domestic cricket career as well
Cricket
News
Special Stories
Sports 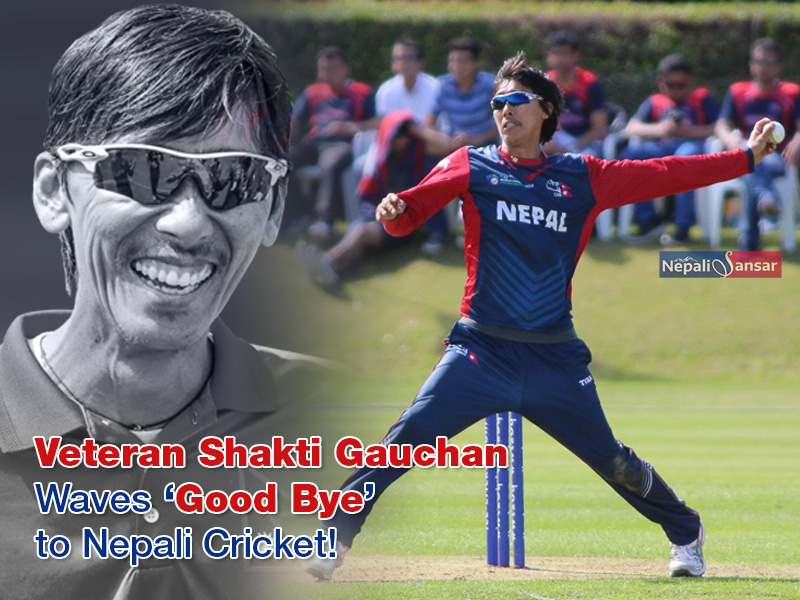 This was because the Nepali veteran cricketer and the longest-serving member of the Nepal cricket team Shakti Gauchan said goodbye to his cricket career!

Gauchan, who already announced retirement to the international cricket in July 2018, took the #EPL2018 stage to say goodbye to his domestic cricket career as well.

So, Gauchan’s EPL teammates Pokhara Rhinos decided to give him a rare honor and took the veteran leg-spinner on to their shoulders, amid more than 10,000 cricket fans watching the scene with happiness.

The situation moved Gauchan a lot, who literally cried out of emotion with intense joy waving to his fans with happy tears and for the love his teammates had for him.

“I think this guard of honor and love from the spectators is the result of my honest contribution to the country and loyalty to the game. The emotions in the ground (while receiving the guard of honor and cheers from the crowd) was something which I cannot express in words. This moment is unforgettable for any player and it will etch in my memories for a lifetime,” Gauchan told the media.

Gauchan, who says his life is ‘destined for Nepali cricket’, made his debut in the senior national Nepal cricket team in the 2002 ACC Trophy against Oman.

From then, the veteran continued to grow with the sport and has successfully completed his
18-year-long active journey with the national cricket team.

When the national anthem was played while I was playing for Nepal for the first time during the 2001 ACC U-17 Youth Asia Cup in Bangladesh, my inner soul had said you are born for Nepal and have to do something for your country. Cricket is the only thing that will direct you. 18 years down the line, the love that I have earned from cricket is something that I am very proud of,” Gauchan added.

Hailing from India, Gauchan began his career as the opener batsmen and set a 1000-run mark, becoming the first Nepali cricketer to do so for the senior team.

Gauchan was equally successful as a bowler too! He is the third Nepali cricketer to have taken 100 wickets after his co-team members Mehboob Alam and Basanta Regmi. 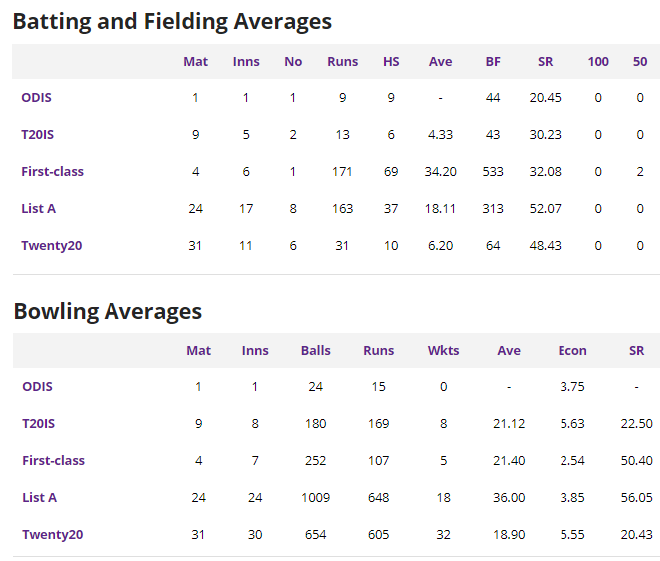 Besides in regular national team, Gauchan also led the Nepal U-17 team in the U-17 Asia Cup and then the Nepali U-19 team, gifting centuries for both the youth and senior teams.

Gauchan also played for Nepal in many international cricket tournaments.

Gauchan is also the first Nepali cricketer to score 100 runs in the World Cricket League, which he made in Italy during the 2005 Division 2 Qualifier match.

In total, Gauchan played 9 Twenty20 international tournaments for Nepal. He was known for taking 18 wickets in List A and 32 wickets in Twenty20s, and a total of five wickets in the First-Class matches. 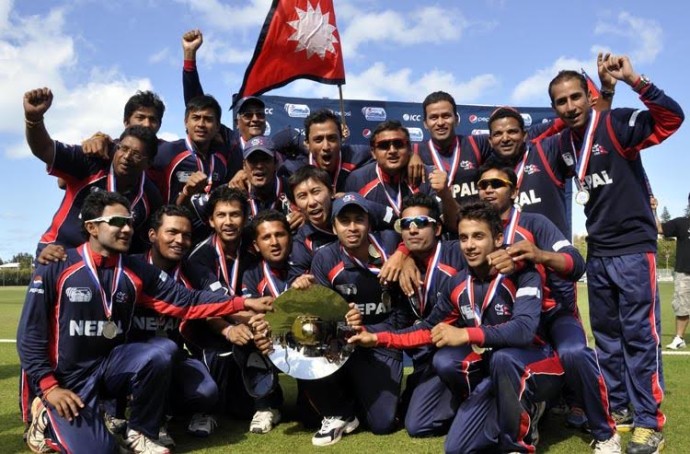 Gauchan moved on to leave his mark in every match he played for Nepal in the world cricket!

ICC World Twenty20 Qualifiers at UAE was one termed as ‘Gauchan’s come-back’ after a short gap, where he claimed hat-trick wickets against Denmark becoming the only male cricketer to have made such rare feat in Nepali cricket history.

Following this, he also received a call for brief training camp at the Indian Premier League for Rajasthan Royals.

Gauchan’s reputation as a spinning sensation touched new heights when he bowled the world cricket legend Rahul Dravid! Gauchan also have a special role in Nepal’s maiden entry to the ICC World Twenty20 in 2014 in Bangladesh.

Gauchan’s performance in the World Twenty20 tournament also earned him special recognition from the former Pakistani cricketer-turned commentator Ramiz Raja. Raja called Gauchan “Shakti, The Power” in the Nepal-Hong Kong match, where veteran spinner took 3-9 wickets in four overs and also stood as the ‘Man of the Match’.

“Singing the national anthem during the World Twenty20 and playing at the Lord’s will be memorable for me. I will always miss the ground where I have played and of course being with the national team,” reads Gauchan’s statement.

“My innings as a player has now ended. I know I have to move on now and life is going to take a new turn. My mission now is to help Nepal play the 50-over World Cup and the prime target is to elevate country into a Test nation if I get support from everyone. It’s tough, but we should not stop dreaming because that is how we played Twenty20 World Cup,” says Gauchan.

Gauchan led the Pokhara Rhinos team in the last season of the Everest Premier League, but let the opportunity for Scottish Captain Kyle Coetzer in #EPL2018.

Although Gauchan could not repeat his magical bowling performance, he managed it decently taking 2-132 from 18.5 overs.

“When I came to bowl at the start of the innings, I realized that these overs were going to be my last. I thought of giving the best. Well, it might sound like a joke but when I came to ball the final ball, I was thinking of not being hit for a four or a six,” Gauchan said in a media briefing. 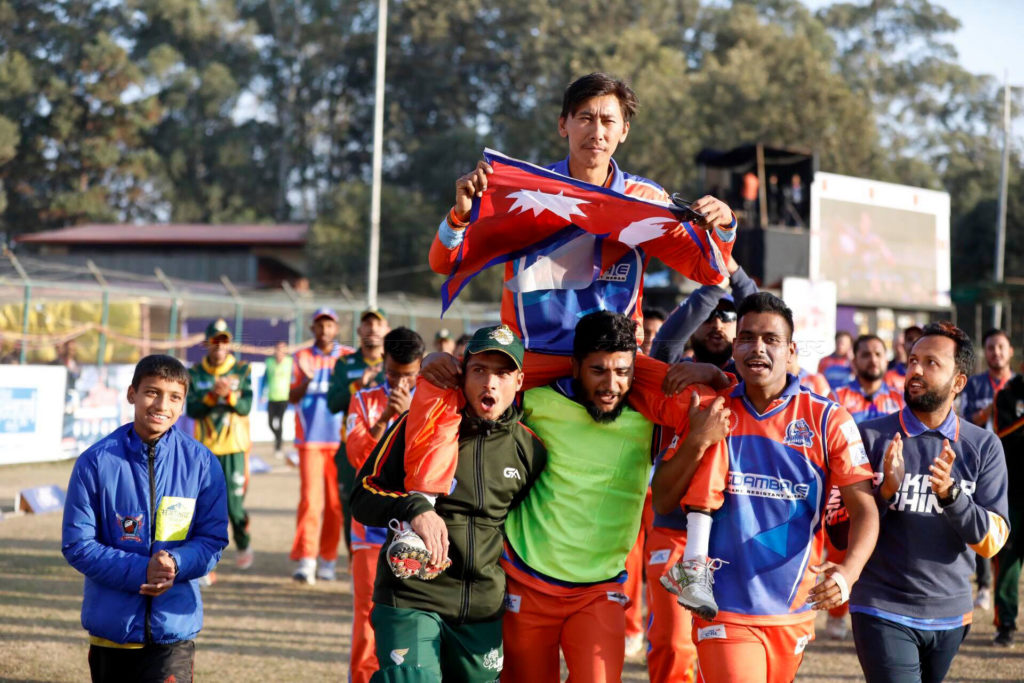 The Conclusion
Thanks to Gauchan who took the Nepali cricket to the next level. Hope Gauchan’s journey and the success tracks of other sensations like Sandeep Lamichhane will inspire and bring more Nepali cricket talents to the limelight. 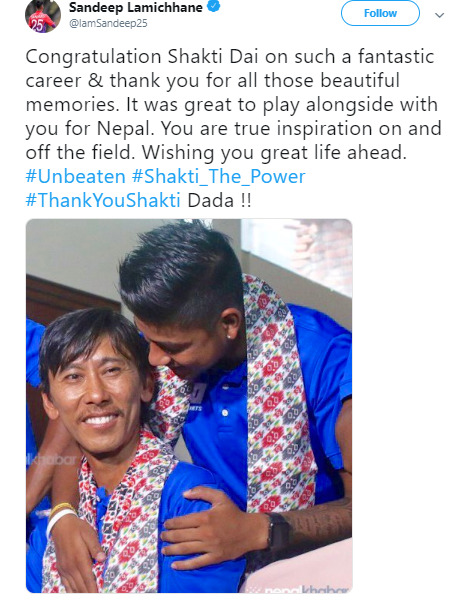