TVS EPL 2018 will be a class-apart event and is sure to give the spectators and viewers a spectacular events, say organizers
Cricket
News
Sports

“TVS EPL has already begun preparations and partnerships to make this year even bigger. Big names from world cricket have already confirmed their presence at this year’s TVS EPL. The TVS EPL organizing team is working hard on making it an absolute class event by adding elements from IPL and international cricket,” says an official release.

In a move drawing more audience, the organizers have increased the number of days of the tournament to 15.

The organizers have already finalized all the logistics with the Nepal Sports Council (NSC) about the necessary requirements for holding the tournament and necessary proposals have also been forwarded to the International Cricket Council (ICC).

“Having received positive feedback over last year’s event, we are confident that ICC will sanction the 2018 event as well,” said Aamir Akhtar, MD, EPL.

Aamir further said that they are increasing their investment and are also bringing in international expertise in ground operations or entertainment adding to the grandeur of the event.

“TVS EPL 2018 will be a class-apart event and is sure to give the spectators and viewers spectacular events, the likes of which they’ve only seen in international leagues.”

TVS EPL 2017 was a big hit with around 60,000 spectators, 2 million viewers globally and had also received applauds from ICC for organizing the sport with international standards.

After getting long-awaited ICC approval, EPL is moving on a faster pace towards the tournament scheduled to be held from December 02-22, 2018.

Putting an end to long suspense and beginning the saga, schedule of the most-awaited EPL 2018 has been released on November 18, 2018. 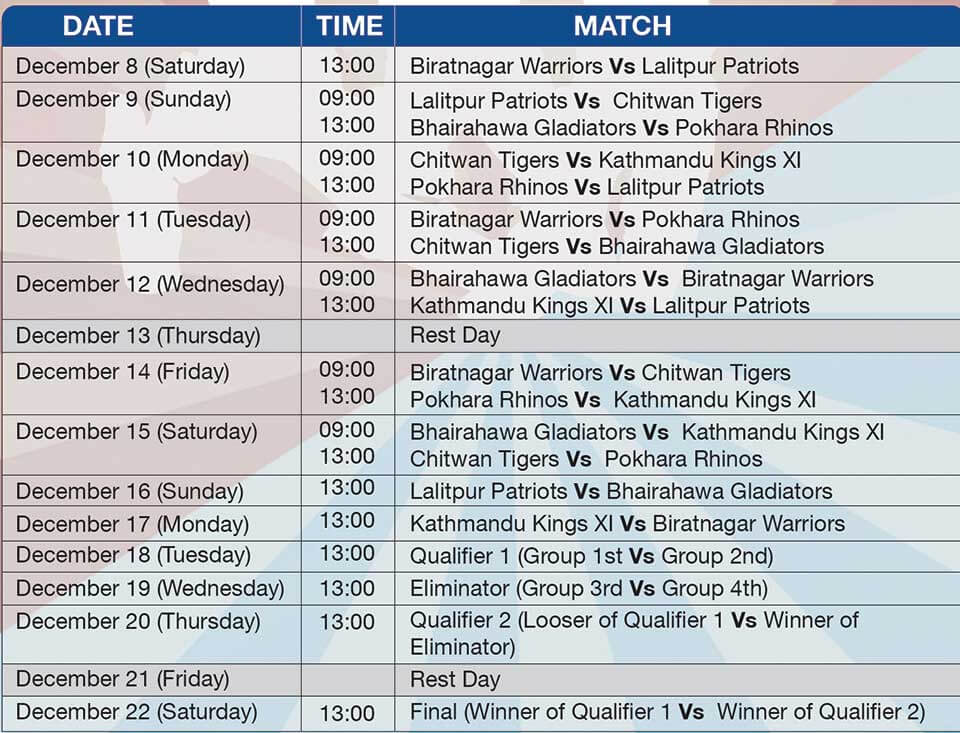 Followed by other matches, the tournament will see the replay of last year’s final between Bhairahawa Gladiators and Biratanagr Warriors on December 12, 2018, while also presenting the Kathmandu Kings XI Vs Lalitpur Patriots match later on the same day.

Finally, the group matches will end with the one between Kathmandu Kings XI and Biratnagar Warriors.

Following this, the ‘Qualifier-1’ match will be held between the topper of the group series and the second-placed team on December 18, 2018, followed by the ‘Eliminator’ match between the third and fourth placed teams a day later.