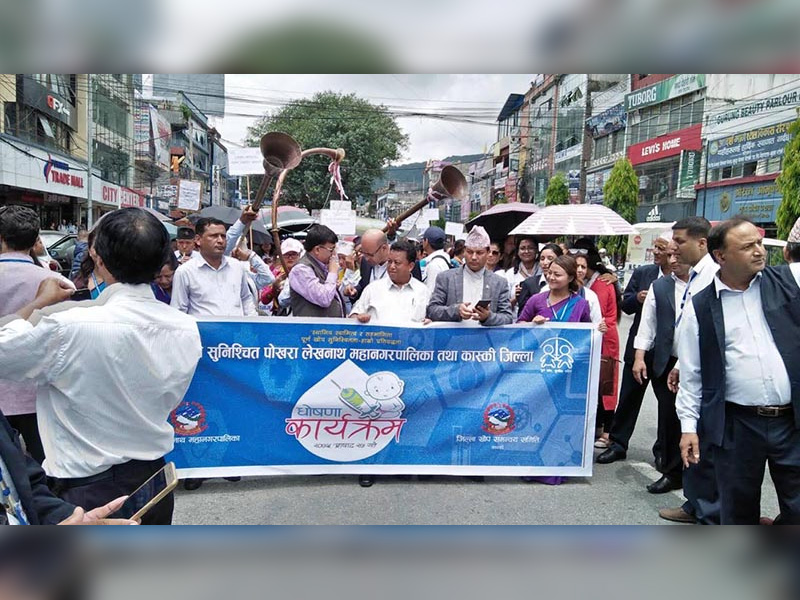 In a public health update, Nepal’s Kaski has been declared as the fully-vaccinated region for its efforts towards the result over the years.

This was announced amid a special program organized in Pokhara on July 11, 2018.

Kaski’s recognition as a fully-vaccinated region is coming as a result of successful immunization campaign held across different wards of Pokhara metropolis.

According to Ek Narayan Lamsal, District Public Health Officer of Kaski, more than 8000 children below 15 years of age in the district are fully vaccinated.

“Children up to the age of 15 months have been administered 11 types of vaccines,” says Lamsal.

Fully Immunized
It is noteworthy that Pokhara is also widely known as a ‘fully immunized metropolis’ and other local levels of the district have already been declared ‘fully immunized’.

After Kaski, now Syangja remains to be the only district in the Gandaki Province waiting for the
‘fully vaccinated’ status.

In his address, Gandaki Province Chief Minister Prithvi Subba Gurung said the government is open for implementation of policies that ensure public health and is also willing to work with central and local governments.

Chapakot Village Development Committee (VDC) was the first to receive the ‘fully immunized’ status three years ago, after which Pokhara sub-metropolitan was declared ‘fully vaccinated’.