Nearly 2.5 million people are leaving the Valley daily and the number is going to rise further till Mahaasthami
Culture
News 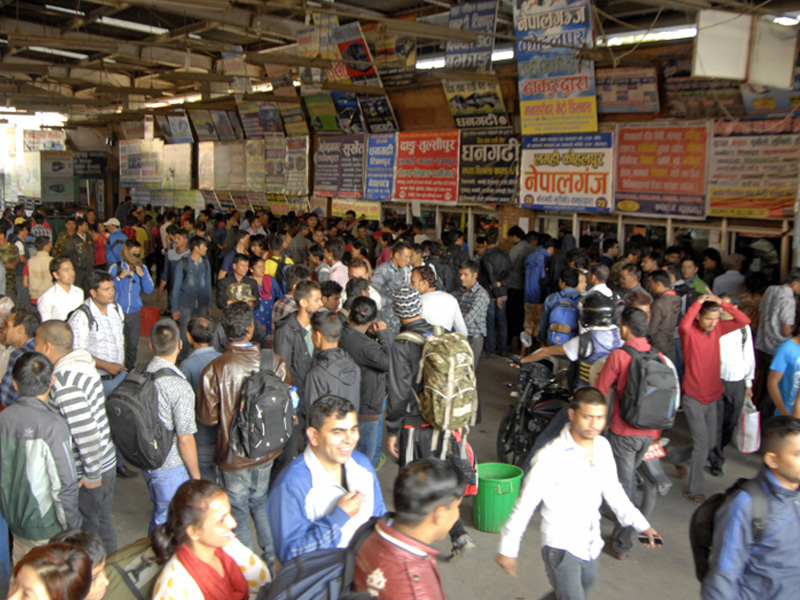 As usual, Kathmandu Valley is falling short of public in view of the ongoing Nepal’s biggest festival season!

As every time, the Valley is witnessing crowds of people leaving it for their homes for Dashain festival celebrations.

According to the reports, nearly 2.1 million people have already left the Valley so far and another 1.6 lakh are most likely to leave in a day or two.

On an average, nearly 2.5 million people are leaving the Valley daily and the number is going to rise further till Mahaasthami.

“Over 2.1 million people have already gone home through Thankot, Dakshinkali, Jagati and Balaju entry points since Ghatasthapana and 1.62 lakh, who have booked flights, are expected to leave in a day or two,” says Raj Kumar Lamsal, Spokesperson for Metropolitan Traffic Police Division Superintendent of Police.

While around 9,000 vehicles operate in the Valley usually, this festive season is witnessing a total number of 17,000 vehicles including buses, mini vans, among others transporting the passengers daily since a week.

The government has set up passenger held desks across 13 centers for easy mobilization of travellers.

Besides, the government has also taken strict measures to ensure safety transport of passengers considering the usual trend of high road accidents during the festival season.