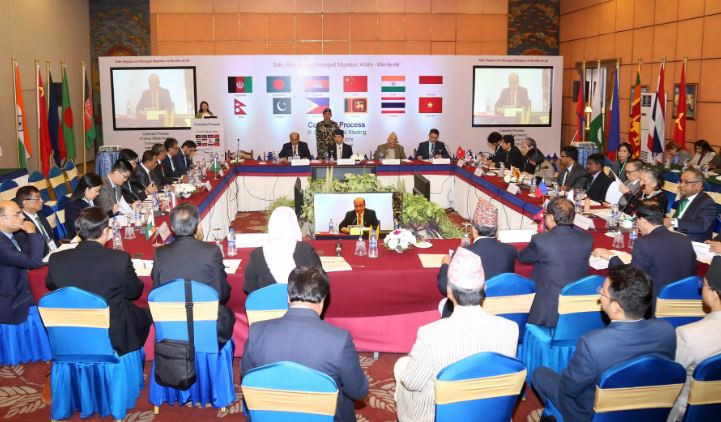 The Colombo Process, a regional consultative process focuses on the management of overseas employment and contractual labor for Asian countries.

Addressing the inaugural program on the occasion, Nepal Labor, Employment and Social Security Minister Gokarna Bista emphasized on the ‘safe labor migration promotion’ because it is a key aspect to both host and source nation.

“Our longstanding agenda to promote safe migration is finally receiving increased attention globally. Migration is increasingly considered as an important vehicle for development of both the host and sending countries. In this context, ensuring human rights of well-being of migrant workers has become a shared reality,” Bista said.

The Colombo Process Senior Officials Meeting’s fifth edition will also discuss implementation of the upcoming Global Compact for Safe, Orderly and Regular Migration (GCM) prepared by these countries with significant inputs to the draft.

“We believe that formal adoption of the GCM in December is going to add importance to regional consultative processes like the Colombo Process. They will play a key role in implementing GCM objectives and actions underlying the global framework,” said Dr. Nenette Motus, International Organization for Migration (IOM) Regional Director, IOM Asia and the Pacific and IOM Delegation Head in Kathmandu.

The final GCM draft will be submitted to UN in Marrakesh, Morocco in December 2018.

Meanwhile, Senior Official’s meeting will prepare a progress report for the 6th Ministerial Consultation (November 16, 2018)on other thematic areas agreed upon by member states including:

The 12-member minister-level meeting will also endorse the Kathmandu Declaration on Labor Migration.