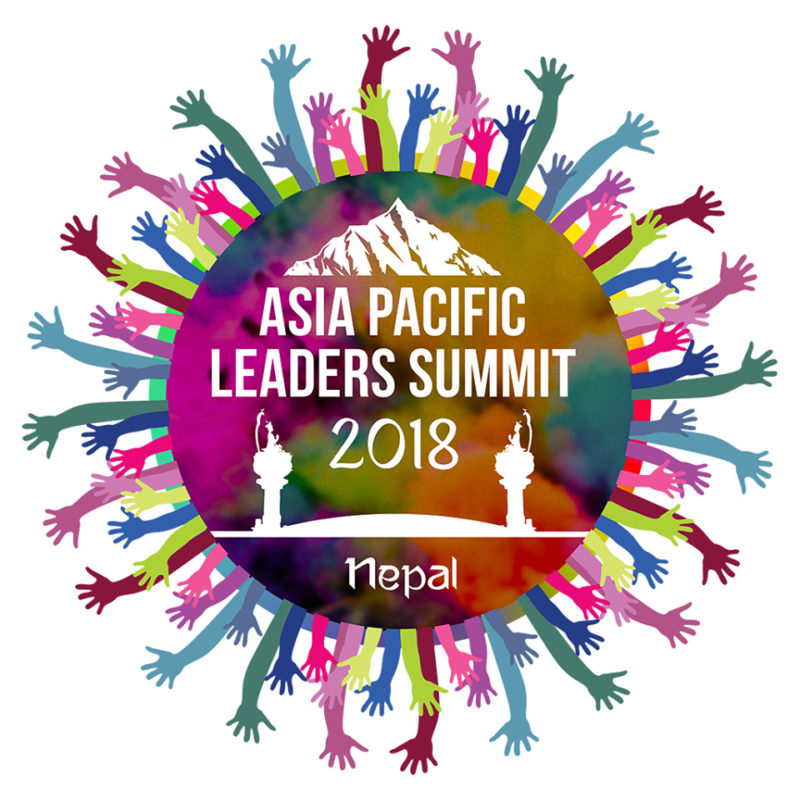 Nepal is currently preparing for the most-prestigious regional summit for Asia-Pacific nations.

The whole world is now eagerly watching Nepal for the Asia-Pacific (APAC) Summit 2018 that is all set to held on November 30-December 03, 2018.

The Summit is being termed as an event of high significance in the world geopolitical scenario, majorly in bringing a strategic shift in the positioning of Asian nations.

Interestingly, the Summit is coming up just days after the recently-concluded Asia-Pacific trade talks in Papua New Guinea, which ended as a major trade war between the world powers.

Various Asia-Pacific countries have already announced their attendance for the APAC Summit 2018 summit and many others are making their plans.

Asia-Pacific Summit 2018 is the first extended international-level summit that Nepal hosted after the BIMSTEC Summit 2018.

The Asia-Pacific Summit 2018 was held on a grand scale with world leaders presenting their keynote addresses and various other attendees and delegates present a wide range of topics such as terrorism, climate change, government-government cooperation, social security, regional development, among others.

Leaders Pitch for World Peace and Climate Change
Addressing the summit, world leaders pitched for measures to tackle poverty and hunger as a means to achieve world peace. 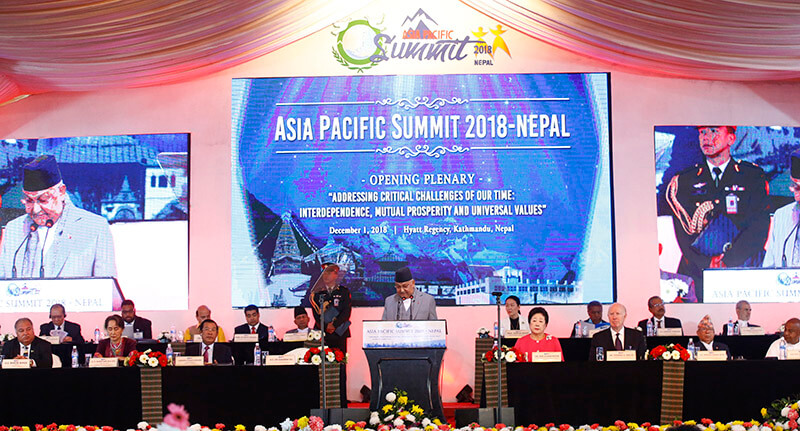 Taking APAC Summit 2018 as the platform, the leaders urged for common agenda and programs in line with changing global context to address common issues. 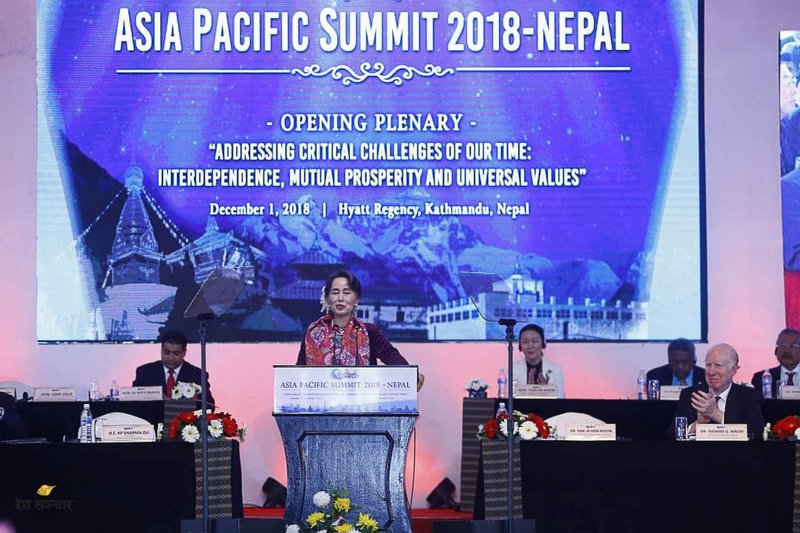 Citing terrorism and human trafficking among the world’s top challenges, the world leaders called on for increased collaboration among countries to tackle them. 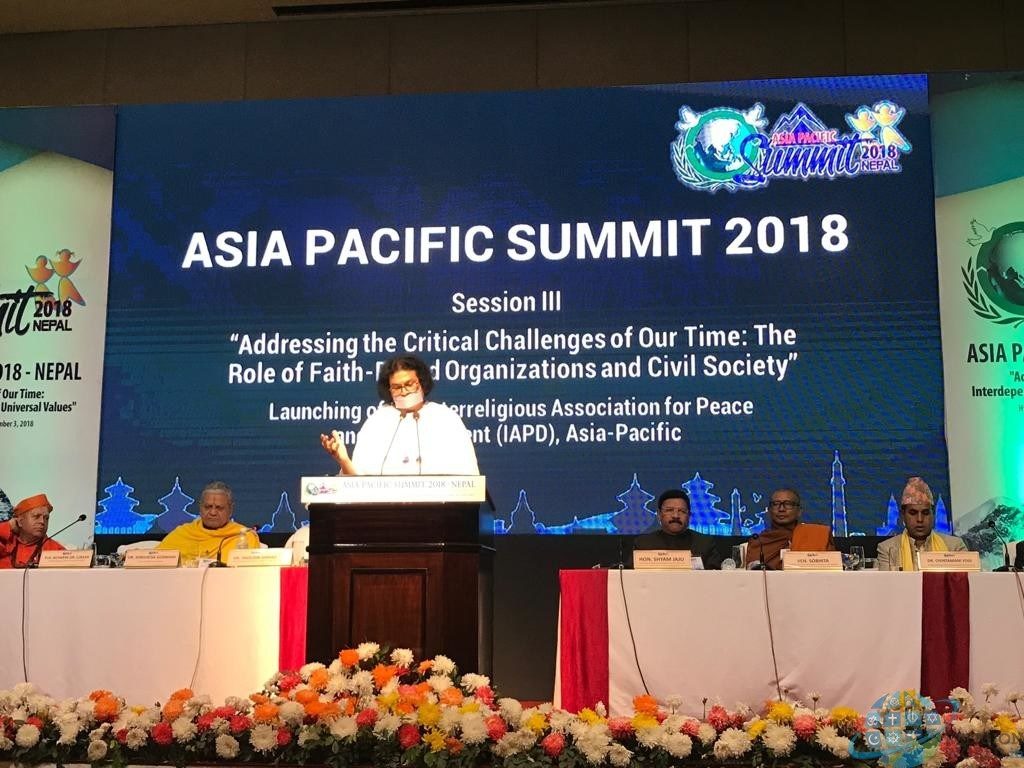 “Collaboration can be the main agenda of peace and development. We have been stressing on it,” said Vice-President of Philippines, Maria Leonor Gerona Robredo.

Head of the State of Samoa Afioga Tuimalealiifano Va’aletoa Sualauvi II pointed at climate change as a serious concern.

Head of the State of Tuvalu Lakoba Taeia Italeni stressed on the need for safeguarding natural resources for present and future generations, and also give youth a proper direction towards education.

Journalism and Social Media Influence
Renowned journalists from several countries, who took part in the Summit, discussed the role of media in the present context, globally. They raised concerns over the rising trend of fake news all across, attributing to the rise of social media influence.

Social media influence is posing a serious challenge to the reliability of actual media sources, they opined. In this regard, they pitched on the need for self-regulation that supports ‘freedom of expression’ and ‘clean journalism’.

Washington Times president Thomas P McDevitt said that this trend is causing a credibility issue on the information. In this regard, Devitt urged the journalist community to pitch for ‘world peace’ in their ‘new media’ strategy. 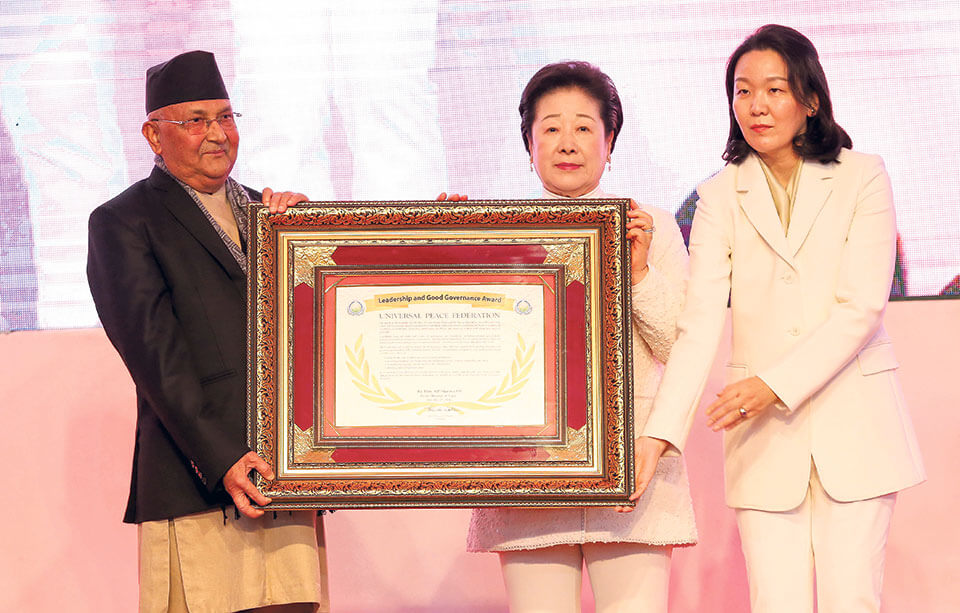 On the sidelines of the summit, the organizer of the APAC summit 2018 Universal Peace Foundation conferred Prime Minister Oli with the ‘Leadership and Good Governance Award’.  The award appreciates Oli for his efforts in performing a leadership role and ensuring good governance across the country. The rare honor included a certificate of appreciation along with a cash prize of USD 100,000.

In response, Oli said he is receiving this award on behalf of the government and decided to deposit the cash in the state fund for Nepali youth and children’s welfare.

The Summit ended with a seven-point Kathmandu Declaration for Peace and Development by Nepal calling the world community to study Nepal’s peace process as an example for conflict resolution.

“The summit appealed to the world community to study Nepal’s peace process where, after a decade of conflict and violence, armed militants handed over their weapons to the United Nations, and together with other democratic parties participated in constituent assembly elections, rewrote the constitution, integrated two armies, restructured the state, formed the federal democratic republic of Nepal—an unprecedented and historic achievement,” reads the declaration.

The declaration called for urgent measures against climate change concerns, women empowerment and creating more opportunities for youth, transforming them into leadership roles.

Other interesting updates about Nepal’s #APACSummit2018

“The government decision to co-host an event that preaches a certain religion violates the spirit of the constitution,” NC said in a release.  Meanwhile, following the controversy, UPF retracted its statement on the UPF official site, renaming Nepal as the Summit ‘supporter’ and not co-host.

2. Operation of Vehicles
On account of the Summit, the Government of Nepal has announced that it would operate vehicle movement based on the odd and even number plate system during four days of the Summit, with effect from November 29, 2018. The prime intention is to facilitate the movement of guests.

3. Expenditure for the Summit
Exactly a day before the start of the prestigious Summit came to limelight, the row over the release of funds for the preparations. Going deep into the matter, the Home Ministry had reportedly asked NPR 320 million funds for preparations of the Summit, a month ago. However, the latest report says that the Finance Ministry did not give its nod and handed over only NPR 20 million to the Home Ministry, denying any fund to the Foreign Ministry and the Department of Roads. The Finance Ministry clarified that the requested fund was almost double to what was spent for the BIMSTEC Summit 2018 (NPR 175 million) for deploying resources.

While, it comes to a surprise that the key organizer of the Summit, UPF is spending NPR 200 million to host the conference.

4. Key Delegate Visits
Myanmar State Counselor Aung San Suu Kyi is scheduled to pay an official visit to Nepal on the sidelines of the APAC Summit 2018. Kyi’s visit is going to be the first such state visit of a Myanmar Counsellor-level official since June 2014.

In another update, The Philippines Vice-President Leni Robredo has also confirmed her Kathmandu visit on November 28, 2018, for the Summit. Robredo will deliver a keynote address on the first day of the Summit on December 01, 2018.

Asia-Pacific Summit 2018 is one of the world’s biggest events with over 500 distinguished guests from around 45 countries and 1500 participants from the Asia-Pacific region alone.

5. A Tight 4-Layered Security
Nepal Government is adopting a four-layer security strategy to ensure the security of dignitaries vesting the country for the Asia-Pacific Summit 2018. Under the plan, around 3,500 police personal are being deployed in Kathmandu. Nepal Army will take charge of the central security layer besides coordinating with the Nepal Police, the Armed Police Force and the National Intelligence Department (NID) in other security aspects.

According to the security personnel, the same technical equipment used for BIMSTEC 2018 will be applied for this Summit as well. For the first time, Nepali police are also planning to use drones for tight security at the event venue.

6. Special Cover to Myanmar Official
Nepal human rights are eagerly about the visit of Myanmar Counsellor & Minister of Foreign Affairs Aung San Suu Kyi, who is set to arrive in Kathmandu for a two-day visit on the sidelines of the Asia-Pacific Summit. As the reports say, human rights agencies are pushing the government to seek the Kyi’s attention to discuss on repatriation of Rohingya refugees in Nepal.

Nepal Human Rights Commission has already requested the government to make their stand clear to the Myanmar Counselor on the safe departure of their refugees in Nepal. Towards this end, the rights bodies are also urging the government to seek international support in this issue. Worried about rights body statements, Nepal Government is planning a security measure to San Suu Kyi.

UPF is the prime organizer of the event, which will also be supported by other partners and supporters including the International Association of Parliamentarians for Peace and the International Conference of Asian Political Parties. This is going to be the next big summit for Nepal in the year after the BIMSTEC 2018! 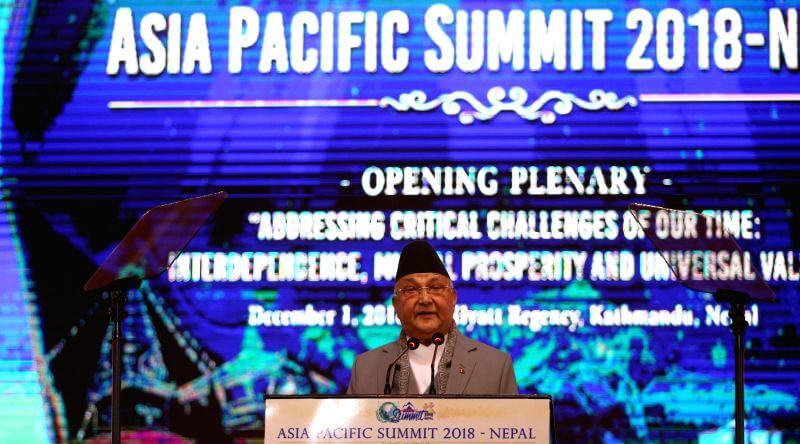 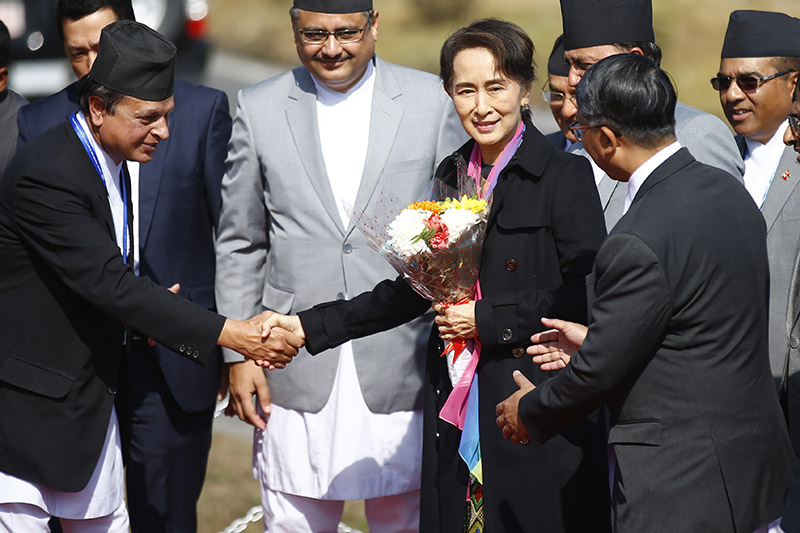 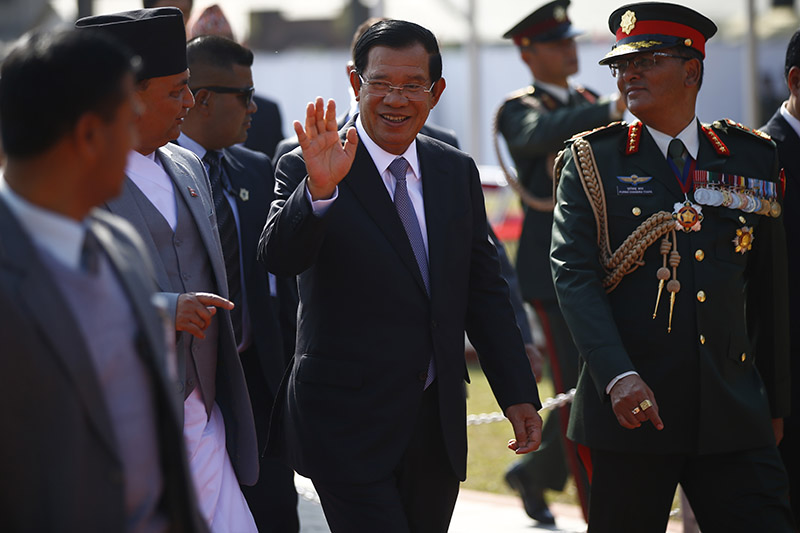 4. Public wait on roads as a result of the odd-even number plate system announced by the government to facilitate free vehicle movement for delegates attending the Summit 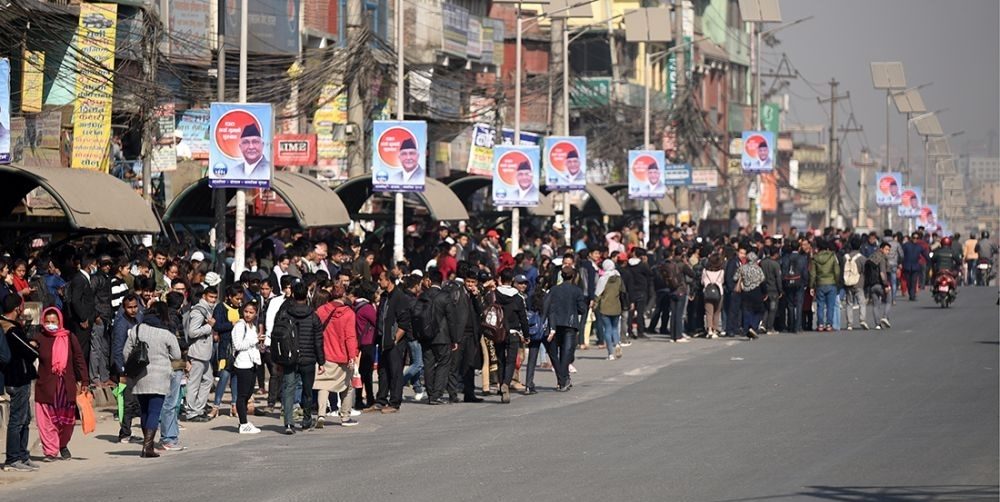