In a match with Singapore, Nepal stood as the winner for its highest base run rate
Cricket
News
Sports

In a match held at the Bayumas Oval in Kuala Lumpur on October 12, 2018, Nepal won over Singapore finishing the 81-run target in 17.3 overs.

While Sandeep Lamichhane claimed a total of four wickets, the other two got two each, followed by Lalit Rajbansi and Basanta Regmi who claimed one each. By winning 24 wickets in total, Sandeep stood as the ‘Player of the Series’ for his stunning performance. 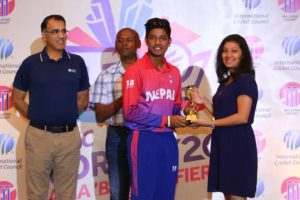 The match was bit disappointing for the viewers as it started raining at the initial stages after Nepal began its batting order. However, Nepal was declared the winner!

Though both teams entered finals with 11 points each drawn from the league, Nepal stood as the champion for its higher basis run rate than Singapore.

“It has been a well-disciplined, clinical tournament for us with everybody up to the mark irrespective of our opponents. We had to play to our standards and glad that we were able to do that,” said Nepal National Cricket Team Captain Paras Khadka.