Swimming, A High-esteem Sport for Nepal

The Nepal Swimming Association (NSA) is the governing body for the sport in Nepal and is associated to the Nepal Sports Council.
Special Stories
Sports

Nepalis always surprise you with the skills and talents they possess in various sports, and Swimming is no exception!

Nepal makes it evident that is keen on establishing itself as a nation who wants to carve a niche for itself in every aspect, be it economic development, tourism, food culture or sports.

The country is home to some of the skilled swimmers in the world, the latest to the addition being 14-year old Gaurika Singh. This reminds us that age has no limit when it comes to pursuing your passion!

Swimming – A sport of international level
Swimming as a recreational sport has been observed since prehistoric times but became popular as a competitive world sport in the 1830s in England. By 1837, swimming competitions were being held across London by the National Swimming Society. The year 1880 saw swimming grow as a recreational sport, which led to the creation of the first national governing body, the ‘Amateur Swimming Association’. From 1882, other European countries like Germany (1882), France (1890) and Hungary (1896) began to have their own swimming federations.

With the growing progress of the sport, the need for a governing body was realized and so the ‘Fédération Internationale de Natation’ (FINA) also known as ‘International Swimming Federation’ was formed in 1908.

Styles:
The beauty of this sport is that it has different styles to it. The most important styles recognized globally are as follows:

Swimming in Nepal
The Nepal Swimming Association (NSA) is the governing body for the sport in Nepal and is associated to the Nepal Sports Council. The country has produced some of the most talented swimmers.

Laurels for Nepal in Swimming
When it comes to swimming in Nepal, two names shine the brightest among the rest: Shirish Gurung and Gaurika Singh. Their record-shattering performances nationally and internationally have given Nepal a promise of a bright future in swimming.

In 2017, the duo was selected for Rio Olympic Games for their performance in the qualification rounds held at Russia and Dubai. Apart from Gurung and Gaurika, seven Nepal athletes also participated in different sports in the Rio Olympics. 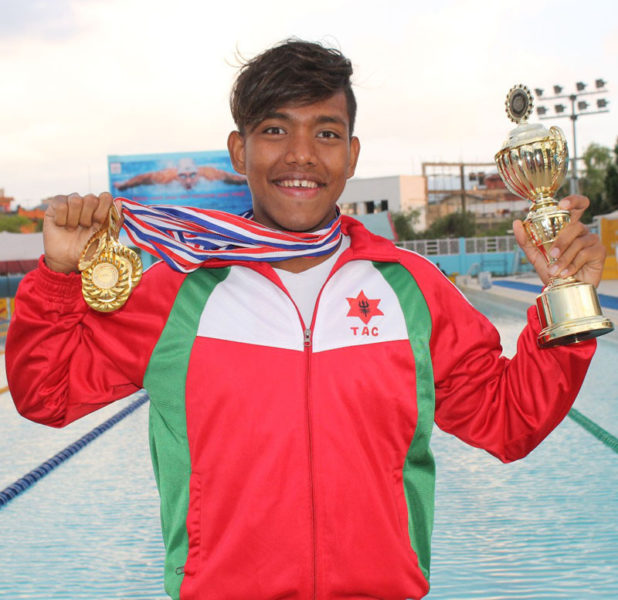 The name that is reckoned with success in the Men’s swimming category is Shirish Gurung. This 20-year old star kid hails from Kathmandu and already has many laurels to his credit.

The lad smashed the national record of Nepal at Rio when he completed the 100-m freestyle swimming in flat 57.76 seconds in Heat 2.

The Tribhuvan Army Club swimmer is a proud winner of more than 15 national records including 12 solo-records and three team records. It is great to see the rewards and recognition this young lad has received in his maiden days at swimming. Gaurang has a dream to pursue a career in medicine and is known for his quick learning ability. 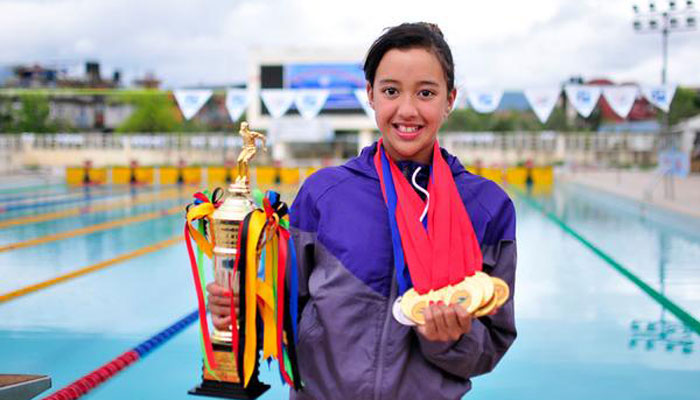 The more we talk about her, the less it is about this Who would have thought that a 14-year old tiny tot would take on the world and shatter records?

Yes, we’re taking about none other than Gaurika Singh who surprised the world with her menacing swimming skills.

The youngest of nearly 11,000 athletes at the Summer Games, Singh took part in Heat 1 of the Women’s 100m backstroke in August 2016. Singh’s participation was on behalf of the universality program managed by FIFA and she finished first in the three-person heat against Evelina Afoa of Samoa and Rita Zequiri of Kosova.

Also in 2016 in Rio she got to be a part of the ‘big screen’, the Olympic Games. Even though she finished 31st among the 34 swimmers, it did not dim her spirits.

A native of Nepal, Singh is currently a UK citizen and lives with her parents in London.

We are proud of this little lass and look forward to seeing her make more victories for Nepal.

In August 2017, the foundation stone for the heated swimming pool was laid in the premises of the International Sports Complex. The initiative came after the Memorandum of Understanding (MOU) was signed by the NSA and the NSC. The stone was laid by the Minister for Youth and Sports Minister Rajendra Kumar.

Nepal organizes a number of competitions in-house that prepare young talents for the bigger ocean!