World No Tobacco Day: A Reel Through Nepal’s Struggles, Initiatives and Implementations

May 31st is celebrated as the ‘World No Tobacco Day’, internationally, every year!
Health
News
Special Stories 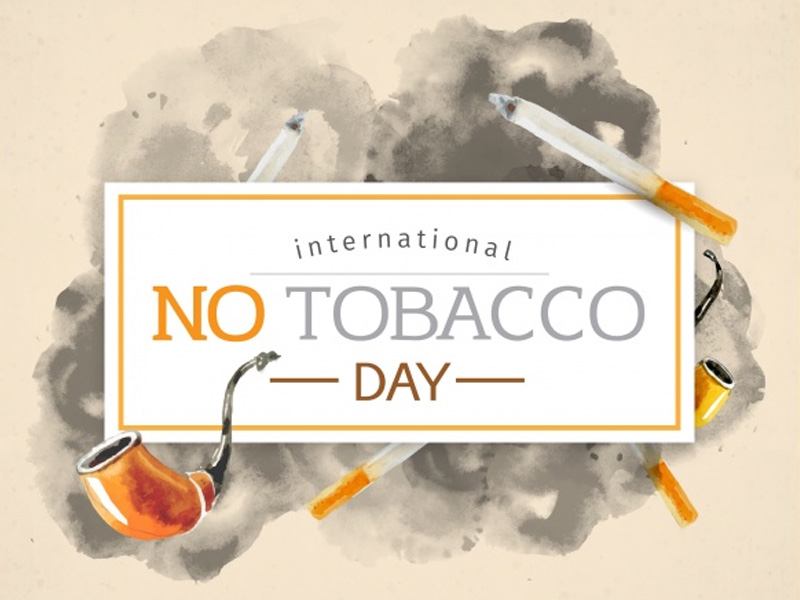 Nepal has been addressing many of the issues that threaten the health and life span of its population. It has been constantly working to fight diseases like thalassemia, hemophilia, diabetes and many others.

It’s recent achievement in eliminating trachoma speaks of how dedicated the country is towards its health initiatives!

However, among many health issues that plague Nepal, the chronic condition of the people involved in tobacco consumption has been haunting the country for quiet some time now.

Despite the progress that Nepal has made in controlling tobacco consumption in the recent years, people continue to die and become sick unnecessarily. It has been observed that there is a steady rise in the price that the society has to pay due to tobacco consumption. And that is why, Nepal has a long way to go in terms of curbing this life-threatening practice.

Each year, more than 27,100 Nepalis die due to tobacco-caused disease. Despite this, it has been noted that more than 21,000 children between the age group of 10-14 years and 37,45,000 adults above 15 years continue to use tobacco each day! Insufficient steps towards the epidemic has encouraged the Nepali tobacco industry to continue its production and increases the death-toll each year.

The economic costs of smoking add up to 22, 942 million Nepalese rupees. This cost includes direct costs on healthcare expenditures and indirect costs on lost productivity due to early mortality and morbidity.

The combined revenue of the world’s six largest tobacco-producing companies in 2016 was more than USD 346 billion, which is 1513% larger than the Gross National Income of Nepal.

In 2014, Nepal produced 2,329 metric tons of tobacco. However, the country has only 0.04% of its agricultural land dedicated to tobacco plantation.

Initiatives to Curb Tobacco Usage in Nepal since January 2018

The History of ‘World No Tobacco Day’

May 31st is celebrated as the ‘World No Tobacco Day’, internationally, every year.

Although the member states of the WHO started the’ World No Tobacco Day’ in 1987 with the vision of drawing global attention to the tobacco epidemic and the harm it causes, May 31st in 1988 came to be known as the day dedicated to ‘No Tobacco’ after Resolution WHA42. 19 was passed. 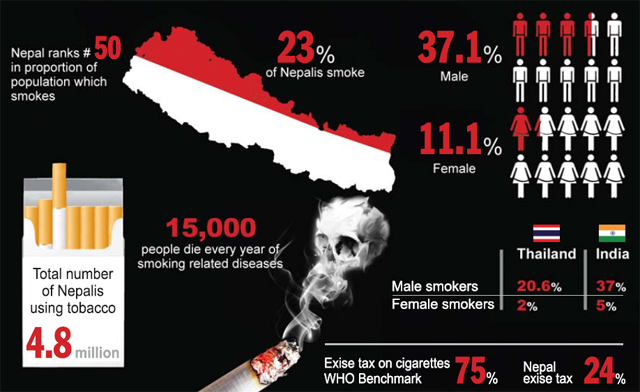 In 2018, the WHO and its partners decided to emphasize on ‘Tobacco and heart disease’ as the theme for the ‘World No Tobacco Day 2018’.

Under the theme, WHO lays it focus on:

As per a document compiled on the basis of the theme, tobacco kills over 7 million people every year, which means more than 19,000 people die from tobacco consumption and secondhand smoke exposure.

Yes, tobacco can be deadly for non-smokers as well. Secondhand smoke contributes to heart disease, cancer and other diseases, resulting in around 890,000 premature deaths each year.

How does Tobacco break hearts?

Tobacco smoke contains over 7,000 chemicals and is divided into two phases, a particulate phase and a gas phase.

These pathophysiological effects of tobacco predispose both active tobacco users and passivesmokers to the formation of atherosclerosis or narrowing of the arteries, leading to various types of CVD such as ischaemic heart disease, cerebrovascular disease, peripheral artery disease and aortic aneurysm.

The WHO has recommended that awareness on tobacco be carried out through means of counselling through toll-free quite lines and mobile text messages. Mentioned below are some interesting health benefits:

We hope to see that Nepal’s government and people work collaboratively to create and implement policies and rules that the will rid the nation of this hazardous epidemic.