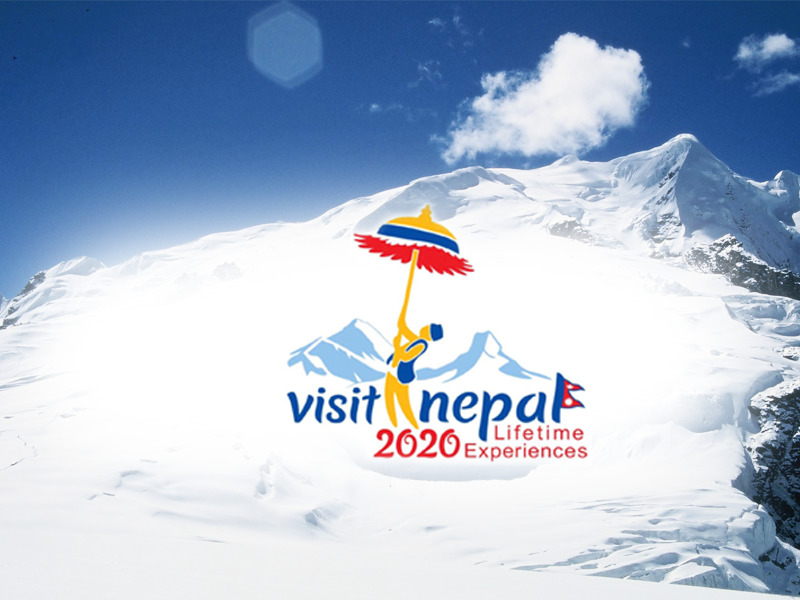 Encouraged by the 2018 tourist arrivals, Nepal tourism began its 2019 journey on a positive note and is hoping to see much bigger results at the end of the year.

The country has already started witnessing interesting numbers in its tourism activity, right from the very first month of the year.

Driven by the Visit Nepal 2020 promotional activities, the country saw a decent progress in 2019 as well.

Like every year, the Himalayan nation received the highest number of tourists from India totaled 209,611, followed by China (169,543), among others.

According to the Department of Immigration, the arrivals from UK, Sri Lanka, Thailand, France, South Korea and Spain declined this year compared to the previous year.

According to the Tourism Board, cancellation of flights due to unexpected circumstances, halt in flight operations by some international airlines and renovation works at the Tribhuvan International Airport have majorly hit the tourist arrivals in 2019.

Tourist arrivals jumped by 8 percent to 975,557 visitors between January-October 2019, compared to the same period last year.

As Nepal draws closer to its biggest tourism campaign Visit Nepal 2020, the country is witnessing an influx of tourists that went up by 10 percent as of October 2019.

This data has been compiled by the Nepal Tourism Board (NTB), which recorded a total of 143,870 tourists in October as compared to a total of 130,745 visitors in the same period last year.

Following is the list of countries which marked a majority of tourist arrivals to Nepal:

Speaking about the progress made by Nepal in terms of tourism, NTB Chair Deepak Raj Joshi said that the growth of visitors was made possible only because of the collected efforts of the private sector, diplomatic missions, Nepali diaspora and other similar stakeholders.

Recently, the Nepal Tourism Minister Yogesh Bhattarai had also traveled to the United Kingdom to announce the Visit Nepal Year 2020 campaign from the British Parliament.

According to the tourism authority, Nepal recorded a total of 585,531 tourists in the first six months of 2019, depicting a 12.6 percent growth Y-o-Y. This number includes tourists who travelled to Nepal by air and land routes.

Following is the list of top five countries visiting Nepal and their contribution to Nepal’s tourist inflow in the first six months of 2019: 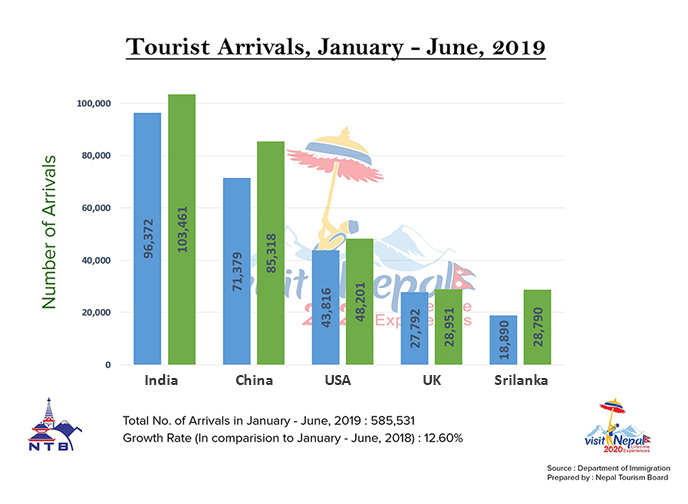 European countries also make up for a significant share of tourists in Nepal, with this year’s contribution being 104,783.

United Kingdom and Germany contributed to 28,951 and 18,607 of Nepal’s tourist population, respectively. Both countries depicted a growth of 4.17 percent and 12.8 percent Y-o-Y.

The above statistics present a positive outlook of Nepal tourist visits in the year 2020. Let’s wait and watch to see how successful the biggest Nepali tourism campaign turns out to be.

Nepal reported a decent rise in tourist arrivals in the first quarter of 2019, 15.3 percent rise over the previous year.

As per the latest reports, the country has received a total of 445,109 international tourists during the first four months of the year from January-April 2019.

According to the Immigration Department, a total of 362,480 international visitors by air while 82, 269 visited by land.

Overall, the first months of the 2019 showed a positive trend for Nepal’s tourism numbers!

Nepal registered another new high in its tourist arrivals numbers. According to the Department of Immigration, the country saw around 124,421 foreign tourist arrivals in February 2019, showing a 35 year-on-year rise.

As per the statistics, a total of 97,694 international visitors entered the country by air and the remaining 26,727 have come in via border points.

“Overall arrivals from SAARC countries registered a sturdy growth of 85 percent over the same month last year with 31,831 total tourist arrivals,” Nepal Tourism Board (NTB) said in a statement.

China topped the list with 16,205 tourist arrivals in February 2019. According to the department, the number of arrivals from Thailand, Japan and South Korea in February 2019 have increased by 109 percent, 20 percent and 47.2 percent, respectively, year-on-year.

Meanwhile, arrivals from UK, Germany and France saw 8.7 percent, 27.9 percent and 7.6 percent, respectively, making up to 17,789 arrivals from European region in February 2019.

Arrivals from US registered 5 percent Y-o-Y growth, while Australia has shown 17.4 percent growth.

According to Nepal Department of immigration, these numbers show a cumulative rise of 25.4% Nepal’s tourist arrivals in the new year, compared to January 2018.

SAARC region, as a whole, contributed to a 11.6 percent rise so far accounting to a total of 17,432 total tourists. 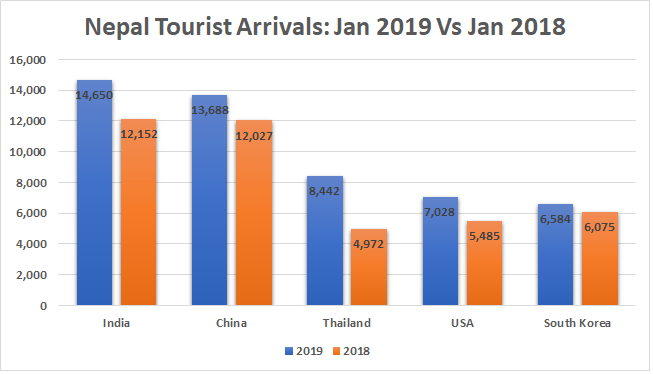 Nepal Tourism Board (NTB) is elated at this positive start!

“We appreciate the support from media and all tourism stakeholders for the sustained growth that has well continued in 2019. This growth has encouraged us to work even harder to harness the strengths of both public and private sector in the days to come,” NTB CEO Deepak Raj Joshi said in a statement.

“The landscape has now changed as growing number of Chinese and Indian visitors coming to Nepal in the winter. There is no off-season now,” says Kalyan Raj Sharma, Managing Director of a trekking agency ‘Adventure Outdoor’.

It is noteworthy the country has already been executing different programs in a move to attract more tourists this year. Buddhist Circuit Tour 2019, Asian Rural Tourism Festival 2019 are ones in that direction towards drawing more tourists in line with the Visit Nepal Year 2020 Campaign.

Hope the spirit would continue and get more tourist arrivals to the nation in the months to come throughout 2019.