“Every month, the working age population increases by 35,000 people and Nepal must create 286,900 jobs a year to maintain its employment rate,” WB said in its recent report
Immigration
News
Special Stories 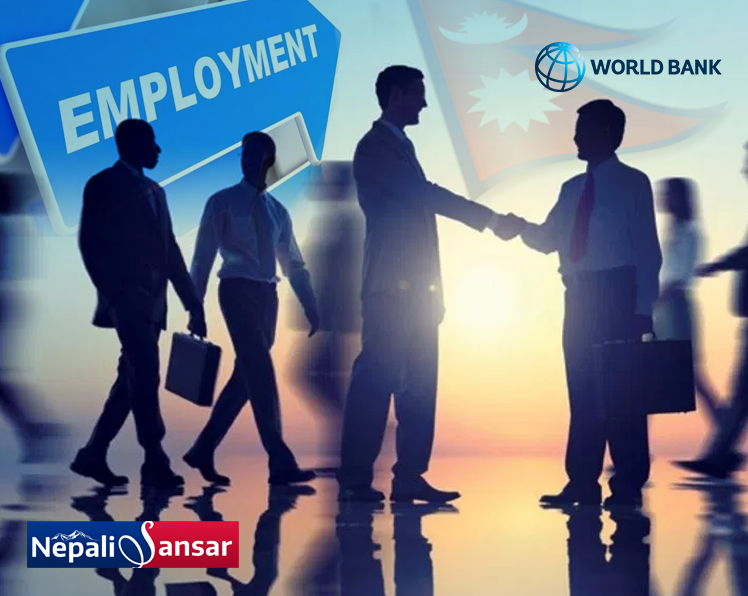 The World Bank (WB), in its recent report, came up with some alarming observations on the employment situation in Nepal.

In its recent report titled ‘Jobless Growth?’, WB recommended a rise in job creation for Nepal to meet the employment needs of the gradually-growing working age population.

“Every month, the working age population increases by 35,000 people and Nepal must create 286,900 jobs a year to maintain its employment rate,” WB said in its report.

Stating that the growth rebound is inconsistent across economies, the report noted that the exports remain weak despite the accelerating global growth and trade.

However, a slow recovery was observed in case of Nepal.

“Nepal has seen an economic recovery after disruptions from earthquakes and a trade blockade, but growth is expected to slow from 7.5 percent in fiscal year 2017 to 4.6 percent in 2018 due to the heaviest floods in decades combined with slow recovery of exports, slowdown in remittances, and an increase in lending rates,” the report added.

WB’s twice-a-year South Asia Economic Focus (SAEF) report made these observations as part of its assessment on the overall growth of South Asia.

According to Martin, “more than 1.8 million young people will reach working age every month in South Asia through 2025 and the good news is that economic growth is creating jobs in the region.”

To control the gaps in employment rate, the report urged South Asian economies to create a minimum of 1.17 million jobs a year.

“Growth is important, but even very high growth will alone not be enough to increase South Asia’s employment rate. Policies and actions are needed to make growth more labor-intensive, and especially to create the kinds of jobs that can encourage greater labor force participation by women,” says Robert Beyer, the report author.

Status of Employment in Nepal

Over the years, there has been a growing trend of inclination for foreign employment among Nepali working age population, especially the youth, due to the lack of employment opportunities locally.

As a result, Nepali working population have been migrating to the foreign destinations such as Malaysia, Singapore and Gulf countries, majorly. The first eight months of the current fiscal saw at least 1,026 migrants per day to various overseas labor destinations.

However, there is also a declining trend being observed over the last two fiscals with regard to overseas labor migration. This trend is encouraging the need for creation of more jobs, locally. 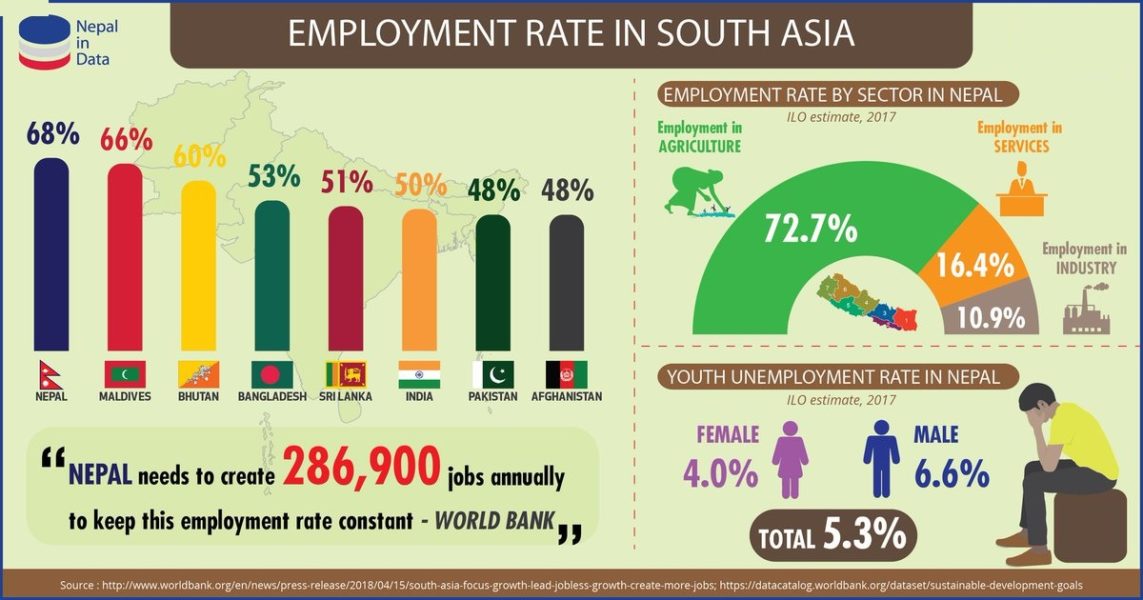 The Economic Survey of the Ministry of Finance was quoted to have reported the addition of a minimum 512,000 youth population to the Nepali labor market, annually.

While the number of new entrants to the Nepali labor market stands at more than 42,000 people per month in the last fiscal, the number is expected to grow further in the coming years owing to the declining dependency ratios.

However, when it comes to the employment, the unemployment rate among youth aged 15-29 years stands at 19.2 percent compared to 2.7 percent for the whole population.

“Over 400,000 young people are estimated to enter the labor force every year. These figures indicate the quantitative dimension of the employment challenge in Nepal,” says ILO.

Basic employment-related challenges in Nepal are attributed to the predominance of employment in the informal segments of the Nepali economy with low productivity and earnings, and poor working conditions, resulting in underemployment in the country.

Higher incomes and dignity of labor are among other aspects contributing to the rise in migration for foreign employment.

As a Solution: The Government of Nepal had on many occasions urged ILO for its support to enhance job opportunities within the country. Towards this end, ILO worked with the Nepali Government in developing a comprehensive national Employment Policy and is also assisting towards the effective implementation of the same with special focus on informal economy, social protection and youth employment. To monitor the changing trends, ILO is working in collaboration with the Central Bureau of Statistics (CBS) of Nepal to develop employment monitoring and evaluation tools. The organization has also extended its technical support for the labor market reform in the country resulting in a modified labor bill. This has further moved Nepali Ministry of Labor to bolster the public employment services thus contributing to the possible rise in employability across the country.