The tournament will be held during January 8-21, 2018
Cricket
News
Sports 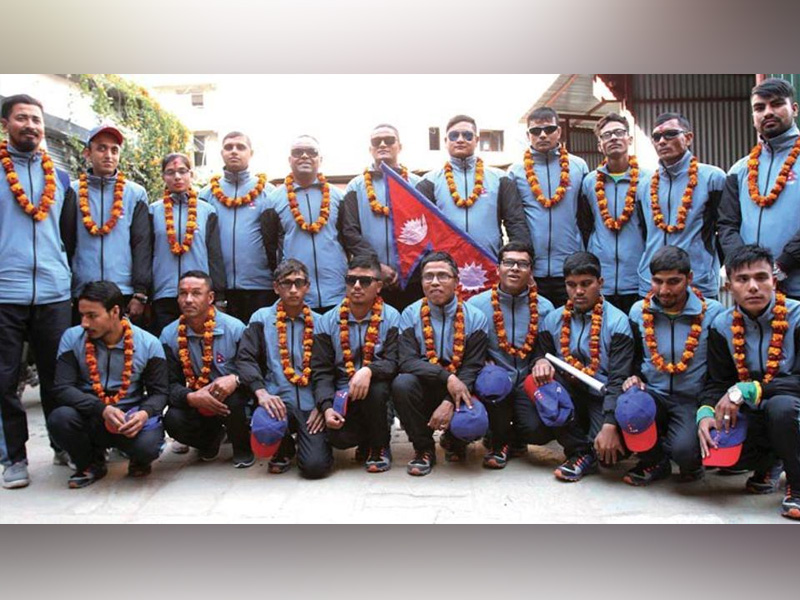 After a successful start in 2018 with Taekwondo championship, Nepal began its journey for another sports event– Blind Cricket World Cup 2018.

Nepali blind cricket team is currently on Pakistan tour for the fifth edition of the championship jointly hosted by the United Arab Emirates and Pakistan.

This tournament, to be held during January 8-21, 2018, will see first match between Nepali and Bangladeshi teams at Lahore Gymkhana grounds on January 8, 2018.

Following this, Nepal will play three other matches in Pakistan and two in UAE. After Bangladesh, Nepal will be playing with the Indian team at Faisalabad on January 9 and with Pakistani team at the Jinnah Stadium on January 10, 2018, respectively.

Then the Nepali team leaves for UAE to take on Australia at the MCC Ground in Ajman
on January 13, 2018 and also end its league campaign with Sri Lanka match at the same venue.

The semi-finals and final matches of this blind cricket tournament will be held at Ajman and Gaddafi Stadiums, respectively.

“Our target is to reach the semi-finals this time. We know that Pakistan, India and Sri Lanka are the best teams in the tournament,” says Nepali blind cricket team captain Kirtan Shrestha Duwal.

The top four teams after the round-robin league will advance to finals.

“We feel that Australia and Bangladesh are just slightly above us in terms of strength. If every one of us up our games a little bit, we can make it to the last four. For the first time, our preparations have been very good for the World Cup and we are very positive to play well,” Duwal added.

Speaking on his team’s preparations for the tournament, the Cricket Association of Blind (CAB) Nepal President Pawan Ghimire said, “We must say that we have had the best training and got good amount of assistance from Nepali national cricket team coach Jagat Tamatta. We are hopeful that we can come up with desired results.”

The Nepali blind cricket team is gearing up for this tournament with an experience it has gained from the past through the 2017 Twenty20 World Cup for Blind, among others.

It is noteworthy here that Nepal left a special mark in the blind cricket history with an outstanding victories over South Africa and New Zealand in the 2017 Twenty20 World Cup for Blind held in India.

This tournament will be Nepal’s third such tournament in the global cricketing event for the visually-impaired players.

Nepali team will be playing a 40-over World Cup for the first time through the Blind Cricket Tournament 2018.