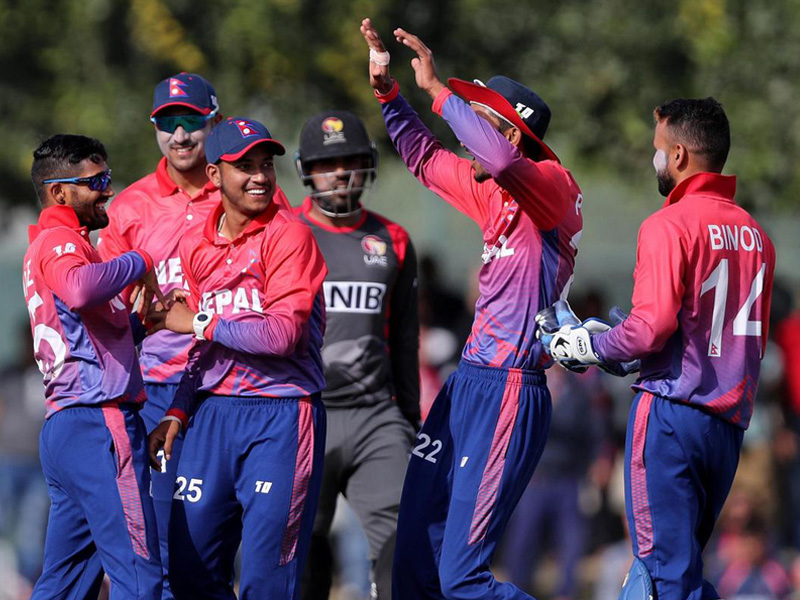 In a historic win for Nepal, the national cricket team won its first-ever ODI series against UAE in Dubai on January 28, 2019!

The final match also marked Nepal’s first ever ODI target of 255 runs from 44.4 overs, which is its highest ODI total.

UAE was slated to bat first after losing the toss at the ICC Academy Oval stadium in Dubai. The team lost luck in the early stages of the match and managed to secure only 47 runs until the 21st over.

However, CP Rizwan and Shaiman Anwar’s 100-run partnership helped them register a grand total of 254 runs.

When it was Nepal’s turn, the team lost its first wicket in 4.3 overs when Ghulam Shabber sent Binod Bhandari off the field.

Besides, Sompal Kami and Aarif Sheikh made significant contributions by scoring 26 and 21, respectively. It was Kami’s winning sixer that finished the match and drove Nepal to its victory.

Paras Khadka was declared ‘Man of the Match’ & ‘Player of the Series’! 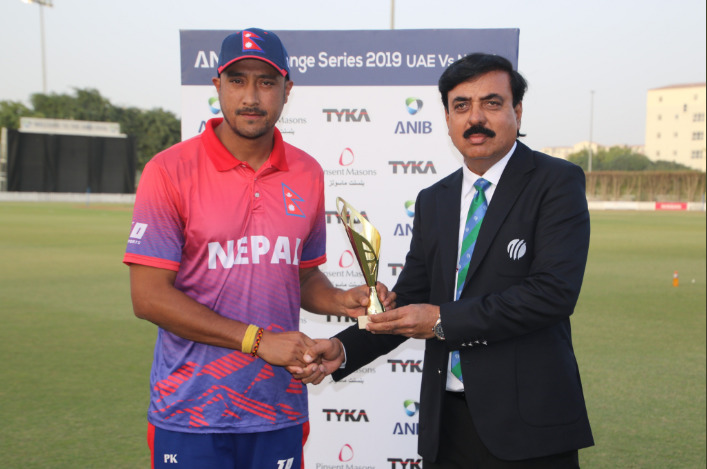 The match between UAE and Nepal on January 26, 2019 saw the rising of Nepal’s Rohit Kumar Paudel! This young lad’s half-century proved to be a huge contribution to his own cricketing career and Nepal’s 242-run victory against UAE.

It was also Sandeep Lamichhane and Sompal Kami’s 9-wicket partnership that made UAE crumble at just 97 runs in 19.3 overs. Lamichhane and Kami took four and five runs respectively to give UAE a smashing defeat by 145 runs, leveling the UAE-Nepal scorecard to 1-1.

On the batting side, the match began on a promising note for Nepal with openers Gyanendra Malla and Binod Bhandari contributing 61 runs from their partnership.

However, after Bhandari fell prey to Amir Hayat with just 21 runs to his credit, Nepal began to witness a showdown of wicket losses for Malla at 44 runs, Dipendra Airee at 10, Pawan Saraf at 8 and Paras Khadka at 21.

Nepal was beginning to see defeat when Paudel and Sheik stepped in to register a fantastic partnership of 82 runs.  Paudel’s 55-run contribution had a fair share of seven fours giving Nepal the much need impetus. 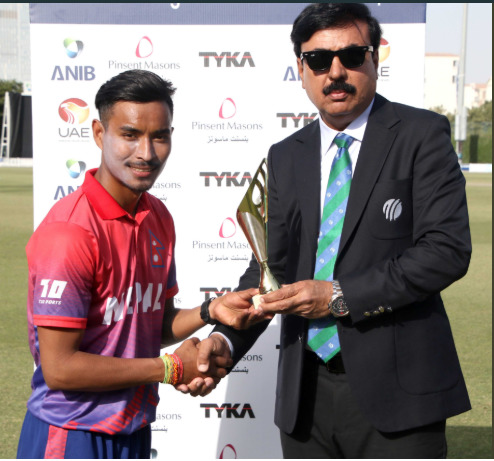 Nepal’s delightful performance was sealed by the likes of Karan KC and Lamichhane. When the opponent got to batting, Lamichhane guarded Nepal’s position by sending off Rizwan at 16 runs and Farhad Nawaz in the next ball!

Furthermore, Usman bid farewell to the game with Lamichhane’s attack, while Zahoor walked out after Kami bowled him after a mere 8-run contribution. 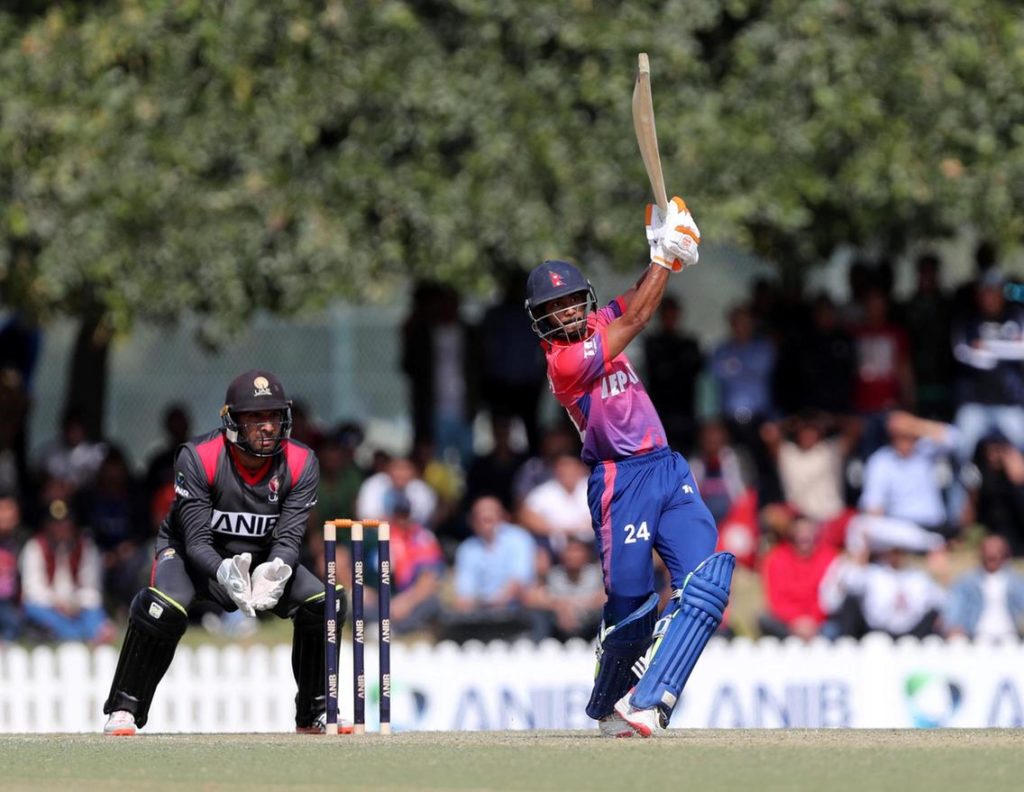 Nepal succumbed to UAE in the first match of the three-match ODI in Dubai with a score of 113.

UAE’s Aamir Hayat and Imran Haider were instrumental to their team’s first-day victory.

Nepal kept losing wickets at regular intervals, which was paired by a poor contribution of runs from four of their batsmen.

Captain Khadka and Sompal tried to maintain Nepal’s position but lost foot at 44/2 runs when Aamir Hayat sealed their fate.

After four overs, Nepal could barely secure 81 runs due to Hayat’s strict defense.

However, Lamichhane and Sheik’s 50-run partnership led Nepal to secure a 3-digit total, past the 100-mark. 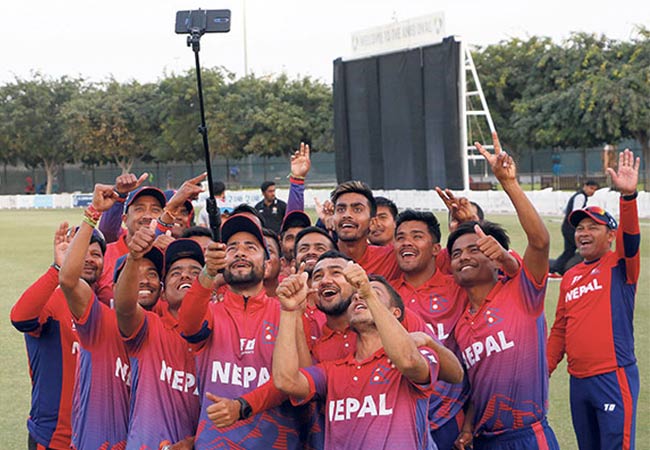 All’s well that ends well! Nepal has made some significant contributions to world cricket with this remarkable ODI performance at UAE. We hope for many such victories.