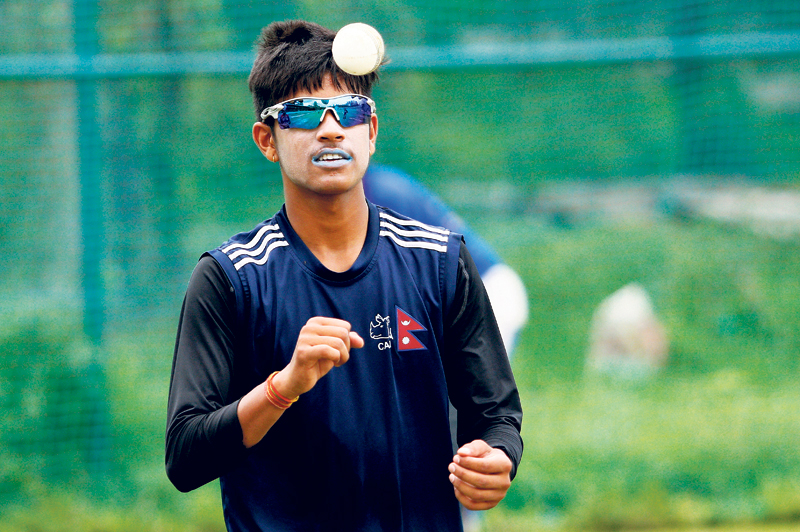 In an update for Nepali cricket, the country’s famous leg-spin bowler Sandeep Lamichhane has been selected for the Indian Premiere League (IPL).

In the IPL auction held in Bengaluru (India) on January 28, 2018, Indian IPL team Delhi Daredevils proposed Sandeep’s name making him the first Nepali cricketer to get featured in IPL.

Surprisingly, Sandeep was compared to the world’s renowned Australian spinner Shane Warne and was priced INR 2 million in the auction.

“The first Nepali player in the history of the Vivo IPL! It gives us great pleasure to welcome the 17-year-old leg-spinner @IamSandeep25 into the #DDSquad! 17-year-old sensation with a knack for picking up wickets, @IamSandeep25 will be vying to do his country proud come the Vivo IPL season!” the club confirmed in an official tweet.

In reply, Sandeep tweeted, “Very happy to be announced as the player of @DelhiDaredevils for this season of @IPL! Special thanks to all those people who kept me in their prayers withholding their nerves! Journey begins now!!”

Excited at the news, Sandeep went on to say that he would take his country to the next level.

“This is the result of my dedication and hard work and I am hoping for the best to do well. I’ll try my best to do well which could open the gates for other players in future,” he added.

His life took a special turn at the age of 14 when the Canadian coach Pubudu Dassanayake picked up Sandeep for the youth team camp.

Further, Sandeep drew a global attention with his entry into the ICC U-19 World Cup squad in 2016 where he bagged five wickets including a hat-trick in a match with Ireland.

Elated at Sandeep’s entry to IPL, Khadka said, “I felt like I have rediscovered myself today. This is awesome and good for Lamichhane and Nepali cricket as a whole. I knew from the very beginning that he would make it big one day.”

Meanwhile, Clarke tweeted, “To the people of Nepal, you should be very proud of @IamSandeep25, he is little champion who wants to do his country proud. Cheer him on and enjoy the journey with him. God bless you.”

“Congratulations to all the Nepalese, the cricket players, the crazy fans and everyone associated with Nepal Cricket. ‪A very proud moment to be a Nepali cricket player today…‪Well done Sandeep Lamichhane,” said Nepal national team skipper Paras Khadka in his official Facebook post.

Former Nepal national cricket team captain and Nepali U-19 cricket team head coach Binod Das tweeted, “Congratulations @IamSandeep25. You have made us proud. Thank u @DelhiDaredevils for the opportunity to this young kid from a tour cricketing nation. #supportdelhidaredevils #ipl2018.”

Sandeep is currently in Dubai tour as part of the Nepal national cricket team’s preparation for the ICC World Cricket League Division-II planned in Namibia in February 2018.