Nepal celebrated the 69th Republic Day of India amid a function at India House in Kathmandu on January 26, 2018.

In a message to the Indian Prime Minister Narendra Modi, Deuba congratulated his Indian counterpart on the 69th Republic Day and expressed willingness towards taking ahead the Indo-Nepal bilateral ties to a much greater level.

Deuba opined that the regular high-level exchanges between the two sides have strengthened the Indo-Nepal diplomatic relations. 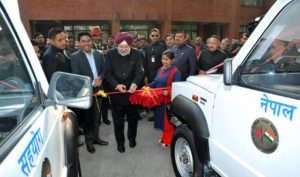 On the occasion, Ambassador Puri presented 30 ambulances and six buses to various charity organizations, hospitals and educational institutions of Nepal.

The official also announced a book grant to 41 Nepali educational institutions and libraries towards ensuring education material to the students in the remote parts of the country.

The Defense wing of the Embassy also unveiled a magazine called Bhu Puu-2017 that speaks about welfare initiatives of the Indian Government for ex-servicemen domiciled in Nepal. 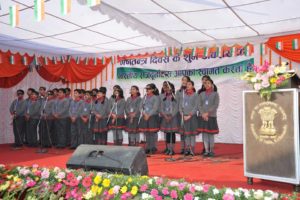 The day also marks the completion of 70 years of Indo-Nepal bilateral relations.

Speaking on the occasion, Puri said the two countries should work on enhancing trade, business and connectivity.

“As a democratic country, India should recognize the achievements made by Nepal,” he added.

A Trip on Political Agenda

With the communist alliance almost ready to form the new Nepal Government, Indian external Affairs Minister Sushma Swaraj is embarking on a bilateral visit to Nepal to discuss political matters.

The visit, planned in the first week of February 2018, marks the first high-level visit of a foreign visitor to Nepal post the conclusion of Nepal’s long-awaited 2017 elections.

“We have sensed that India wants to improve its ties with UML. We need to wait for her message. We don’t know yet what kind of message she will be carrying with her, what priorities Indian wants to set regarding Nepal and what course the relations are desired to take,” says UML leader Pradeep Gyawali referring to the Sushma Swaraj.