England’s 31-run win over India in Match 38 of ICC Cricket World Cup at Edgbaston has made the entire race for the semi-finals interesting.
Cricket
News
Sports
World

England’s 31-run win over India in Match 38 of ICC Cricket World Cup at Edgbaston has made the entire race for the semi-finals interesting.

England stay in contention for a berth in the semi-finals of the 2019 Cricket World Cup after handing India their first defeat of this World Cup.

With this win, England upstaged Pakistan to return to No. 4 in the points table with 10 points in 8 matches.

On Saturday, Australia had crushed New Zealand by 86 runs to remain on top of the ICC World Cup 2019 Points table with 7 wins in 8 matches. 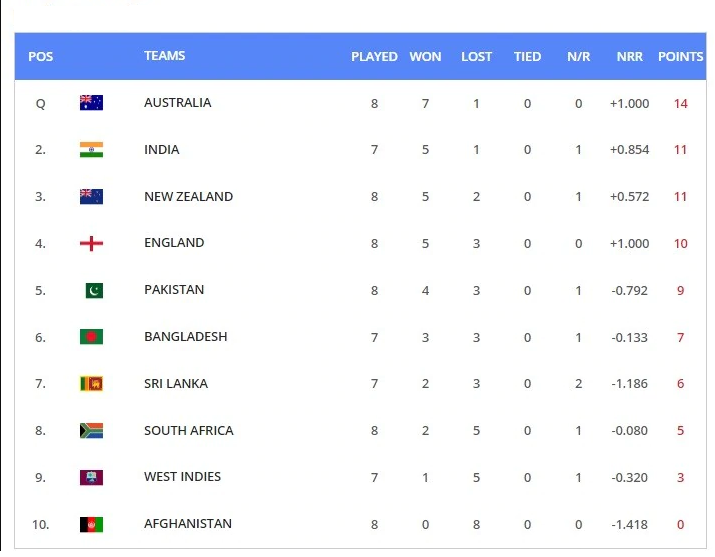 Australia have already qualified to the World Cup 2019 semi-finals whereas New Zealand and India are just one win away from a spot in the knockout stages.

Sri Lanka, Pakistan and Bangladesh are in a must-win situation and can still into the last-four of the competition with a few results going their way.

West Indies, South Africa and Afghanistan have already been knocked after a dismal run of performances in their group matches.

The defending champions’ have already qualified into the semi-finals of World Cup 2019 with seven wins in their 8 matches and only one loss came against India.

India are at the 2nd spot with 11 points from 7 matches. Their chances of making the semi-finals remain bright even after a 31-run defeat to England at Edgbaston.

Virat Kohli’s men just need to win one more from their next 2 matches to qualify. However, if India lose all 3 matches, then they have to depend on net run rate to seal their progress.

New Zealand were crushed by Australia as they faced their successive defeat of the tournament. New Zealand, who are sitting 3rd with 11 points from 8 matches, can get knocked out if they lose to England by a big margin on Wednesday. They need to beat hosts in the must-win clash on July 3.

England have returned into the top-four with 10 points from 8 matches and push Pakistan to the 5th spot. England received a huge boost as now they are just 1 win away from making the last-four stage of World Cup 2019. And if England beat New Zealand in their final match, they will seal their progress.

England’s win over India removed Pakistan from the top four. Now, Men in green will not only have to beat Bangladesh in their final group-stage match on July 5 but also hope that England lose to New Zealand on July 3. Pakistan can get knocked out if England beat New Zealand.