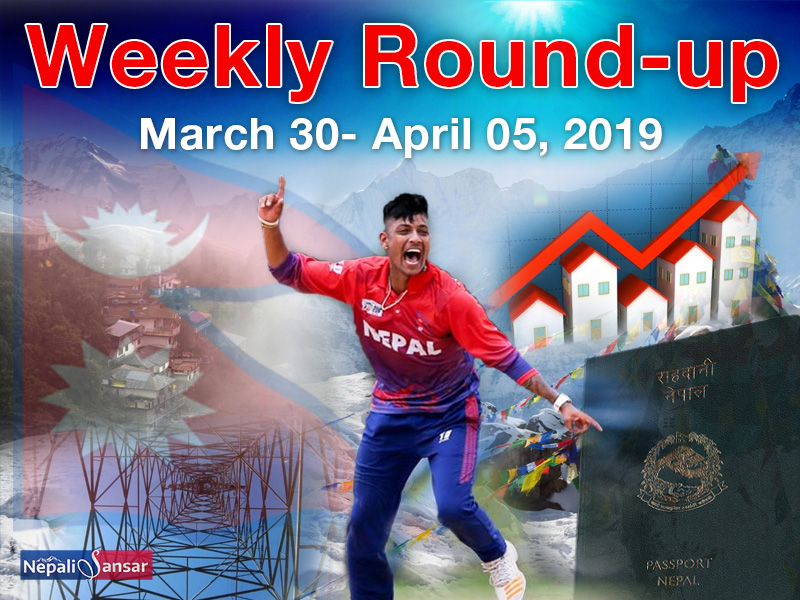 March 30-April 05, 2019 has been an important week for Nepal because of the important updates that the country has been in news for.

Here, Nepali Sansar brings to you a quick snapshot of Top 10 Nepal-related news headlines during the period:

A severe rainstorm has hit Bara and Paras Districts of South Nepal causing both financial and life loss to the region. The sudden disaster once again questioned Nepal’s readiness to tackle disaster concerns…Read More

The culprits behind the Secondary Education Examinations (SEE) question paper leaks in Province 2 were caught. The Central Investigation Bureau (CIB) and Saptari District Police Office presented the accused in front of media at a joint press conference. Surprisingly, the six accused also had two policemen.

3) Docs Call for Halt of Services

The Government Doctors’ Association of Nepal (GODAN) has called for halt of services, except during emergencies, across the country from April 05, 2019. The decision was taken as a protest against the government’s civil service adjustment that has reportedly ignored agreement between doctors and government on key demands.

ADB, in its new Macroeconomic Update on Nepal, made new projections for Nepali economic growth rate for FY 2019 and 2020, while highlighting country’s prospects to grow further and beyond the expectations… Read More

Finally, the Ministry of Home Affairs has stepped up to address the public’s citizenship concerns. In its new decision, the government announced hereditary citizenships for Nepali children with parents of Nepali origin. Read More

The 230-KV Marshyangdi-Kathmandu power transmission line is nearing completion with more than 90 percent of work (to around 33 km) completed, so far. The project has started around two-and-a-half-year ago and is in final stages at the Gandaki, Shahid Lakhan and Gorkha rural municipalities of Gorkha district.

With an aim to enhance its development portfolio, Nepal hosted a two-day Nepal Investment Summit 2019 that saw hundreds of participants including dignitaries, leaders, speakers and other types of participants from Nepal and the world…Read More

Nepal finished flat on the last trading day of the week. The stock index drastically fell down in initial trading, falling by almost 6 points. At the end of the closing session, the benchmark index made a come-back to finish the day 0.64 points lower at 1165.20 points.

In an exciting update for Nepal sports lovers, the country’s spinning sensation Sandeep Lamichhane emerged as the highest wicket-taker in the spin category in T20s in 2019, ahead of other senior cricketers…Read More

In a move controlling the rise of traffic rule violators, the Kathmandu Metropolitan Traffic Police Division has decided to increase the violation penalty up to NPR 10,000. “We have been charging a minimum of Rs500 to maximum Rs1,000 for various traffic rule violations. But people are not taking the traffic rules seriously,” says Senior Superintendent of Police Basant Pant, who is also chief at the Division.