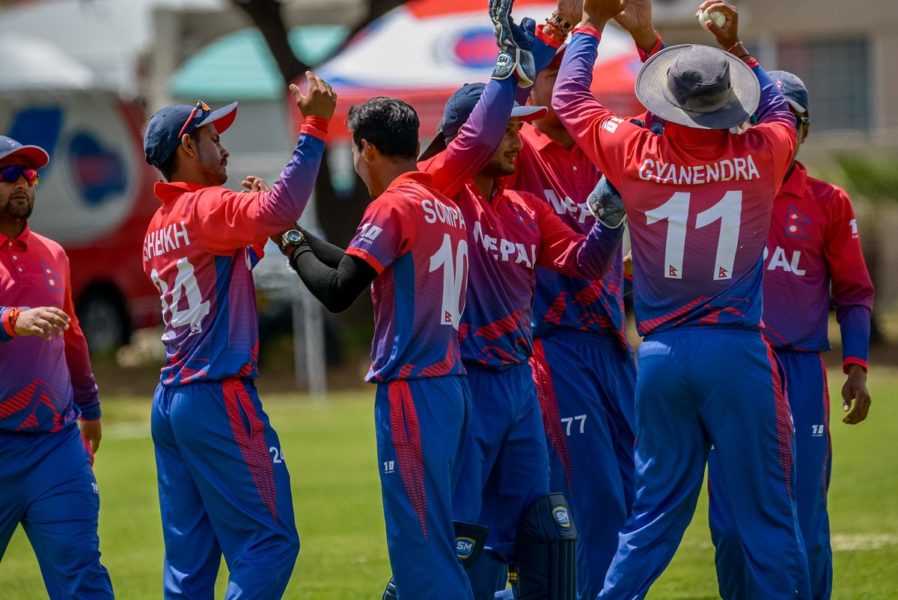 Continuing its success journey in the world cricket, Nepal is back again with an outstanding victory that secured its place in the most-awaited 2019 cricket World Cup Qualifier tournament to be held in Zimbabwe.

The Nepali cricket team registered one of the greatest victories in the country’s cricket history, in a
breathtaking ICC World Cricket League Division-2 match with Canada in Windhoek (Namibia) on February 14, 2018.

Despite a good batting line-up, Nepali team had to face an intense pressure in the last minutes of the match as they had a 51-run target in just 47 balls.

Here is where the team fought back!

At 144-9 score with the last 7.5 overs remaining, Nepal had almost thought of losing it out.

But, Karan’s entry made a difference!

With a striking and unbeatable performance, Karan hit four sixers in scoring 42 runs in just 31 balls, thus driving the team to success at the nick of the moment.

Karan was named ‘Man of the Match’.

Canadian team, which saw three straight wins in the tournament, was short of a single victory either over Namibia or Nepal for gaining an entry to the World Cup Qualifier tournament, and has finally lost it out.

Now, Nepal and UAE have secured their place for the 2019 World Cup Qualifiers tournament.

While Nepal is to face Papua New Guinea, Ireland, the Netherlands and two-time World Cup winner West Indies in the Group B qualifier round, the UAE will be facing Zimbabwe, Afghanistan, Scotland and Hong Kong in the
Group A qualifier.

“I can’t speak, the last wicket made 50 odd runs, cricket is just a winner today. I feel for Canada, one in a million times you would win those games. Things have just worked out for us, we have been working so hard for all these years and eventually it has happened for us, I am speechless,” said Nepali captain Paras Khadka, elated at the winning performance of his team.

Expressing satisfaction over Nepal’s first-ever entry to World Cup cricket, Khadka said, “The fans back home are one of our biggest inspirations and we always thank them. We want to do well, and help Nepal cricket grow.”