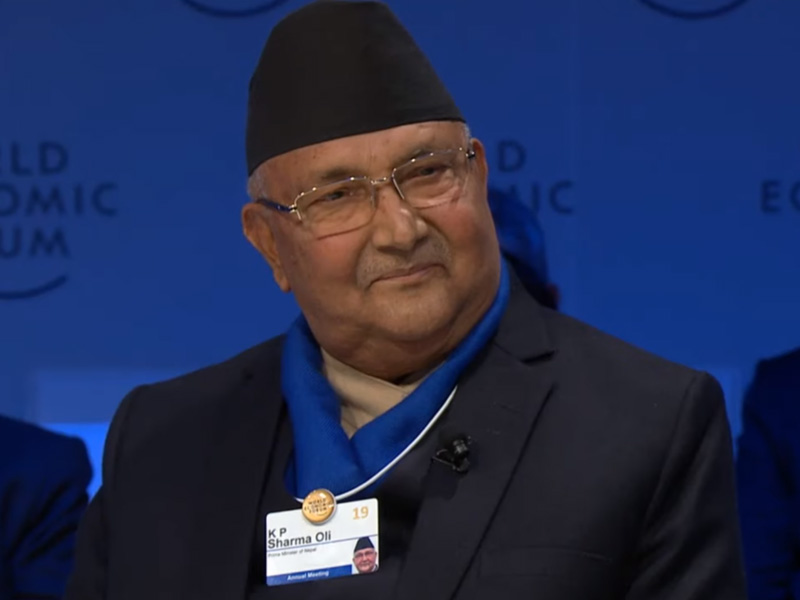 The Prime Minister stated this at a panel discussion session titled ‘Strategic Outlook on South Asia’ on January 22, 2019, held as part of the WEF Davos Conference 2019.

Addressing the panel, Oli said the Nepal Government considers introduction of social justice as the top priority along with society development and environmental safety.

“Nepal has now entered a new era where it sees optimism in increasing its role in the regional and international cooperation and development,” Oli told the panel.

On the occasion, Oli called on the international community to tap the potential resource base of the country through proper investment.

“We are trying to invite investment and new technology and introduce digital connectivity for enhanced regional cooperation,” Oli added.

Explaining the panel about Nepal’s political scenario, the Prime Minister said the country could successfully overcome its political instability and is now moving ahead with clear policies and visionary leadership.

With this positive scenario in place, the country can achieve a faster growth rate within a short period.

“Nepal’s policies are favorable to private businesses. We are doing homework to lure the outgoing Nepali workers back to the country through incentives and job opportunities,” says Oli.

‘South Asia and Beyond’

Speaking about South Asia, Oli said the time has come for strong regional cooperation and trade.

Citing the BIMSTEC Summit 2018, he reiterated about Nepal’s connectivity and level of association with the South Asian nations.

“Nepal is not only connected with South Asia but also to Thailand, Myanmar among other ASEAN countries. We are going to open waterways, roads, airways with neighboring countries which will help in developing regional cooperation and trade,” said the Prime Minister.

Highlighting Nepal’s neighborhood with the two Asian giants India and China, Oli said Nepal can expand its connectivity with world nations with the help of its two close neighbors.

“Arrangements to this end has been put in place as Nepal has signed connectivity agreements with China and India. We are bringing railways from India and China to Kathmandu,” Oli added.

Sigve Brekke, president and chief executive of Telenor Group and ex-RBI Governor Raghuram Rajan were among key panelists of the session.

The Oli-led Nepali delegation also had Foreign Minister Gyawali on the occasion.

Nepal’s Next in Davos Conference 2019

Oli also addressed an informal gathering of world economic leaders on the theme ‘The End of Global Trade as We Know It?’ later in the day after the panel discussion.

Next, in the schedule, Oli will address another panel discussion on ‘Shaping the Future of Democracy’ on January 22, 2019.

The Prime Minister is also scheduled to hold separate discussions with business leaders and heads of the states as part of the #DavosConference2019.