The Himalayan nation is a confluence of two of the world’s greatest religions – Hinduism and Buddhism.
Culture
News
Special Stories
Tourism

The abode of the creator and the land for some of the most holiest apparitions, Nepal is historically known for being a spiritually-rooted nation owing to its rich religious history.

The Himalayan nation is a confluence of two of the world’s greatest religions – Hinduism and Buddhism.

These religions paved way for the multitude of temples, stupas, durbars and monasteries that make up the topography of the land of the Gurkhas and are also UNESCO World Heritage Sites.

Most of Nepal’s pilgrimage sites draw throngs of people from across the globe, often cramping religious places on festivals such Dashain, Janmashtami, Shivaratri, Tihar and more.

The Hindu pilgrimage sites can be divided into four sections or Char Dams – Pashupat Kshetra, Mukti Kshetra, Ruru Kshetra and Baraha Kshetra, positioned in the different directions of the country, ranging from east to west and north to south.

Also, there are Vaishnav, Shaiva and Shakti shrines as per the devotees’ faith in Vishnu, Shiva and Kali.

In terms of Buddhism, Lumbini – the birthplace of Buddha stands as the most holiest site for the Buddhists in Nepal and around the world.

Interestingly, there are many temples, shrines and monasteries, which are significant to both Hindus and Buddhists.

The temple of Muktinath in Mustang is dedicated to Lord Vishnu and Avalokiteshwar, equally revered by Hindus and Buddhists.

Besides, there are several monasteries and caves where the holy Guru Rinpoche or Padmasambhava is believed to have meditated.

While there is an endless list of temples, shrines, monasteries and more, here is a select few! 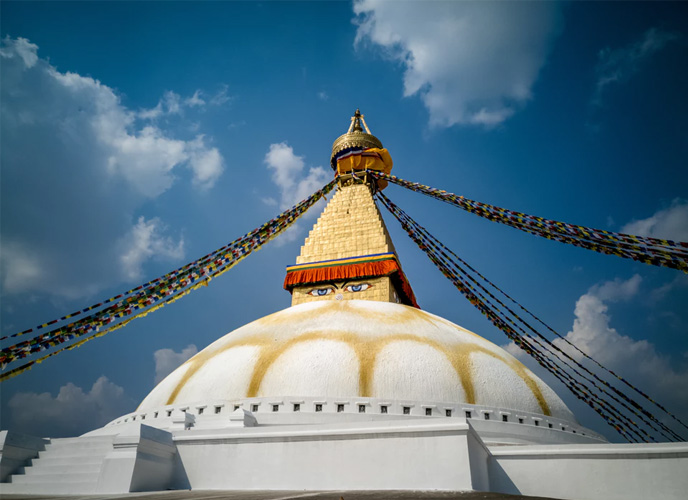 The 36-m high structure is one of the largest stupas in South Asia. It is located 8kms from Kathmandu and is visible right from the Tribhuvan airport. It was constructed in the 14th century and is believed to have been created soon after Buddha passed away. The stupa’s massive mandala also makes it one of the largest spherical stupas in Nepal. Read more.. 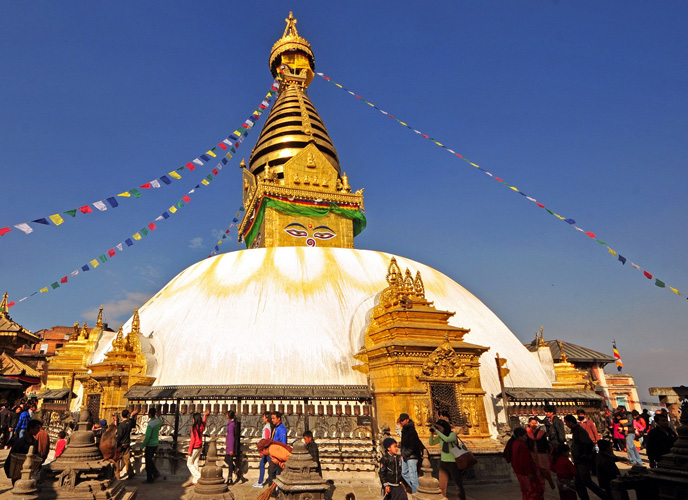 Famous as the ‘Monkey Temple’ among visitors, the stupa is situated in the northwest region of Kathmandu Valley. The stupa presents a captivating view of the city as it overlooks most part of the valley. The site stands as a symbol of faith and harmony. It is believed to have evolved automatically when the valley was bought to life from a large lake more than 2,000 years ago. Swayambhu means self-existent one. Read More 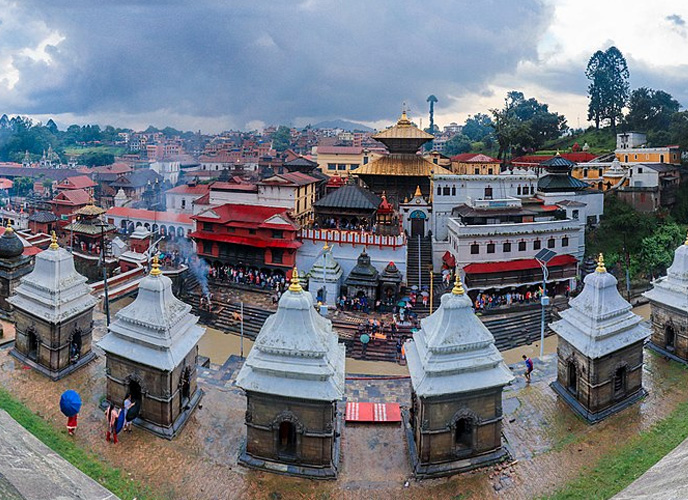 The most holiest shrine for Hindus in Nepal and India is located on the banks of Bagmati River on the outskirts of Kathmandu. It is spread across an area of 246 hectares and is filled with temples and monuments. It features a variety of styles temples such as dome style, pagoda and Srikhara style. The shrine houses several temples including Bhuwaneshwori, Dakshinamurti, Panchdewal, Tamreshwor and more. The temple receives thousands of festivals on the occasion of Shivaratri. Read More 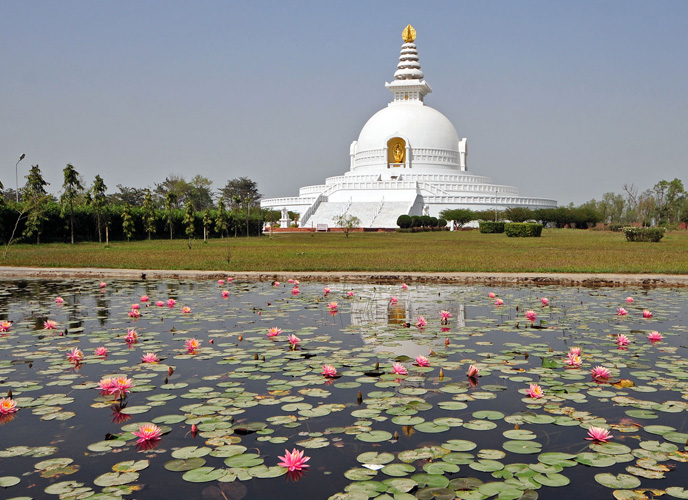 The Buddhist pilgrimage site is of high importance to Buddhists as it is considered as the birthplace of Buddha. The enlightened soul was born at the very spot in 623 B.C. The site is located in the Terai plains of southern Nepal and has the commemorative pillars erected by the Mauryan Emperor Asoka in 249 B.C. Mayadevi temple is one of the most important sites in the Lumbini garden. Read More 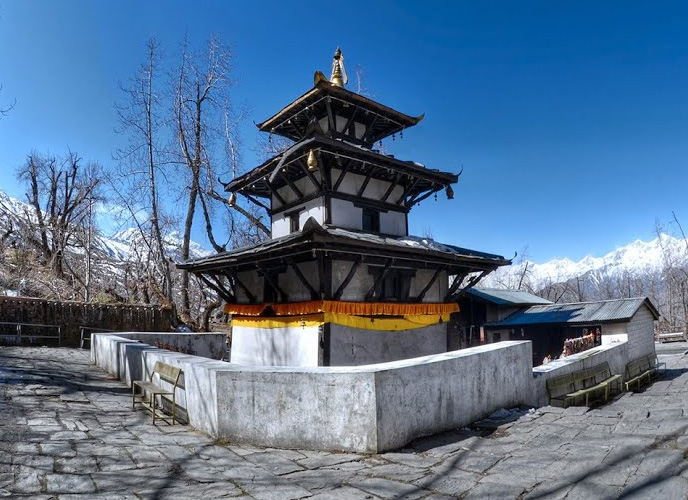 Follow the trail through Jomsom and arrive at Muktinath, a religious site that is of high significance to both Hindus and Buddhists. For Hindus, this a place of salvation where bathing in the water guarantees salvation after death. It is believed that the Lord Brahma himself lit the eternal flames that burn at the temple. Buddhists believe that this is the place where the holy sage Guru Rinpoche came to meditate. For Tibetan Buddhists, this place is one of the 24 tantric places, which houses the statue of Avalokiteshwara, the deity who embodies the compassion of all the Buddhas. Read More 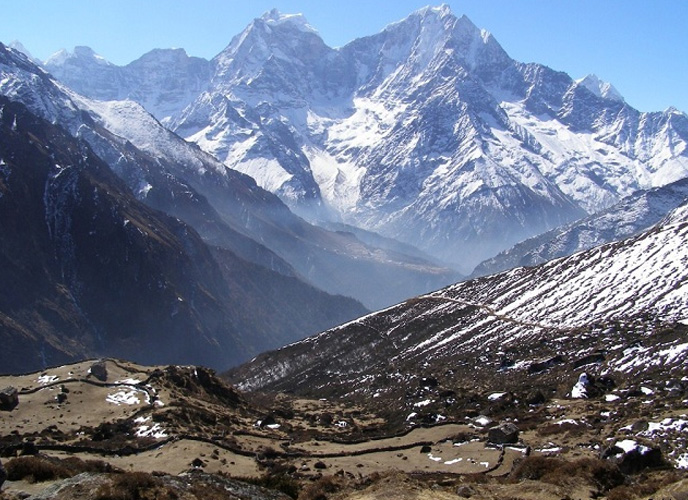 The Tengboche monastery is situated in the Khumbu subregion of Nepal’s Province 1 and is considered as the largest gompa in the region. It houses a residing holy monk or Ringpoche who bless pilgrims and visitors to the area. The Buddhist monastery presents a picturesque view of the Himalayan mountains, which includes some important peaks such as Ama Dablam, Everest, Lhotse and Tawache among others. An interesting fact about Tengboche monastery is Tenzing Norgay, the first man to reach the summit of Everest was once sent to the very monastery to become a monk. 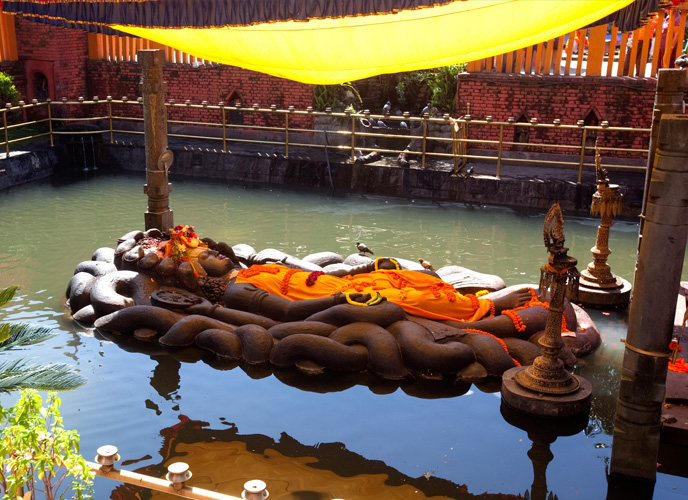 The Budhanilkantha is one of the most-loved Vishnu temples of the Kathmandu Valley and is situated at the foot of the Shivpuri Hills. The temple presents an intricately-designed sculpture of the sleeping Vishnu, who looks similar to the Buddha. The stone statue of Lord Vishnu is the largest Vishnu statue in Nepal and is seen lying on a bed of Nagas in the center of a small pond.

Nepal’s topography exudes as sense of calm and peace that not only comes from the rich vegetation and landscape but also from the spirituality of its temples, monasteries and shrines. Read More

Wanting to make a religious pilgrimage? Then what better place than the abode of the Himalayas?