Swayambhunath is perhaps the best place to observe religious harmony in entire Nepal and must not be missed on a trip to Kathmandu.
Tourism

Swayambhunath Stupa is one of the most ancient and holy shrines in the Kathmandu valley and has been an important Buddhist pilgrimage destination since 5th century AD.

According to the 15th century Swayambhu purana, Lord Buddha planted a miraculous lotus that radiated a brilliant light and blossomed in the lake that once covered the Kathmandu Valley. This lotus later transformed into a sacred hill on its own and the place came to be known as Swayambhu, meaning ‘Self-Created’ or ‘Self-Existent’.

Swayambhunath is regularly visited by thousands of pilgrims including Vajrayana Buddhists of northern Nepal and Tibet, Newari Buddhists of central and southern Nepal, and even people of other faiths.

A designated UNESCO World Heritage Site, Swayambhunath is also fondly known as the ‘Monkey Temple’ on account of hundreds of monkeys that abound the hill.

At short distances from Swayambhunath are other historical temples such as the Shiva Jyotirlinga temple of Pashupatinath, Boudhanath Stupa, Changu Narayan, Dakshinkali and Budhanilkantha. 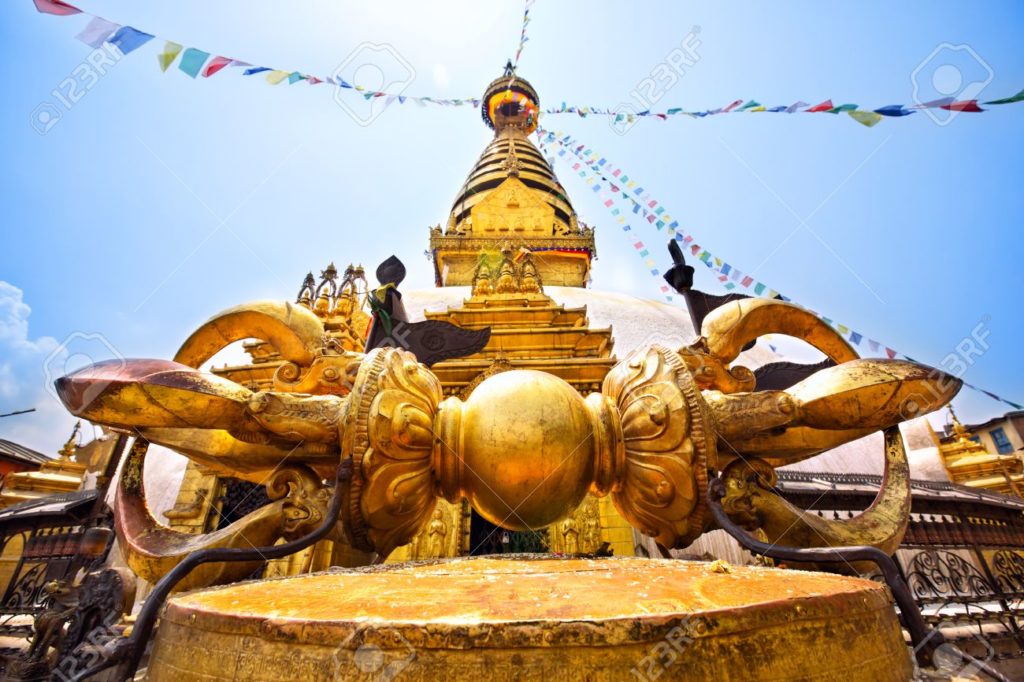 Swayambhunath houses the famous six meter high image of Shakyamuni, the oldest persona of Lord Buddha. Evening prayers are held every day around this statue along with the chanting of Sanskrit sutras.

The two main festivals celebrated at Swayambhunath are Buddha Jayanti and Losar. During these occasions, many pilgrims circumambulate the temple while the monks create a lotus pattern on the stupa with saffron-colored paint. The month-long Gunla celebration marking the end of the rainy season is another important event in Swayambhunath.

Swayambhunath is a mosaic of small stupas, pagoda temples and monasteries, and presents a magnificent view of the Kathmandu valley. Centuries-old statues, thousands of butter lamps, carved icons and the fragrance of incense sticks create a magical atmosphere at this ancient religious shrine.

Some of the prominent monuments in Swayambhunath include the Buddha statue on the western side, the huge gold-plated Vajra ‘thunderbolt’ in the east, statue of the sleeping Buddha, the Dewa Dharma monastery, noted for a bronze icon of Buddha and traditional Tibetan paintings, and the temple dedicated to Harati, the goddess of children.

Swayambhunath is perhaps the best place to observe religious harmony in entire  Nepal  and must not be missed on a trip to Kathmandu.