The match began with Oman winning the toss and electing to field first.
Cricket
News

The match between Oman and Nepal turned out to be a disappointment for Nepali fans.

Nepal lost the match by 6 wickets and scored a total of just 64 runs.

Oman presented a tough match for the Nepal team, which struggled to maintain ground against the former’s attack.

The match began with Oman winning the toss and electing to field first.

Nepal’s batting line-up began with Ishan Pandey and skipper Paras Khadka who failed to make it past 7 runs from 10 deliveries, collectively. 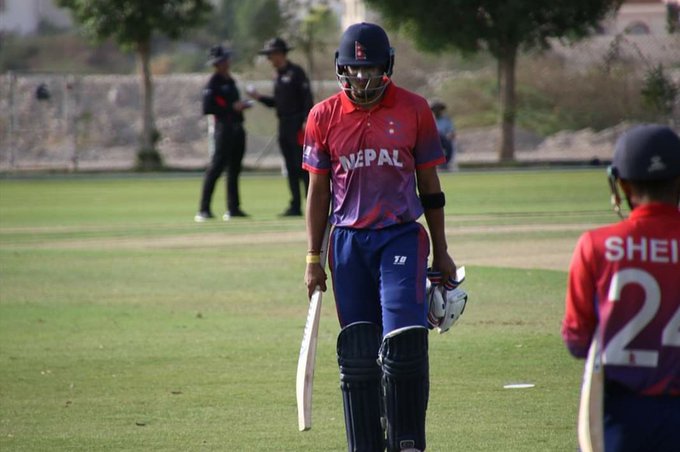 Then came Aarif Sheikh who was the only batsman to score 20 runs from 13 deliveries. This was followed by DS Airee’s 11 runs from 6 deliveries.

The remaining players fell prey to Oman’s fierce bowling and could hardly score any runs for their team.

When it was Oman’s turn to bat, Khawar Ali and Aqib Ilyas opened the account for the team. With Nepal strengthening its attack against Oman batsmen, the first two players were limited to a mere 9 runs from 20 deliveries.

Going forward, Aamir Kaleem scored 8 runs from 10 deliveries and was bowled out by Karan KC in the third over.

Similarly, Naseem Khushi failed to stand a chance against Nepal bowler Karan KC who bowled him out in the seventh over.

Oman’s Suraj Kumar remain unbeaten until the end of the game. He scored a massive 42 runs from 30 deliveries and contributed majorly to the team’s victory.

Even though Nepal couldn’t win the Oman Pentangular T20I series, it put up a good fight in the final game and proved its ability as a team.

Keep up the spirit Team Nepal. Better luck next time.

Stay tuned to find out who wins!