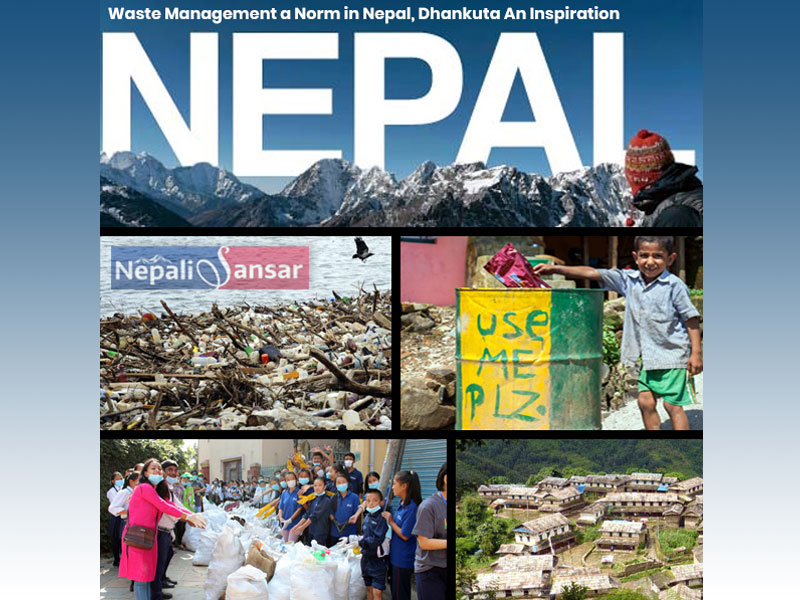 Growing industrial activity, rampant usage of packing materials and usual dumping of waste from households and other places contributed to land pollution across the globe and eventually added to the world’s major concern of global warming.

This eventually created a dire need for waste management, globally, and resulted in high demand for various waste management techniques to recycle the waste into different useful forms.

This is the trend we have been observing over the years across municipalities, corporations, cities, among others.

While some countries have already come up with innovative waste management solutions, some are underway in their efforts, and some have just begun.

As a country with huge natural resource base, waste management and eco-friendly solutions mean a lot for Nepal.

Towards this end, Nepal has been undertaking various measures to tackle waste management to ensure a clean country for its citizens, and has also witnessed revenue generation across sectors from such initiatives.

Let’s take a deep dive into such instances that contributed to Tidy Nepal!

Clean-up Campaigns for a Cause

When it comes to Nepal, the country’s capital Kathmandu is most spoken about in terms of pollution and congestion.

“Foreigners and also Nepalis living abroad are reluctant to come to Kathmandu as the city has become overly polluted. Anyone can fall sick if exposed to the dusty environment here just for a few days. The metropolis and the government should immediately come forward to resolve the issue of air pollution,” says Nepal’s renowned cardiac surgeon Dr Bhagwan Koirala.

Over the years, authorities and public have been working hand-in-hand to address the pollution and waste concerns in the Kathmandu Valley.

Here are some of the recent campaigns undertaken in Nepal:

Interestingly, people from all of walks of life including general public, Nepal Army, Nepal Police and various other government departments took part in the clean-up drives that have been underway since more than four years.

“We have gathered here voluntarily to mount pressure on the government. While the government does something to deal with air pollution, we should not forget our responsibility towards keeping environment safe and clean,” said campaign coordinator Dipak Raj Sapkota speaking on the sidelines of the ‘Swachchha Hawa’ campaign. 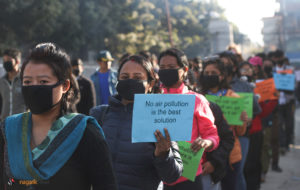 Nepali Environmentalist Bhushan Tuladhar says, “Such initiative has yielded positive results in the past. Nearly 15 years ago, when the public in Bhaktapur and Lalitpur rallied demanding action for controlling air pollution, the local authorities took certain measures which helped bring the air pollution levels down by up to 26 percent. We are demanding nothing but clean air to breathe.”

Our Waste Our Responsibility: Clean Up Nepal and Australian Embassy in Nepal jointly organized a nation-wide campaign across 31 districts of the country with the participation of around 24,000 Nepalis.

The campaign run under the slogan ‘our waste, our responsibility’ saw all sections of Nepali society including individuals belonging to different areas, communities and organizations, was aimed at cleaning of rivers, lakes, streets and public places.

Football for Garbage: Khotang’s Rupakot Majhuwagadhi Municipality Ward No 11 has come up with an innovative idea as part of its sanitation campaign. The Ward officials announced a football for the garbage collectors for every five kilogram of garbage collected, which drew huge attention among the local youth. “Football for garbage campaign will continue till the ward gets rid of all old garbage,” says the Ward Chairperson Ramchandra Rai. 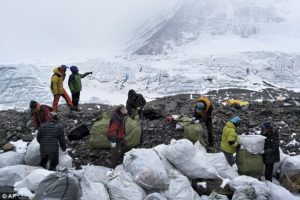 Leaving no stone unturned, mountaineering expedition organizers had also called for a campaign to clean-up the garbage on Mount Everest in March 2017.

As part of this activity, the organizers sent garbage-collection bags along with climbers to collect the trash on Mount Everest, which was collected back to the base camp through helicopters. Hundreds of climbers and their associated guides expressed their willingness for this expedition.

According to the World Bank 2015 report, Nepal’s cities account to 7 lakh tons of waste annually, of which, 50 percent is collected and the remaining left as dumps.

Though the solid waste management can hold 50 percent of a municipality’s annual budget, most of them are hardly seeing any revenues through such services.

Hold on! Dhankuta is an exception! 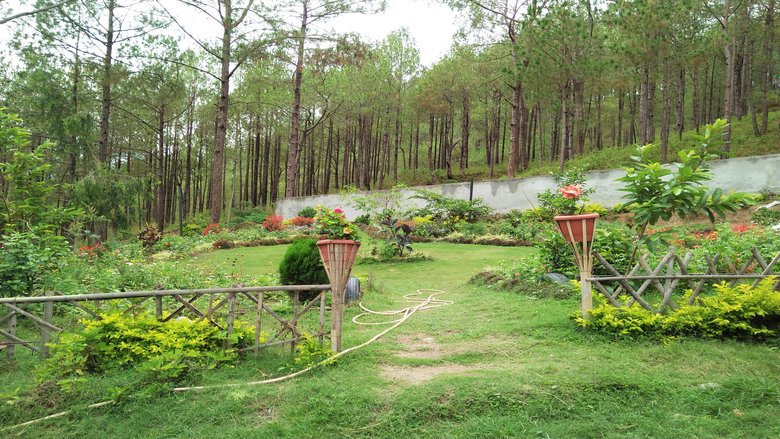 Dhankuta garnered the award in the annual contest put forth by the Government of Nepal’s Solid Waste Management Technical Support Center (SWMTC).

“We were not so particular about cleanliness up until about a decade ago. Like so many towns in the country, residents littered plastic everywhere. It choked our drains and was such an eye-sore,” says Lal Chandra Gongba Tamang, former President of the Dhankuta chapter of Federation of Nepalese Chamber of Commerce and Industries (FNCCI).

That was in 2009, the locals of Dhankuta felt the need to get away with the concerns the municipality is facing with the disposal of waste. Eventually, the locals installed a landfill in Salleri at across a large area of 30 ropanis at Rs 40 million budget.

This landfill assures the municipality handling of 10 tons of waste per day for around 25 years. Moving ahead with this encouragement, Dhankuta finally became ‘plastic-free’.

The municipality today has an efficient waste management system involving 16 sanitation workers focused on ensuring cleanliness across all wards of the municipality on a regular basis, among others.

The locals have gone ahead implementing effective recycling methodologies, wherein, households are well-trained in segregating biodegradable and non-biodegradable waste, and usually reutilize biodegradables as manure or cattle feed. This can eventually cut-down the waste produced in the municipality easing the landfill load.

You might also have come across such inspiring stories that inspired millions. So, what are you waiting for? Nepali Sansar welcomes yours contribution for such stunning stories. Come on, Contribute and Collaborate! at newsbureau@nepalisansar.com