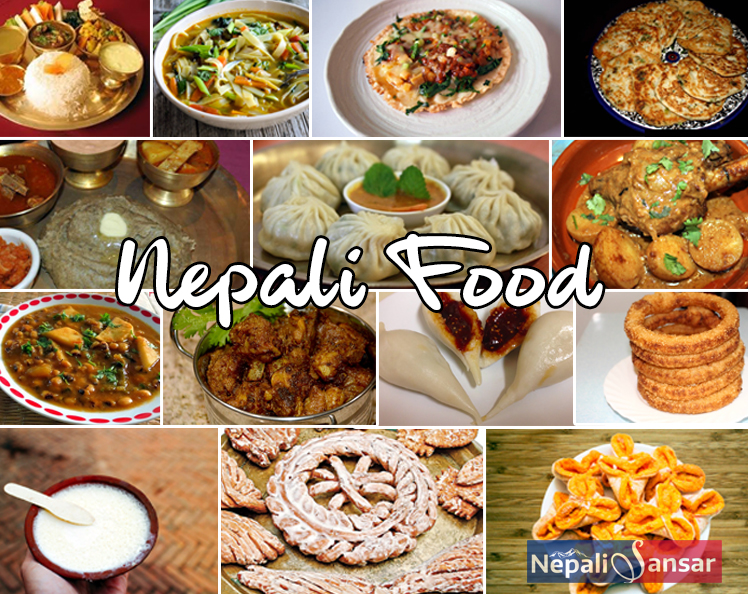 Food in a way represents a nation’s ethnicity. It is one of those distinct elements that tell a nation apart from another, among other elements like clothing, languages, tradition, etc.

Nepal is a beautiful nation with values and cultural traditions retained despite the transition from the medieval to modern times, so is the case with its food!

Ranging from colorful sweets to some mouth-watering delicacies, Nepal has everything to entice the travel and food lover and especially, the health conscious. Compared with the other South Asian countries, Nepal follows a healthy diet that includes chunky vegetables, lean meats, pickled ingredients and salads.

While we cannot number the food varieties that the states of Nepal collectively produce, we bring to the plate some of the most exciting food from Nepal. 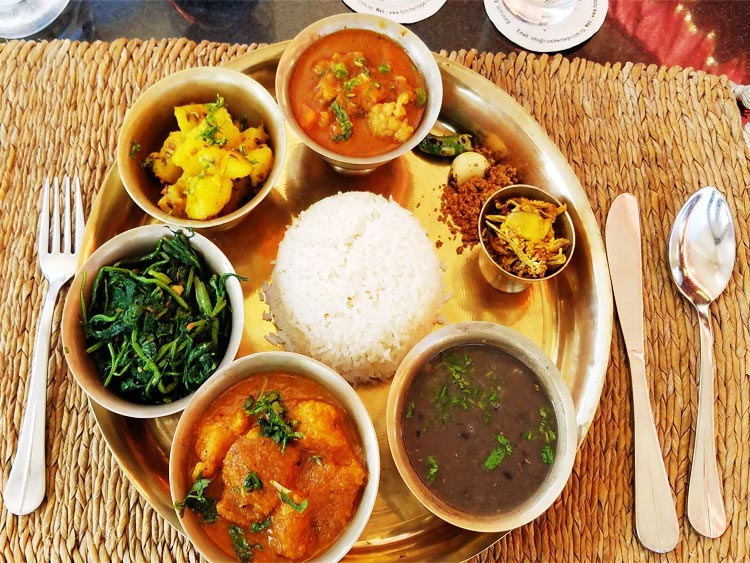 This traditional dish originally from Bengal is a combination of rice and lentils. The Bhat (rice or other substitutes like cornmeal and barley) is placed in the center and is accompanied by the dal (lentils soup) and with various other side dishes like salads, tarkari (vegetable) curries (meat, fish or chicken), yogurt and chutney. This dish represents the simplicity and humility of the people of Nepal

With its origin credited to the eastern part of Tibet, Thukpa is a hot noodle soup. This warm dish consists of meat and boiled vegetables with noodles (known as Thukpa in Tibetan). The meat stock adds a wonderful aroma to the dish. The varieties of meat that can be added to the Thukpa include yak, goat, chicken and lamb.While the dish is famous in Nepal and Tibet, the former’s version appeals to the people with its extra hint of spice. Kathmandu and other mountain regions are home to this warm dish in Nepal. This dish speaks of the warmth of the Nepalis towards visitors. 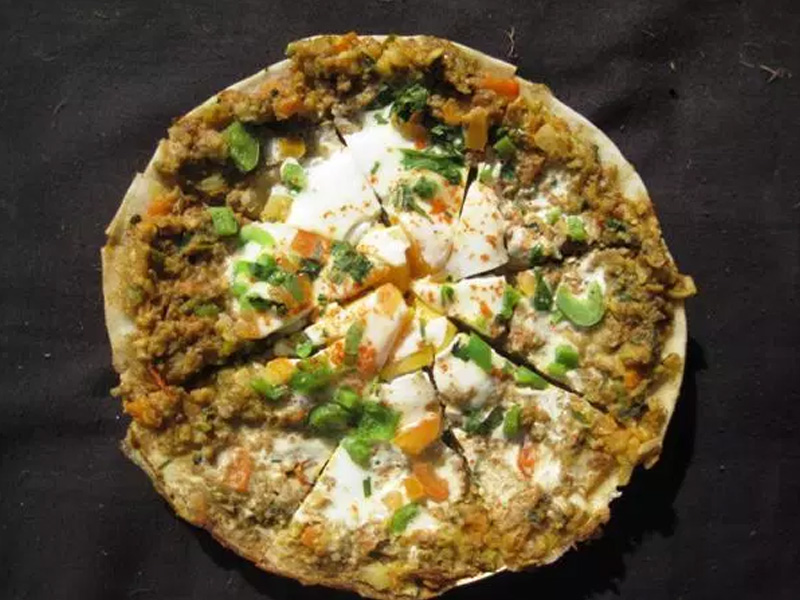 A snack that was introduced by the Newars, the Chatamari or Keema Chatamari is a dish that is made using rice flour. Converted into a flatbread, the base is then cooked over heat. The topping usually includes minced meat or egg and some vegetables including tomato, onions and green chilly. This snack reminds us of the cultural co-existence of the people of Nepal. 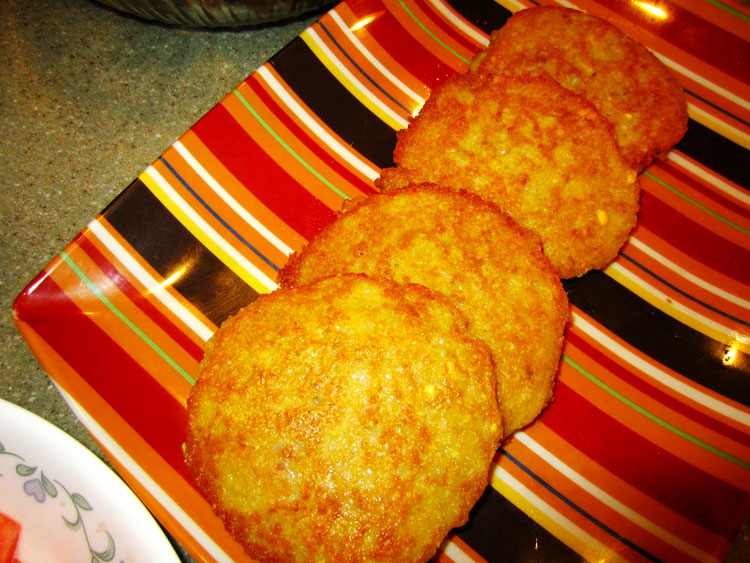 This street food is found at the corners of Kathmandu streets. The dish is made with dark lentils that are soaked overnight and made into a paste. This paste is then mixed with masala (spices) and shaped into small flat circles. These circles are fried in mustard oil. Towards the end of the preparation, an egg is broken on it and minced meat is sprinkled.

A sugar-free dish, Dheedo is made of wheat or maize. Rich in nutrients, this delicacy is served with Gundruk soup that is made of dried Gundruk and fermented green leafy vegetables. Usually made as a soup, the Nepalis add beans and potatoes. It has a tangy taste to it and makes for a very good side-dish with Dheedo. The dish is also known as the ‘National food of Nepal’. 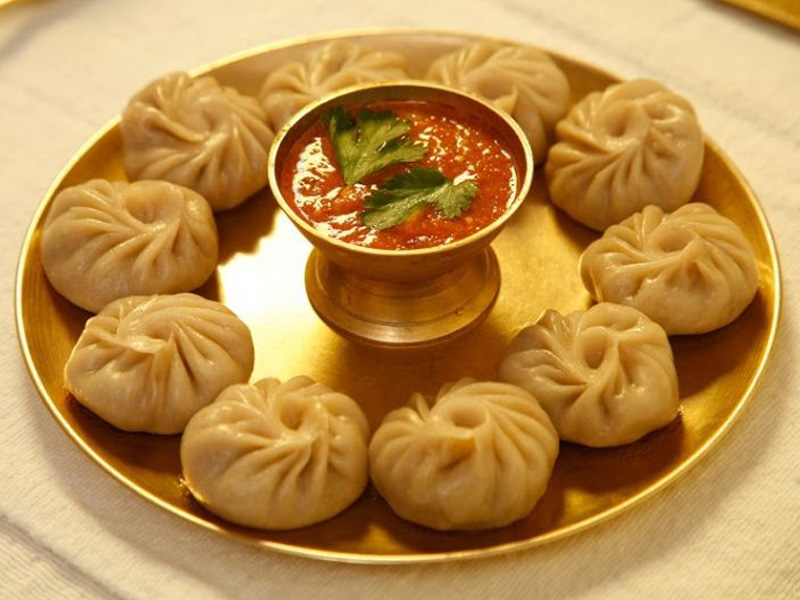 Nepal’s dumplings are now a favorite snack in India and Bhutan. The momo is believed to have originated in Tibet and is similar to the Gyozo in Japan. The momo is a steamed bun that contains steamed vegetables and meat. The snack is served with several dips. More often with tomato sauce and fermented vegetables.And with new improvisations being made to the dish, the momos are filled with cheese and even mashed potato. These dumplings can be steamed, fried or boiled. 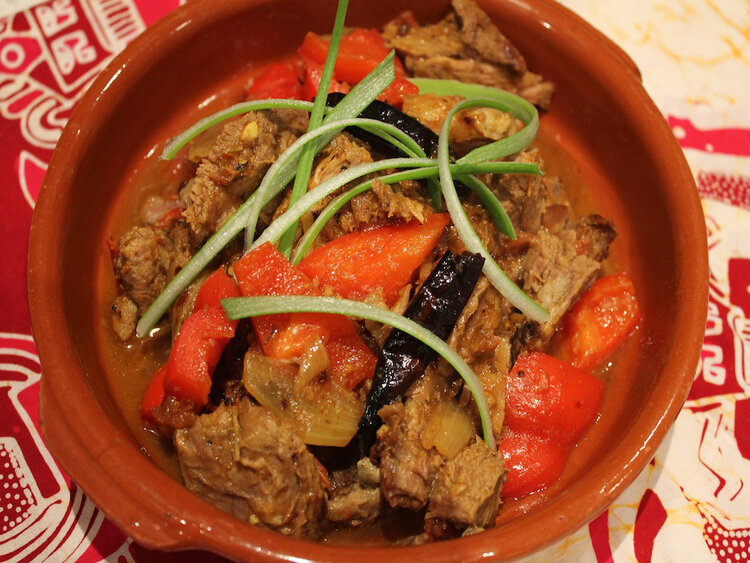 More of a dish prepared in winter, Gorkhali lamb is a rich and filling curry item that is popular in Nepal. The chunky lamb pieces are slow-cooked alongside potatoes and chopped onions. This method of cooking brings out the rich flavors of the ingredients and renders an appetizing aroma. Sometimes, the meat is grilled and marinated with a chilly mixture before being added to the gravy. This is done to add more flavor the dish. The Gorkhali lamb tastes best when teamed with rice or roti (chapathi/flatbread). 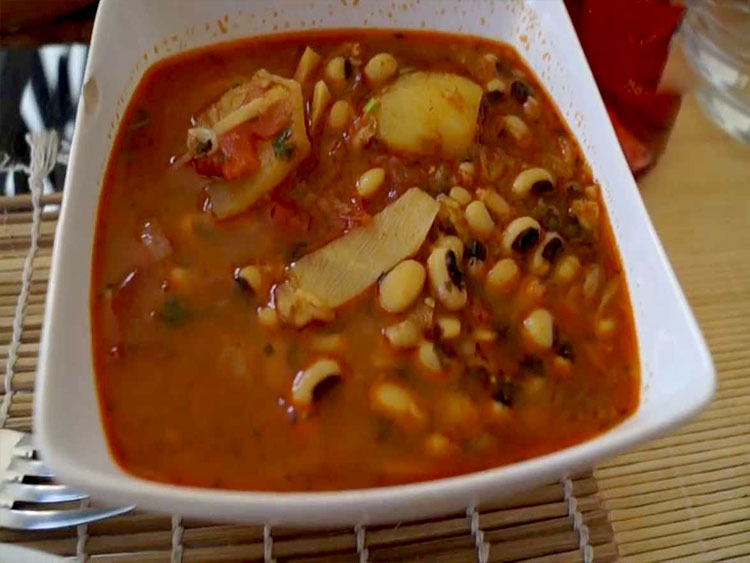 A unique curry that is famous in Nepal is the aloo (potato) tamma (bamboo shoots). The dish has a tangy taste to it and has a variety of ingredients added to it. Beans and buffalo meat can be additionally added to give the curry that extra punch. The Aloo Tamma is a contribution of the Newars to Nepal’s food culture. 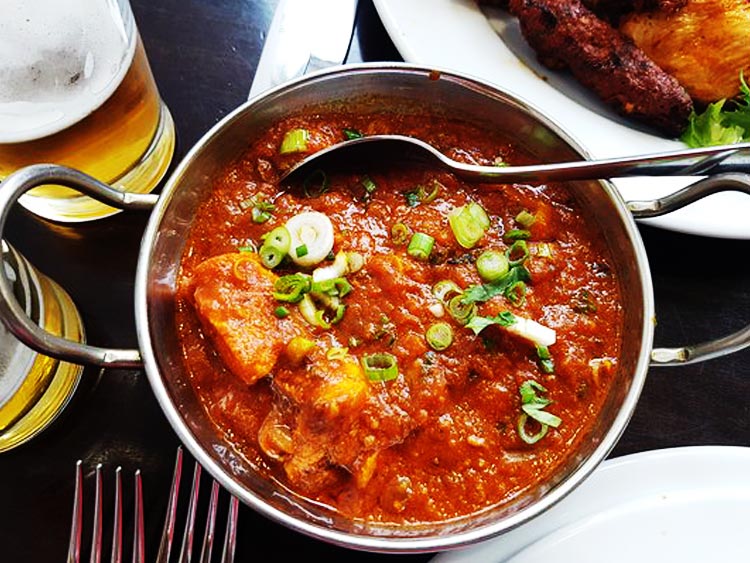 Also known as Chicken Tarkari, this dish is made using typical ingredients like garlic, ginger, cilantro and turmeric. Additionally, there is an ingredient called Timur (Nepalese pepper) that adds extra spice to the gravy, especially because the dish uses yogurt. Curd is known to reduce spice in any dish. The dish can be eaten with plain rice.

Since no meal is complete without a dessert or sweet, we present to you a few of Nepal’s best sweets and desserts. 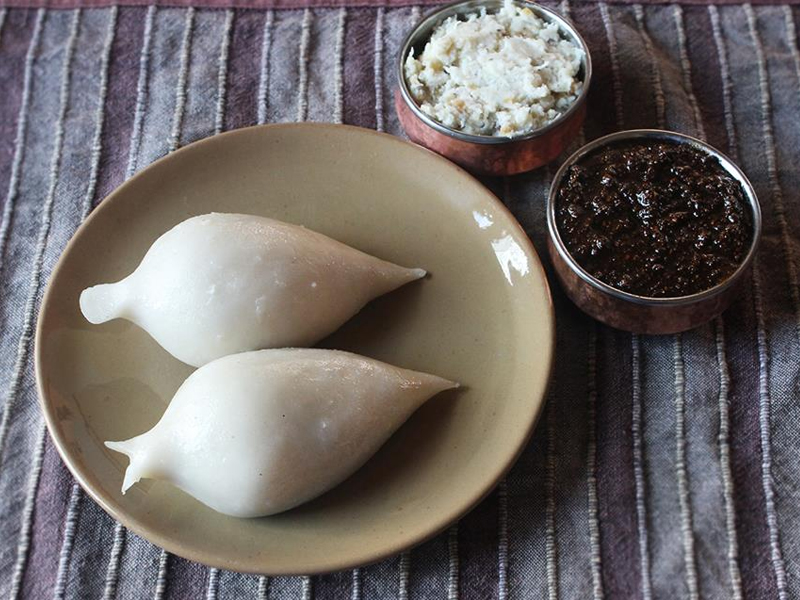 Shaped like a fish, these treats are popular in Nepal and are a popular during Yomari Punhi, the post-harvest celebration. Made of rice flour, these dumplings are steamed and contain a sweet filling called Chaku. With recent experimentation, chocolate is also being used. They are served with a sweet dip.

With resemblance close to a doughnut or bagel, the sel roti is a crispy sweet. Made of rice flour, the snack is initially deep fried and then made into a circular shape. While it crisp on the outside, the dough is fluffy and soft on the inside. It makes for a perfect snack when served with curd or with vegetables. This sweet is eaten mostly around Tihar and Dashain celebrations. 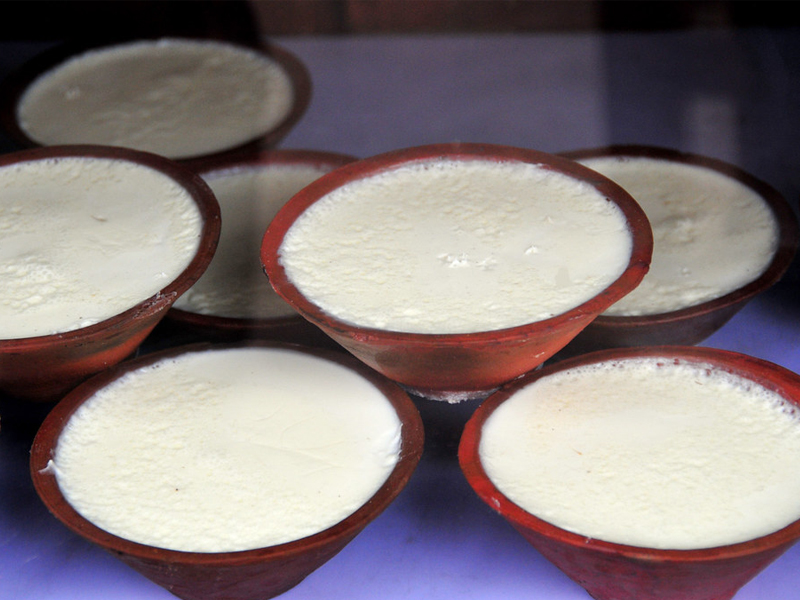 Famous in Bhaktapur, Juju Dhau (King of Curd) is a name synonymous with every store in the city. This dish is made of buffalo milk and is a curd variety that is highlighted by vanilla lumps. The preparation method involves boiling buffalo milk that has honey added to it. This mixture is then poured into a clay pot. The pot is wrapped in cotton cloth and is left in a warm place, until the curd is set. 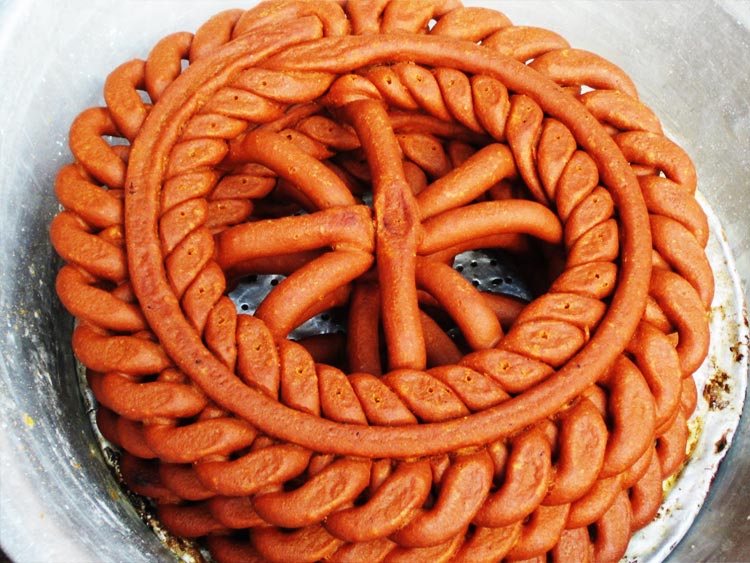 Introduced to Nepal by the Newar community, Laakhamari is prepared during special ceremonies or occasions. The bread looks like a wreath and is prepared using rice, wheat flour and black gram lentils. The ingredients used, and the method of preparation has its roots in ancient times. This recipe has been brought down through generations. It is mostly prepared during wedding ceremonies. Before a wedding, the boy’s family sends this sweet along with other fruits and sweets to the girl’s family as a sign of approval for the upcoming marriage. 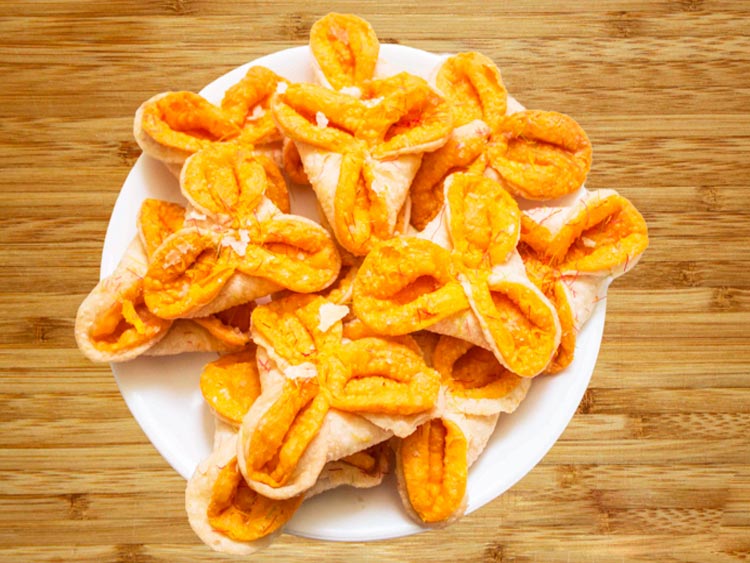 This sweet resembles a flower and is made during Dashain, Tihar-Bhai-Tika and other religious celebrations and ceremonies.

Every country follows certain etiquette while they eat and serve meals. Nepal very religiously follows all its food practices and has a set of rules that visitors need to learn if they want to make the Most of their trip to Nepal and get a taste of its food culture. Here are some tips:

Savor the Taste of Nepal

Let your taste buds keep tingling with a taste of good food from the land of high mountains. Like always, Nepal waits to be explored. Hoping that you’ll take some good ‘food memories’ back home.