Gurkhas of Nepal – Fierceness At its Best! 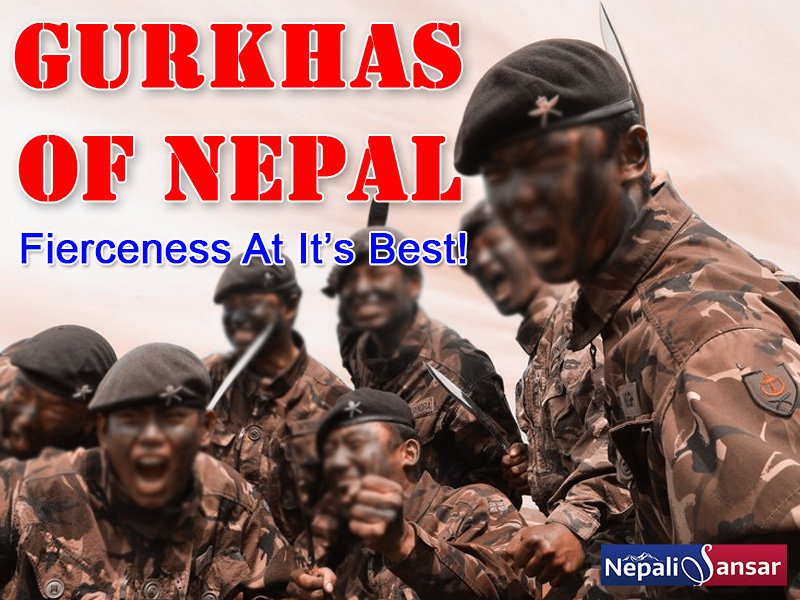 Nepal might be a small country lying in a landlocked region separated from the world, but it’s also the ‘savior’ to the many nations!

Yes, we mean it! Despite its size, the country is undoubtedly the ‘savior’ for many world nations because of its unstoppable fighters, the almighty ‘Gurkhas’!

Nepali Gurkhas have been at their best in safeguarding various world governments and their high-level officials including diplomats, special missions and various global-level conferences and meetings, that the nations paid high regard to.

Over the centuries, they have played vital role globally during world wars, cases of insurgency, among many other horrifying situations pertaining to national security.

The Rise of Gurkhas

Undoubtable loyalty, ferocity in fight and attitude in courage are some best words that can describe Nepali Gurkhas.  Over the centuries, they have literally marched from local to global level breaking the barriers. Diligent services by Gurkhas to various nations holds a sound historical background that dates back to 1814, the year that speaks of their heroic act!

That was the year when the British declared a war against the Gurkhas of Nepal leading to the Anglo-Nepalese war. The British East India company was expanding its wings beyond India and its neighbors then. That’s where the aggressive expansion of Gurkhas within Nepal worried the British.

By then, Gurkhas were already on success path laid by their annexing act across territories in the early 18th and 19th centuries and were on their way to finally form the Kingdom of Nepal.

Finally, with the help of thousands of Indian soldiers, British devised a strategy to divide Gurkhas and then attack them. In a devastating battle that witnessed ground-breaking revolt, the Gurkhas of Nepal rose to fame in 1814 for their straightforward answer to the British that eventually resulted the British losing out to the Gurkhas.

Following this, the British proposed an offer requesting Gurkhas to fight for them, which the Gurkhas had to accept under the uncompromised peace treaty in 1816.  After that, it’s known history that Gurkhas fought for the British in the two world wars, and eventually became key aspect of British Army.

Following Indian independence in 1947, the original ten Gurkha regiments were divided among the British Army and the new Indian Army. However, many of those Gurkhas who served both earlier finally chose their native Indian Army.

Today, Gurkhas serve across various nations such as their home country Nepal, Singapore, Brunei, US, Iraq and Afghanistan, among others. And, it would be really surprising to know that Gurkhas have been serving the British Crown since almost 200 years!

Since then, the Brigade has been at its best in addressing global-level conflicts and peacekeeping operations, among other global-level security operations.

Though their focus was Far East prior to 1997, their base got shifted to the UK following Hong Kong’s annexation.

Some of the key units operating as the Brigade include:

Hill-men from Nepal and those hailing from the families of Gurung, Thapa, Pun or Magar in western Nepal and Rai or Limbus in the eastern part of the country hold high regard as suitable for Gurkha units. Even today, majority of the Gurkhas hail from the aforementioned family groups.

Gurkha ranks are majorly dominated by the aforementioned ethnic families or groups belonging to hilly regions of Nepal.

Nearly 28,000 youths take up the Gurkha selection procedure for just over 200 places, every year.

As of 2017, Gurkhas have their presence across various army departments such as Indian Army (nearly 42,000), British Army (around 3,600), Singapore Gurkha Contingent (around 2,000) and Brunei Gurkha Reserve Unit (nearly 500), among others.

What the World Says About Gurkhas?
Here are some of the world’s famous statements on Gurkhas:

If I had Gurkhas, no armies in the world will defeat me– Adolf Hitler

Bravest of the brave, most generous of the generous, never had a country more faithful friends than you – Sir Ralph Turner MC, 3rd Queen Alexandra’s Own Gurkha Rifles, 1931.

They are tough, they are brave, they are durable, they are amenable to discipline – Tony Gould, Historian

They [the Gurkhas] are among the best Singapore can offer…They remain very much a substantial and frontline force, and the demands of this kind of event are precisely the sort of special operation that the Gurkhas are trained to handle. –  Tim Huxley, Expert, Singapore Armed Forces

Over the centuries, there are many other global personalities who always admired the Tough Gurkhas of Nepal!

Here are some interesting facts about Gurkhas that might surprise you:

Gurkhas in News
Gurkhas have been in news many times for their unique act. Let’s look at some global news Gurkhas were featured in,  over the period:

List not exhaustive! There are many success stories that speak of the bravery and loyalty of Gurkhas.

A famous saying about Gurkhas reads, “If a man says he is not afraid of dying, he is either lying or is a Gurkha.”