A Big Salute to All the Mothers – ‘Happy Mother’s Day’!

The commemoration of the American Mother’s Day started with Anna Jarvis in 1908 and was declared an official holiday in the U.S by 1914.
Nepali Mahila
Special Stories 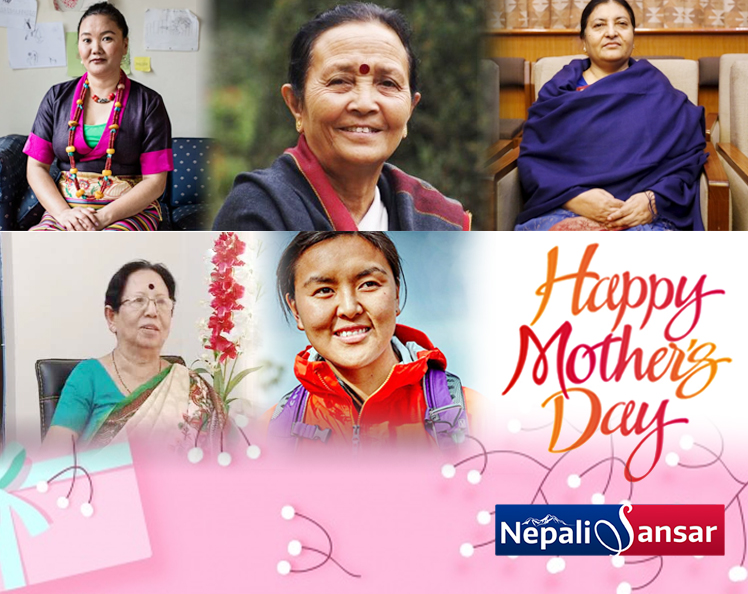 It’s 5 AM, you’re still sleeping in bed but she.. she’s already all over the place getting things done. A single loose end and she knows her family will have to face the consequences. She’s no less than a manager who ensures that his team and their workflows function undisrupted. Yes, our mothers are the ‘show runners’ of our lives. The never-ending show of our everyday lives.

Today 13th May 2018 people world over are celebrating Mother’s Day, the day that has everyone honoring their mothers who share a major part of our lives.

The commemoration of the American Mother’s Day started with Anna Jarvis in 1908 and was declared an official holiday in the U.S by 1914.

After the death of her mother, Ann decided to dedicate a day that would honor the sacrifices of a mother in the process of raising her children. With the financial aid and support of John Wanamaker, a Philadelphia department store owner she organized the first Mother’s Day celebration in 1908 at a Methodist church in Grafton, West Virginia.

With her constant and tireless efforts in establishing this special day, the celebration was made official in 1914 after President Woodrow Wilson signed a declaration. After which the second Sunday of May is celebrated as Mother’s Day.

The United Kingdom in Europe has a different tale to tell. A major tradition at one point in UK and other parts of Europe, this day was celebrated on the 4th Sunday of Lent. It was a day that saw the faithful return to their “Mother Church” considered as the main church.

After a point in time, the ‘Mothering Sunday transitioned into a more secure holiday. This special day had children gift their mothers, flowers and other things as a token of love and gratitude.

The relevance of this day can be traced back to the ancient Greek and Roman cultures. The people held festivals in honor of Mother Goddesses, Rhea and Cybele.

While we cannot compare or measure a mother’s contribution to her family, we can always celebrate her achievements.
Nepal has some inspirational mothers who have not only successfully fulfilled their motherly responsibilities but have set an example to their children by being successful at pursuing their passions. 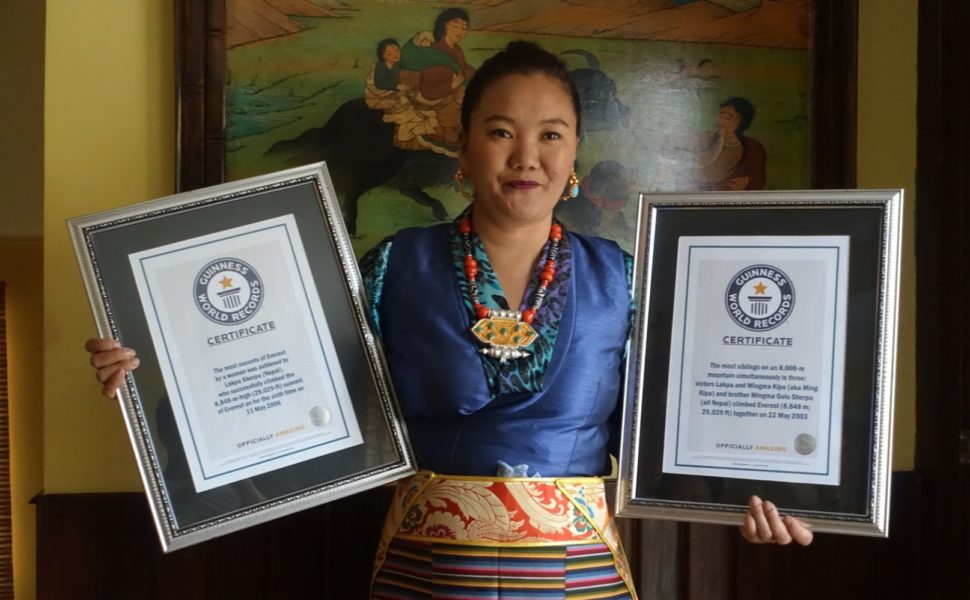 Juggling between the duties of being a mother to two children and working as a dishwasher at Whole Foods, Connecticut, Lhakpa Sherpa’s extraordinary story is a tale worth telling.

The 44-year old is a native of Nepal and holds a world record for climbing the summits of Everest ever done by a woman. Recognized by the Guinness book of world records and famous among mountaineering groups, Lhakpa Sherpa has climbed Mount Everest 8 times and plans to climb it again for the 9th time.

She single-handedly raises her children Sunny (16) and Shiny (11). She gets up at 6 AM to leave them to school by walk. Then walks for 2 miles to her job where she washes dishes and takes out garbage.

Being a part of the Sherpa ethnic community, Lhakpa never got to fulfill her dreams of going to school or becoming a doctor or an airplane pilot. But she wants her children to get the best education and live a life of comfort in the United States. 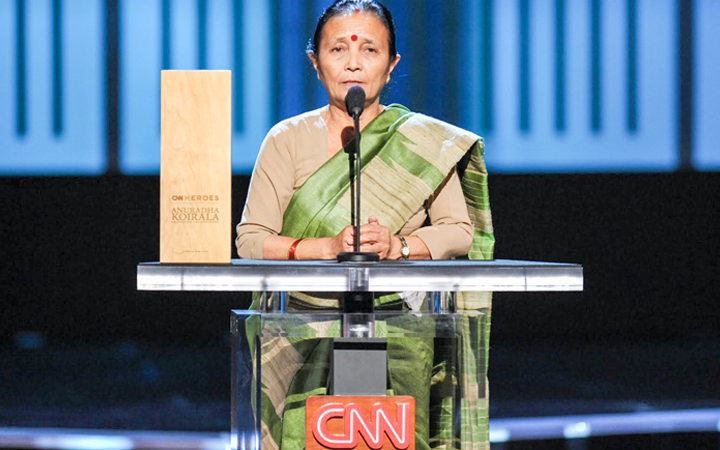 Founder and director of Maiti Nepal, a non-profit organization, Anuradha Koirala is one of the most renowned Nepali women. The name reckons with a motherly person who helps victims of sex trafficking.

Earlier a teacher by profession, Koirala faced the brunt of an abusive husband and left home with her son, Manish Koirala.

During her visits to the Pashupatinath temple for peace of mind, the sight of numerous women with begging bowls moved her. With compassion in her heart she went up to them and asked them if they’d want to work. Once they were ready, she gave each of the women Rs. 1,000/- and asked them to start a Naglo Paslo (Small Street Shop). She then took their children to her own home and that’s how Maiti Nepal was formed.

Maiti means ‘Mother’s home’ and right enough, Anuradha is a mother to all those women and girls who are rescued by Maiti Nepal from sex trafficking. Together with her group of activists, she has rescued more than 12,000 women and girls

Koirala initiatives were rewarded with the Courage of Conscience Award and CNN Hero of the Year Award. 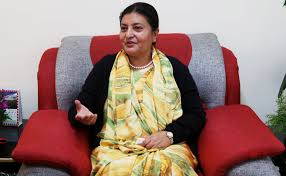 Married to Late. Madan Bhandari, a popular Nepalese communist leader, Bidhya Devi Bhandari is a recognized political figure in Nepal. Currently, the second President of Nepal and Commander-in-Chief of the Nepalese Army, communist politician, Bidhya is the first woman to hold office.

Some of her Achievements:
With more than 30 years of experience in politics, she has served as Vice-Chairperson of the Communist Party of Nepal (Unified Marxist–Leninist), Chair of the All Nepal Women Association, Minister of Defence, 2009-2011 of the government of Nepal and Minister for Environment and Population in 1990s. She has led the All Nepal Women Association for the last 20 years and is currently working towards organizing the forthcoming Girl summit which is working on abolishing child marriage in Nepal by 2030.

With many titles and achievements to her credit, Bhandari was placed 52 in Forbes list of The World’s 100 Most Powerful Women’ in 2016.

Her political vigor has made her an inspiration not only to her daughters, Usha Kiran Bhandari and Nisha Kusum Bhandari but to many aspiring women and mothers in Nepal and worldwide.

A prominent writer and face of Nepali women writers in Nepal, Maya Thakuri is a woman of strength and bravery. Despite a haunting childhood and the constant struggles of life, Maya grew up to become the beautiful poetess and writer we know today.

Her journey of writing began with the publishing of her first shot story ‘Bahulahi’ in the Asha magazine in 1963-64. When she arrived in Kathmandu in 1970s, the literary scene had begun to see a high with the works of Parijat. Maya was already a famous name in fiction writing when she joined the Tribhuvan University.

Despite, her demise the name Pasang Lhamu Sherpa will stay etched in the history of Nepal forever. A buoyant mountaineer, Pasang was born into a mountaineering family and was enthusiastic about climbing right from her teens.

Before climbing Everest, she had successfully climbed Mont Blanc, Cho Oyu, Mount Yalapic, Pisang Himal and many others.

The morning of April 22, 1993 saw Pasang create history after she reached the top of the 8,848-peak (Mount Everest) with 5 others.

Although she did not survive to tell the tale of her achievement, she has been bestowed with many recognitions. She was the first Nepali woman to be honored with the “Nepal Tara (Star)” by His Majesty, the King. She was also honored by the National Youth Foundation with the Youth Excellence Award (!993-1994). A life-size statue of Pasang was placed at Bouddha, Chuchepathi in her remembrance. These and many other recognitions were conferred on the brave heart of Nepal. She is an example to all the young mothers of Nepal.

An Ode to a Mother So Beautiful 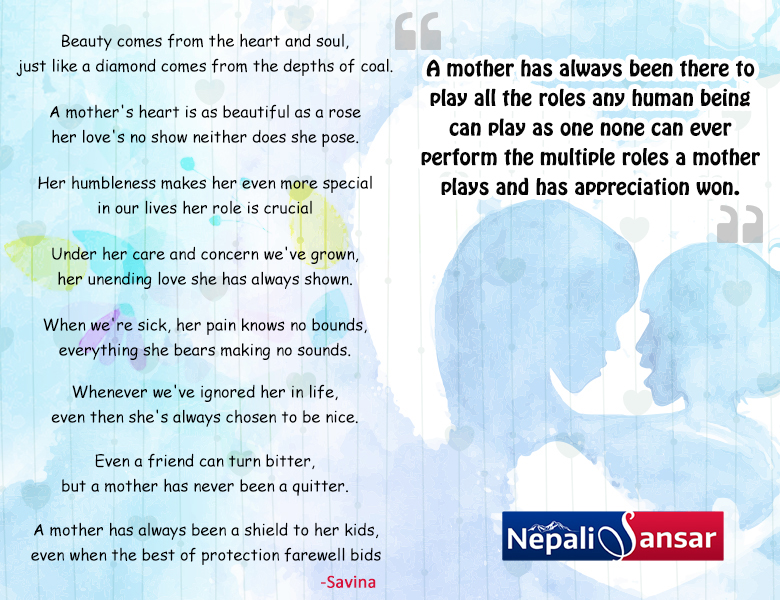 Happy Mother’s Day!
Other than these great women, there are many mothers who go on to create a legacy of their own. Nepali Sansar salutes all the Mothers of Nepal and wishes them a hearty ‘Happy Mother’s Day!’.