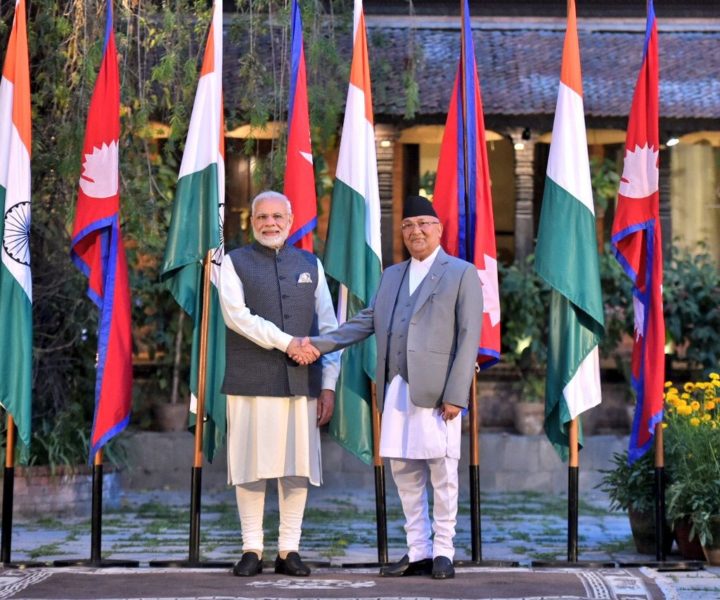 Indian Prime Minister Narendra Modi began his 2-day visit on Friday with the aim to strengthen the bilateral cooperation between India and Nepal. Despite being Modi’s 3rd visit to Nepal, this visit is the first ever ‘High Level’ visit from India since Nepal’s new government formation.

The visit came after Nepali Prime Minister, KP Sharma Oli’s visit to India. It focuses on the initiative taken by India towards building friendly relationships with Nepal. Addressing the media earlier, Modi said, “My visit closely follows the State Visit of Prime Minister Oli to India last month. These high-level and regular interactions reflect my government’s commitment to the ‘Neighborhood First’ policy, in consonance with the motto of ‘Sabka Saath, Sabka Vikas’.”

Narendra Modi was received by the Nepal Defence Minister Ishwor Pokharel and Chief Minister of Province-2, Lalbabu Raut among other important persons. Following this, Modi was welcomed with local music and a group of dignitaries in Janakpur. 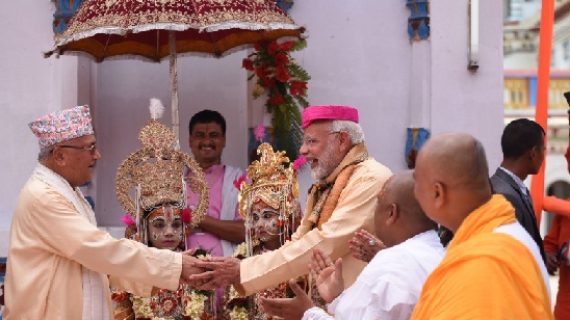 Modi then visited the Janaki temple in Janakpur where he offered prayers in accordance with Khodasopachar rituals. The 30-minute puja was administered by 12 priests and was attended by Nepali PM, KP Oli as well. The statue of Goddess Sita is decorated with clothes and jewels as part of the ritual. The Janaki temple is dedicated to the Goddess Sita and is reflects the Hindu Koiri Nepali architecture.

Tradition has it that the special ritual is performed only on behalf of the special guests visiting the temple.

Thousands of people from India and Nepal gathered to see the Indian PM in Janakpur. Once outside the temple, Modi described his experience saying, this is a historic moment. “It is my privilege to come here and offer prayers to Mata Janaki”. Thanking KP Oli, Narendra Modi addressed him as ‘Mere Bhai Sahib’. 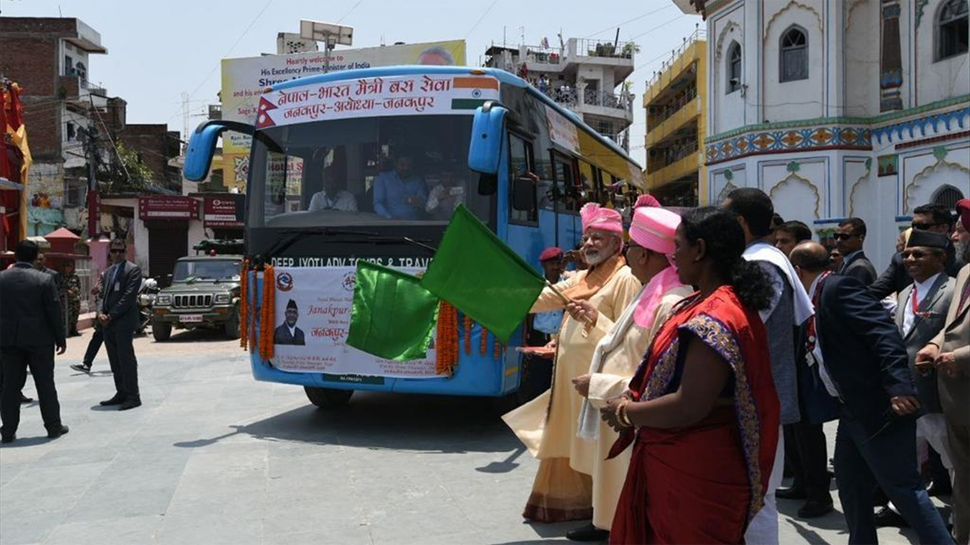 The Indian PM was welcomed by a civic reception at the Janakpur Sub-Metropolitan City in Barhabigha ground. Talking about the bus route between Janakpur and Ayodhya, he said, “Tourism is developing at a fast pace across the world. This Ramayan Circuit has immense potential.”

During his talk, Modi announced that Janakpur and its surrounding areas would receive a grant of 1 billion for its development.

Following his public addressing, Prime Ministers Narendra Modi and KP Oli flagged off the Ayodhya-Janakpur bus service. Now a part of the Ramayan Circuit, the bus route will connect the birthplaces of Goddess Sita and Lord Ram.

After a spiritual experience and the inauguration of the bus-route at Janakpur in the region of Mithila, Modi was flown to Kathmandu, the capital city of Nepal.

In Kathmandu, Modi was met by Foreign Minister of Nepal, Pradeep Gyawali followed by a ceremonial reception that included a Guard of Honor. Later in the day he met President of Nepal, Bidhya Devi Bhandari and Vice President, Nanda Bahadur Pun.

After the meetings, there were bilateral talks between KP Oli and Narendra Modi. The Nepali Prime Minister then hosted a dinner in honor of the Indian PM. 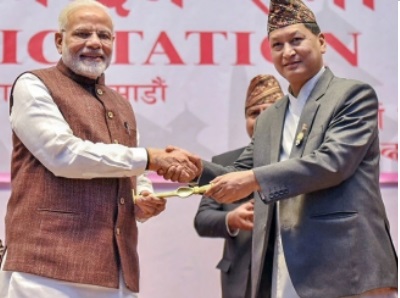 Currently, the Bhaktapur Cancer Hospital in Kathmandu has only one Bhabhatron Radioactive Cobalt-60 telepathy machine. “The hospital was in need of radiotherapy machine for treatment of cancer. There is only one Cobalt-60 radiotherapy machine in the hospital and additional gift would help provide timely treatment to cancer patients,” said Ishwor Shrestha, Director at Bhaktapur Cancer Hospital.

Visits to Muktinath and Pashupatinath 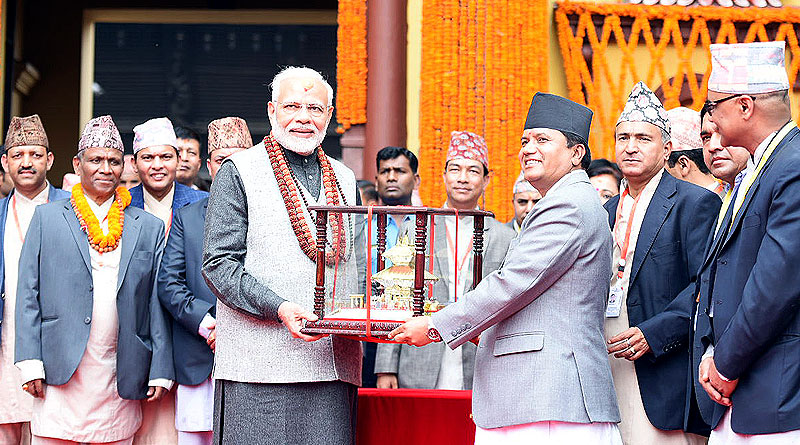 On the morning of 12th May, Modi visited the Muktinath Temple in the Mustang district of Nepal. The Indian PM offered prayers at the golden statue of Lord Vishnu known as Mukti Narayan at the temple.

Seated at the foot of Thorong La mountain pass, Muktinath is located at a height of 3,710 M. The temple is sacred to both Hindus and Buddhists.

The Muktinath-Chumig Gyatsa houses all the elements, earth, air, holy water and natural fire. Hindus believe that the natural fire and holy waters represents Brahma. The central belief of the Muktinath area is the veneration of Lord Vishnu in the form of Ammonites (shilas) called Salagrama-Shilas.

Modi was then welcomed with a civic reception amidst the beating of drums. He actively participated in the festivities and was seen beating a traditional Nepali dhol.

Later, in the day he visited the famous Pashupatinath temple in Kathmandu. The temple is sacred to Hindus and is located on the banks of Bagmati river. Regarded as one of the oldest temples, the Pashupatinath is the temple of Shiva. Modi has visited this temple in the past but what makes this visit special is that the Indian PM becomes the first leader in the world to visit this holy shrine.

After his visit, he was invited by the President of Nepali Congress and former Prime Minister Sher Bahadur Deuba and other members of the Nepali Congress.

As part of his itinerary, Modi met Communist Party of Nepal (MC) Chairman, Pushpa Kamal Dahal ‘Prachanda’. He was the former Prime Minister of Nepal. The meeting had Modi and Prachanda discuss ways of strengthening bilateral relations.

He also met Mahanta Thakur, President of the Rastriya Janata Party – Nepal, and other leaders of the party. Modi congratulated the party for their electoral performance and exchanged views on deepening the nations’ bilateral relations.

The Indian Prime Minister was honored in a civic felicitation program in the Rashtriya Sabha Griha, Kathmandu. After the ceremony, Modi was presented with a key of the city and other souvenirs by Bidya Sundar Shaka, Mayor of Kathmandu. 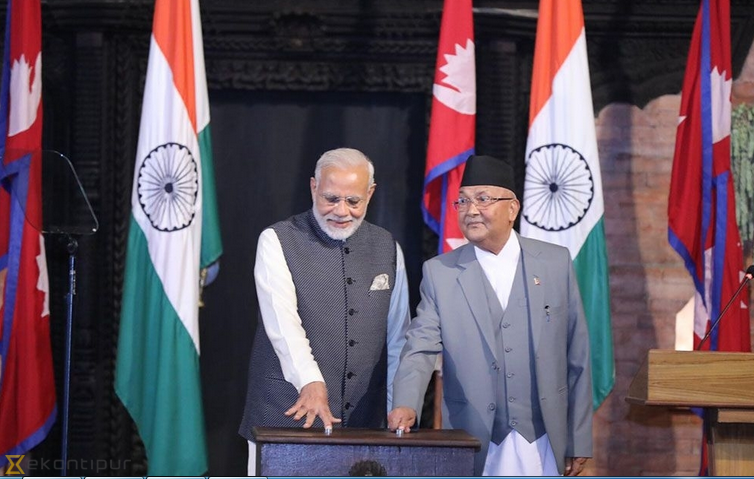 The project was initiated after permission was granted in accordance with the decision of the 30th Meeting of IBN’s Board of Directors.

The largest capacity Hydroelectricity project, Arun III will be constructed over the next 5 years.

The Satluj Jala Vodyut Nigam Power Development Company was recently granted a license by the IBN, to generate power from the Arun III Hydropower Project. This power development company is a subsidiary of the Indian government-run Satluj Jal Vidyut Nigam Ltd.

The Promise of a Golden Tomorrow 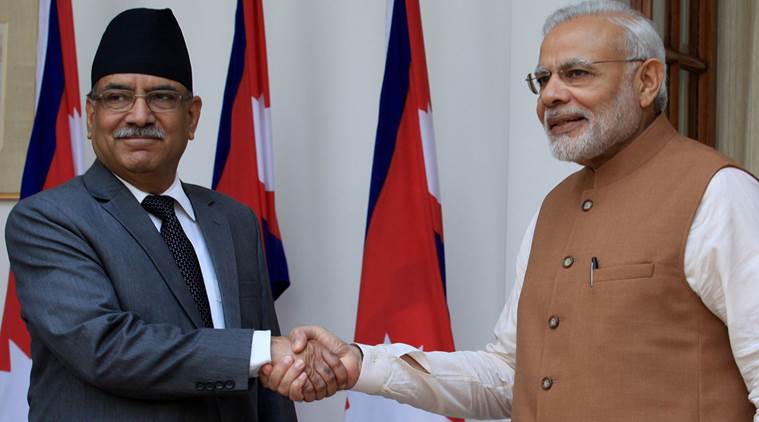 He said that Modi had helped take Nepal-India ties to a higher level. Speaking further, he said Indian PM Modi had decided to set into action, the past pacts that were long pending. The two prime ministers have agreed to set a time frame to implement the past pacts.

Oli and Modi also discussed ways to address the trade issue between the two nations, further enabling the easy import of Nepali products like ginger and cardamom.

Oli told the parliament that India was open to the idea of mapping four new air routes. India is willing to extend its support by sending technicians to study Nepal’s proposal for the new air routes and will make a firm decision for the same by September.