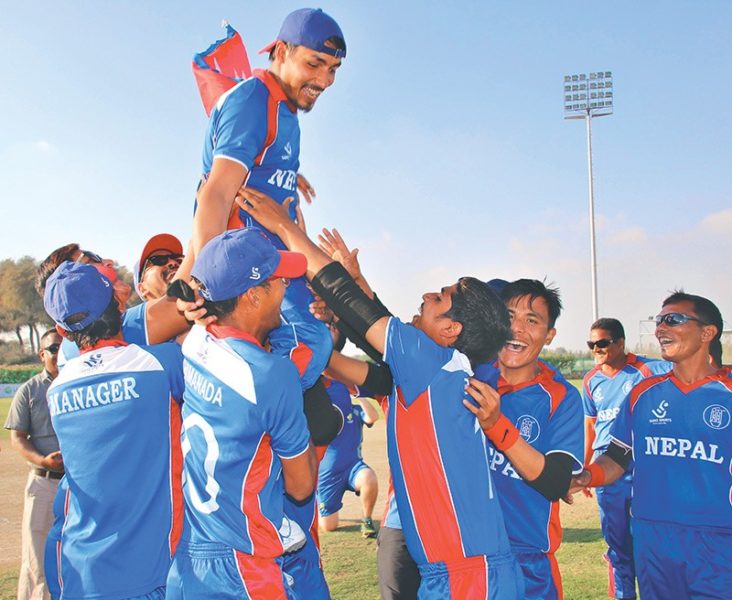 Nepal registered an outstanding victory against Australia in a recent match held as part of the Blind Cricket World Cup 2018.

Though Australia made a dashing start, its batting order had to fall for the amazing bowling performance by Nepali bowlers Durga Dutta Paudel, Bikram Bahadur Rana and Bharat Thapa.

While Durga Dutta claimed three wickets, Bikram and Thapa claimed one wicket each.

Then Nepal’s batting innings began with an amazing performance by the Opener Ramesh Baniya who went on to score 47 runs.

Further, Badela stood as the man-of-the-match for his 125 runs in 76 balls with 14 boundaries, while his partner Chaulagain scored 35 runs and remained a not-out.

Finally, the team finished the set target in just 22 overs with an outstanding 137-run batting partnership by Padam Bahadur Badela and Badri Chaulagain.

The latest win against Australia comes an encouragement to the Nepali team as it marks the country’s first-ever participation in the 40-over Blind Cricket World Cup Tournament after losing three consecutive matches against Bangladesh, Pakistan and India.

In this fifth blind cricket tournament, currently being held in Pakistan, six teams including the host country Pakistan, India, Sri Lanka, Bangladesh, Australia and Nepal cleared the qualifying round.

However, with Nepal losing out three consecutive matches, Pakistan, India, Sri Lanka and Bangladesh made it to the semi-finals.

The two players have been key in taking ahead the Nepali blind cricket team since the team began 11 years ago.

After serving for a long duration, now the two players announced retirement saying they would wish to make a way for young players.

Overall, Rana has played two Twenty20 World Cups for Blind and Duwal has played one.

The ongoing 40-over World Cup tournament is Nepal’s first such tournament in the blind cricket history.