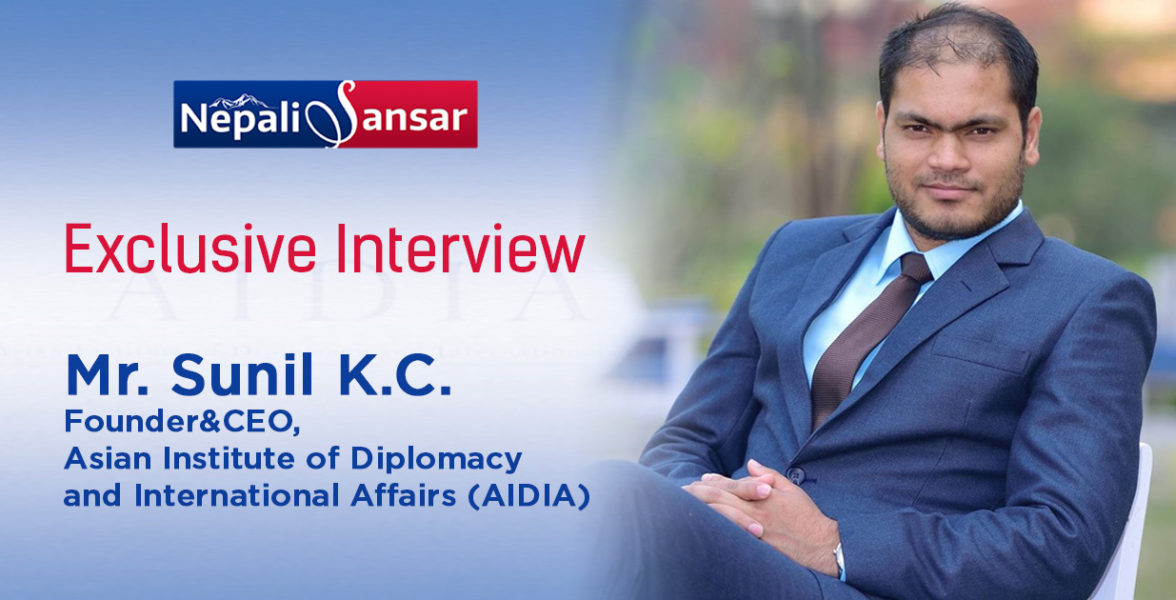 Nepal is one country that has been in news since the recent past for its fast-paced development.

From witnessing the formation of new governance after a long political struggle to making strategic moves in the form of bilateral ties with foreign nations, Nepal is undoubtedly in the path of an all-round development in all aspects.

In a milestone step as part of our coverage on this fast-developing nation, Nepali Sansar Bureau (NSB) got a chance to get in touch with Mr. Sunil K.C, Founder and CEO of AIDIA.

From being an entrepreneur with sound expertise in the fields of mass communication, journalism and geopolitics, Mr. Sunil has been continuously watching different phases of Nepal’s development, internally and externally.

In an exclusive interview with NSB, the AIDIA Chief shared his valuable thoughts about the country’s all-round development both externally and internally, alongside highlighting key focus areas that Nepal needs to recognize its full potential and AIDIA’s support in the process.

Here are some of the excerpts from the interview:

1. NSB: After a long-standing social struggle, Nepal finally seems to be seriously engaged in the path of development. How do you feel about this change?

Sunil: The continuity of transition in Nepal’s political and social spectrum had hugely impeded the overall economic growth and development of the country. Poverty, unemployment, underdevelopment, foreign migration, corruption, trade deficit, sluggish and in many ways exclusive economic growth, among others were and are the fundamental features of Nepal’s economic outlook due to our primary focus on the settlement of political agendas.

Promulgation of constitution and completion of the three-tier elections including federal, provincial and local levels (clear majority of one party on federal parliament and six among the seven provincial governments) provided the major support for political stability, which is also the key for economic development of any nation.

2. NSB: What is your take on the new government’s policies in enhancing the country’s portfolio, internally and externally?

Sunil: The incumbent government led by the Nepal Communist Party has got the clear majority after the then BP Koirala led Nepali Congress government in the democratic history of Nepal.  So, this is the greatest opportunity for the party to work and deliver concrete result for the development and prosperity of the nation by fixing the shortcomings of the country’s economic outlook mentioned before.

It may not be prudent to measure about success and failure of current government now, as it has just been six months from the formation of the Federal Cabinet. Though, little delivery in comparison with the high-sounding election manifesto demands for more serious engagement by the government. Ending public transport cartels can be considered as one of the major achievements of the government. Investigation of gold smuggling, issue and demands related to health sector reforms among others need to be taken into logical end.

Externally, the government approach of practicing balance foreign policy with its immediate neighbors is pragmatic. Broadly, it is also essential to translate all the agreements signed with India and China in reality for mutually-inclusive benefits.

3. NSB: Diplomatic relations with various new countries is one key aspect that is giving Nepal major global attention in the recent times. What impact do you think these moves can have on Nepal’s position in the global platform, at present and the future?

4. NSB: What major shift do you see in Nepal’s diplomatic moves in strengthening or exchanging ties with the neighboring Asian giants?

Sunil: The very shift in a Nepal’s foreign policy discourses that Nepal should balance the relations and act as a bridge between two Asian giants India and China, which can be considered as the discourse paving the right track. But, simply, it looks something like easier said than done. The global power transformation towards Asia is forming the New World Order and the complexities are hyphening due to reordering of the power structure in international system. Unpredictability is increasing with the blurred positioning and repositioning of the great powers.

Largely, the positive sign of domestic political stability of Nepal is the right opportunity to cache the benefit from the vibrant economy of China and India. Basically, the respective railways connectivity agreement, energy cooperation and other investment agreements in big infrastructure signed with our neighboring countries should be implemented effectively looking at financial viabilities of the projects.

5. NSB: We see a growing entrepreneurship and start-up culture in the country. How do you see the progress of it and support from the related stakeholders for the country’s budding participants in their respective fields?

Sunil: Indeed, it is true that the engagement in entrepreneurship is increasing; many foreign returns from migrant workers and students from different countries are also setting and creating the success story of entrepreneurship.

Promoting entrepreneurship in the context of our low level of industrial development and service sector, and also the high level of foreign migration should be one of the principal priorities of Nepal. Nepal Government has been also implementing Micro-Enterprise Development Program (MEDEP) in collaboration of multi-lateral donor agency, and also announced recently start-up loan for youth against collateral academic certificates. Government need to ensure the effectiveness of these initiatives and should also need to facilitate by conducting the necessary policy reform to ease the entrepreneurial activities.

6. NSB: What is your take on growing FDI in the country, which almost grew three-fold in the recently-ended FY 2017-18?

Sunil: Indeed. The FDI commitment in Nepal is rapidly growing, but there is also the huge gap between FDI commitment and real FDI inflow in the country. Foreign Direct Investment (FDI) is crucial for consistent optimum trajectory of economic growth, even more for the country like us, which has limited national capital accumulation and investment capacity. Moreover, prioritizing the sectorial need of FDI, guaranteeing the high indicators grading of doing business and also narrowing down the commitment vs. real inflow of FDI should be the priority of Nepal Government.

7. NSB: Nepal has been actively hosting various national and international conferences since the recent past. How is this adding to the country’s overall development and its portfolio as a key player in shaping Asia’s future?

Sunil: True. In Nepal, government, private sector, autonomous government and non-governmental institutions, independently and jointly, are hosting the summit/conference/symposium with subject related to public policy and foreign relations. Definitely, the rational discourse in emerging domestic and foreign matters helps to promote the development of nation with necessary policy reform and departure.

Similarly, our geographical location amidst India, China and other Asia powers can be the perfect place for the discourse in shaping Asia’s future.

8. NSB: As an organization setting a platform for policy dialogue, what do you think about involving young generation in public policy-making across government bodies?

Sunil: Engaging and empowering the youth is must for the prosperous future of any country. To share our own experiences, AIDIA is led by the core team of youth and has been continuously ensuring the participation of youth on its national and international events.

As we also see the involvement of youth in many countries in the process of policy making in the government level on different issues related to public policy including education, health, employment, environment, among others. It is important for Nepal to ensure and increase the involvement of youth in the policy-making process of local, provincial and federal level.

9. NSB: As a global-level platform for policy makers, academicians and industry leaders, what do you feel can make a better Nepal?

Sunil: This is the fundamental question which has been continuously under discussion from parliament to public domain and the question demands the very long elaborative response. But, let me just try and forward brief key points from my personal observations.

With two-third majority, the incumbent government needs to be very proactively engaged to manage its internal and external issues, because it is the primary and highest responsible mandated authority to make the country better. Fulfilling the basic need of its citizen’s education, health, food, water; preserving and promoting the national unity; stimulating domestic economic opportunities for employment, poverty reduction and decelerating the trend of foreign migration; infrastructure development and ensuring inclusive economic growth, effectively maintaining internal security, law and order and defending its sovereignty and territorial integrity among others are the primary responsibility of the government.

Similarly, civil society, media and citizens have to actively play the effective role in supporting the right policy departure of the government and being critical in wrong-doings without being unbiased. The prosperity and better future of Nepal also depends on how effectively we manage our relation with our immediate neighbors.

10. NSB: How do you feel about Nepal’s Governmental support in driving the discussions/debates to reality?

11. NSB: What role AIDIA has in shaping Nepal’s progress with regard to bilateral ties with world nations, policy debates that enhance governance and pitching for right policies that add to the governmental efforts towards overall development of Nepal?

In first place, AIDIA has been continuously ensuring the participation of policy makers and scholars in every platform. AIDIA believes this is one of the best ways to contribute in the foreign policy shaping. Secondly, AIDIA is sharing its video coverage of every event and the proceeding with concern stakeholders as well as with general public.

AIDIA had also already organized roundtable meetings with African countries like Ethiopia, Zambia, Zimbabwe, and Kenya, and Central Asia Countries like Tajikistan, Kazakhstan and exploring more countries within the region about the trade, investment, tourism opportunities between Nepal and the respective countries in the region.

12. NSB: International bodies such as UN are pushing the countries towards meeting the internationally-set agendas. How successful has Nepal been in meeting those or making efforts towards achieving such goals?

Sunil: Nepal, so far, has achieved the modicum success in meeting the international agendas set by UN. Nepal had committed to the Millennium Development Goals adopted by the United Nations in 2002 to reduce poverty and advance other social development targets by 2015.

Nepal also made noteworthy progress in other social development targets like promoting gender equality, reducing child mortality rate, improving maternal health, combating HIV/AIDS, malaria and other diseases, environmental sustainability and global partnership for development. However, Nepal is at the bottom of countries with middle human development status in South Asia.

Nepal is committed to fully achieve these unfinished agendas in the planning and implementation of the follow-on Sustainable Development Goals (SDGs) (2016-2030).

Nepal aims to upgrade from LCD status to a developing country by 2022 and to a middle income by 2030. Nepal has been slow but gradually progressing and the new stability is politics may also play a role to achieve the set goals.

13. NSB: How do you see Nepal’s scope of overall socio-economic development in the near future and further, may be towards 2020?

Sunil: As mentioned earlier, now Nepal has stability in politics which plays a significant role in socio-economic development. In the last decades, Nepal’s economy and development activities were hugely affected by political instability. The stable government itself gives a favorable environment for economic development and harmony. In addition, Nepal intends to become developing country by 2022. If handled well, the federal government with institutional decentralization can be the crucial for Nepal to boost its economy through inclusive economic activities. But, we are also witnessing the discrepancies in exercising the power amidst three-tier government. It should not be the impediments for exploiting the abundance of resource that Nepal has in its disposal and is the key for overall socio-economic development of the country.