According to WHO statistics, there are around 1.5 million Hepatitis A,B and C infected people in Nepal
Health
Special Stories
World

Among many battles that Nepal fights, the struggle against some diseases are long-standing and hard to deal with. But with the country’s relentless and successful efforts, it was able to completely get rid of its long-standing concern, Trachoma!

However, there are many others, one such is Hepatitis, a battle that most of the world countries are fighting against and the Himalayan Nation is no exception.

On the occasion of World Hepatitis Day 2018, let us take a look at the world hepatitis scenario and more importantly Nepal’s progress with hepatitis awareness and eradication.

To begin with, let us first understand what Hepatitis is all about.

What is Hepatitis?
Pan American Health Organization (PAHO) defines Hepatitis as an in­flammation of the liver commonly caused by hepatitis virus. Hepatitis can be classified into 5 types, Hepatitis A, B, C, D and E.

While addressing a press conference organized by HF, President of HF Anil Karki says that they will be submitting a report on the status of Hepatitis in Nepal to the UN to inform them about the scenario in Nepal. This report will help the UN start some initiatives to begin awareness in the Himalayan country.

Statistics in Nepal
Although Nepal is doing its bit in keeping up with the pace of the world nations in fighting hepatitis, it still lags behind in terms of strategizing diagnostics & treatment and lacks the required infrastructure & logistics says a 2016 report.

2010 – The Year of the First Hepatitis Day
The WHO officially declared World Hepatitis Day in 2010 after the World Health Assembly (WHA) passed the Resolution 63.18, which establishes the day as one of the seven ‘officially-endorsed WHO health’ days and one of the four ‘WHO disease-specific’ days. 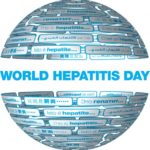 Following the findings of a global survey in 2018 which lists out the barriers to Hepatitis B and C diagnosis globally, the WHA has come up with a list of obstacles that it identifies as major ones: 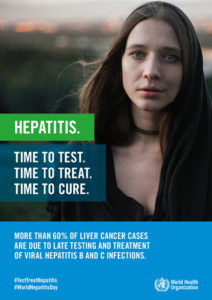 Recognizing the need for #hepatitisawareness in the South-East Asia region, Dr. Poonam Khetrapal Singh WHO South-East Asia Regional Director says, “This lack of awareness and treatment lead to progressive liver damage and can cause life-threatening conditions such as fibrosis and liver cancer, resulting in an estimated 4,10,000 deaths in the region every year.”

Hope that the initiatives and efforts of the WHO, PAHO, WHA and HF bring about the desired goal of eradicating #Hepatitis by 2030.