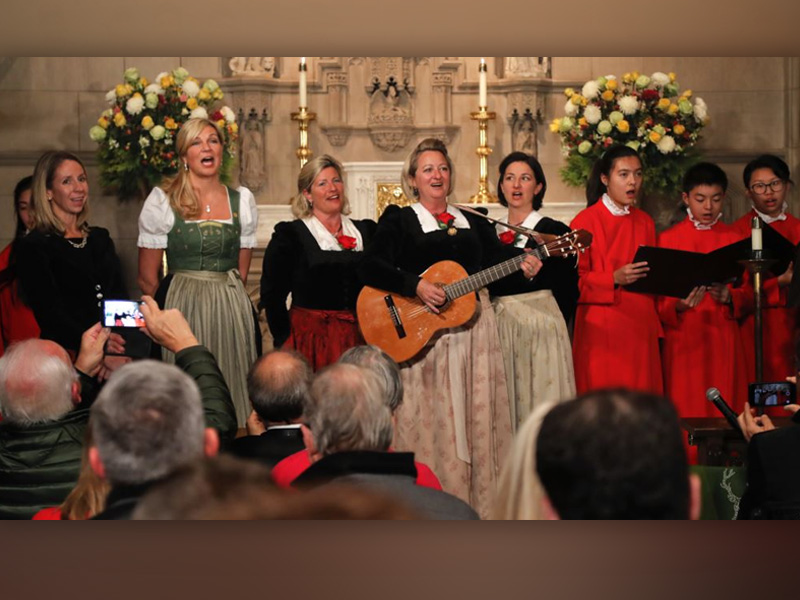 Christmas is coming soon; can you feel it already?

We’re less than a month away from Christmas and the celebrations have already begun.

People across the world are welcoming the holiday season with different celebrations and New York City had a special celebration to begin with.

November 27, 2018 marked 200 years since our favorite carol ‘Silent Night’ was introduced to us.

For the first time ever, the Austrian carol was sung in US at a concert in a New York City church along with the song’s English translation shared by a priest.

Onlookers gathered and watched as singers filled the silence with the sweet melody at the darkened yard in front of the memorial.

The Kroll singers started the performance with the original German verses of the carol, which was followed by the Trinity singers French, Spanish and English.

When the performance ended outdoors, the singers went inside to perform another set of songs which ended with another rendition of Silent Night!

The song has a special place in everyone’s heart is because of its simple melody and straightforward message said Elizabeth Frontull, Kroll group member.

“You sing it from the bottom of your heart; that’s the reason why the song is so popular,” she said.

About Silent Night’s Origin
The concert’s organizers believe that the song was first sung at the Trinity Church Location in 1839 by the Rainer family singers, a traveling singing group from Austria.

Silent Night first emerged as a musical piece in December 1818, written by Joseph Mohr, a priest. It was accompanied by the beautiful symphony of Franz Xaver Guber in Oberndorf, Austria.

Austrian Tourism organization conducted a number of events including concerts and exhibitions to mark its Anniversary.

Silent Night is one of the world’s most recorded numbers and was declared as part of Austria’s heritage.

“It touches the hearts of people deeply,” she said. “It’s a very simple song, it has an eternal message of peace. It is also something that the whole world needs to hear,” said Sigrid Pichler, spokeswoman for New York City’s Austrian Tourist Office.