Pokhara literally means the valley of lakes and has eight lakes of which Phewa, Begnas and Rupa are the ones worth visiting.
News
Tourism

Pokhara is one of the major tourist destinations in Nepal. Located 120 miles west of Kathmandu, Pokhara is surrounded by some of the world’s highest mountains including Dhaulagiri, Annapurna I and Manaslu.

The Valley of Lakes

Pokhara literally means the valley of lakes and has eight lakes of which Phewa, Begnas and Rupa are the ones worth visiting. Phewa has an island in the middle of the lake on which stands a pagoda-style temple dedicated to Barahi Bhagwati or the water goddess. The lake is also famous for reflecting the image of the Annapurna range in the crystal-clear water.

Begnas lake is surrounded by a forest rich in flora and fauna with over 150 species of birds. Rupa and Begnas lakes are often called twin lakes and are separated by the Pachabhaiya ridge. The lakes are relatively secluded and offer a wonderful experience of nature for travelers.

Other attractions in the region for tourists include the Seti river, Davis Falls and a number of caves including the Mahendra cave, the Bat’s cave and the Gupteswar Mahadev cave. The nearby village of Sarangkot provides a spectacular view of the sunrise over the mountains.

The Shanti Stupa or World Peace Pagoda located atop the Ananda hill is another vantage point for viewing the Himalayas and Pokhara city.

Tourists can indulge in many activities on a trip to Pokhara. Paragliding, skydiving, trekking, kayaking, canyoneering, white water rafting, biking and camping are some of the numerous pastimes popular among the visitors to Pokhara. 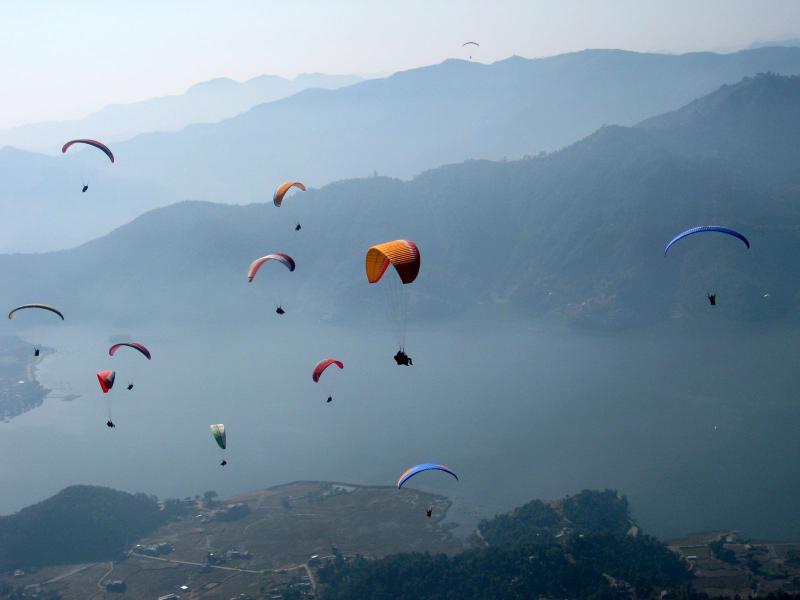 The Lakeside in Pokhara is a very popular vacation spot renowned for its nightlife with modern restaurants, pubs and discos.

The period from September to November is considered the best time to visit Pokhara. The months of April and May also attract a number of tourists with warm and pleasant weather.

Undoubtedly Pokhara is one of its kind tourist attraction and must find a place in every traveler’s itinerary.