A 29-km distance from Birgunj to Pathlaiya is the busiest highway of Nepal!
Special Stories
Tourism 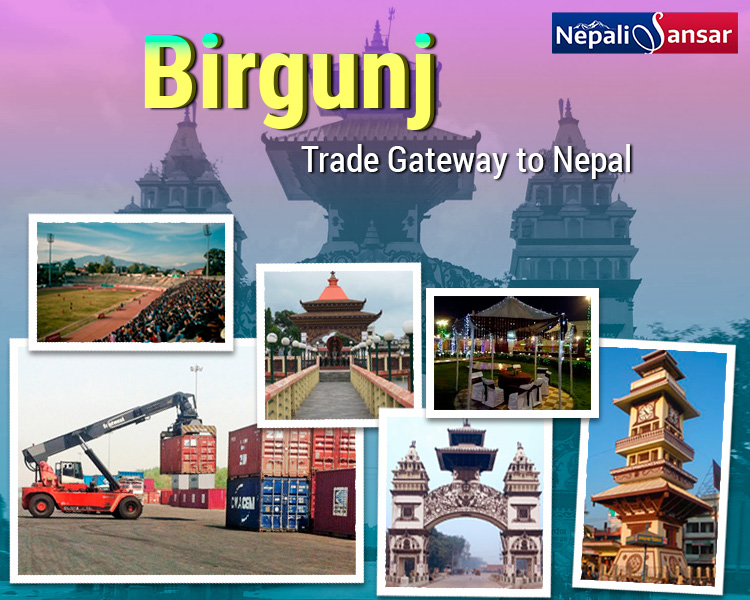 In the south-central part of the country in the Terai region lies the multi-ethnic and multilingual city of Nepal, Birgunj!

As the second largest city in Nepal’s Terai region and largest in the Narayana Valley, Birgunj is home to more than 300,000 population comprising of various ethnic groups majorly the ‘Tharus’ and is the second-most populated metropolis of the country.

The region houses some of the significant languages such as Bhojpuri, the most-spoken language of the region, among various others such as Nepali, Maithili, Newari, Marwari and Hindi, mostly of Indo-Nepal origin.

Birgunj has a large number of people from Indian origin majorly from Bihar and Rajasthan, who moved as a result of migration in the time range of 50-200 years back.

History
Initially called as Gahawa, Birgunj derived its name from the name of the 3rd Rana Prime Minister Bir Shamsher Jang Bahadur Rana, who founded the city in 1897.

Over the years, the town transformed to become a conglomerate of several villages in and around the Gahawa Mai Temple, the epicentre of the town.

Birgunj saw various transitions over the years! The region was disturbed for more than 10 years and also saw a two-year-long shutdown as a result of unrest caused by Nepal Parliament’s announcement of ‘Nepal as a secular state’ in 2006.

Finally, Birgunj emerged as a sub-metropolitan municipality and moved further to finally become a ‘Metropolitan’ in May 22, 2017, along with Biratnagar.

Birgunj is currently the headquarters of Parsa District in the Narayani Development Zone.

A Strategic Location
Birgunj is present at a strategic location at a distance of 84 km south of the capital city Kathmandu and sharing the border with Raxaul in the Indian state of Bihar.

The town is popularly known as the ‘Gateway of Nepal’ for its strategic position as an entry point to Nepal from Indian cities of Patna and Kolkata.

As a key transit point facilitating Indo-Nepal trade, Birgunj has been enjoying the status of being a continuously-developing vibrant industrial city since more than 60 years.

With a large number of industries set on the Birgunj-Pathlaiya industrial corridor, Birgunj produces a wide range of products such as pharmaceuticals, textiles, vegetable ghee, plastic, steel, plastic, cigarettes, aluminum, among others.

A 29-km distance from Birgunj to Pathlaiya is the busiest highway of Nepal!

Birgunj is also a renowned market for trade of different merchandise and has products that majorly cater to both the domestic consumption and export markets.

A special Customs post adds to the uniqueness of the city as a significant economic center of Nepal. Major proportion of Nepal’s trade with India and third world nations happens through this customs post!

It’s no surprise in saying that Birgunj Customs holds a major contribution in terms of revenue earnings to the government’s treasury.

To improve trade operations, a Dry Port has also been established in the town recently to address the concerns in handling the large volume of goods.

Do you know? 56 percent of Birgunj products are exported to the Indian state of Bihar!

Key Landmarks
Besides being an industry-specific, Birgunj also hosts some key landmarks that add to its significance as a tourism destination.

Besides the Narayani stadium, the town also has a cricket ground with high-class outfield and a fantastic pitch. Do you know? Nepal’s first day-night cricket match was held in this ground.

For all these reasons, Birgunj is famous as the cricket hub of Nepal and is home to renowned Nepali cricketers such as Irshad Ahmed hail and Haseem Ansari, among others.

One aspect that speaks the entertainment angle of Birgunj is FM radios. The town has some of the country’s significant FMs including Narayani FM 103.8Mhz, Terai FM, Radio Birgunj, Birgunj Musical FM and Public FM, among others.

Connectivity
Birgunj is the city that closely connects Nepal with India via Kathmandu. Birgunj has a railway station extending up to Raxaul of Bihar, India.

With regard to air connectivity, Birgunj is served by Simara Airport, which is 9 km away on the northern side of the town. The town is also awaiting the country’s second international airport at Nijgadh, just 22 km away from Birgunj.

Birgunj in News
Birgunj has been in news for many landmarks developments. Let’s look at some of them:

List not exhaustive! There are many such interesting news Birgunj was featured in for over the period.

Overall, Birgunj means a lot for Nepal in terms of trade and revenue earnings. Let’s hope the region would make more strides to become more important to the nation in many other key areas of development! All the Best Birgunj!