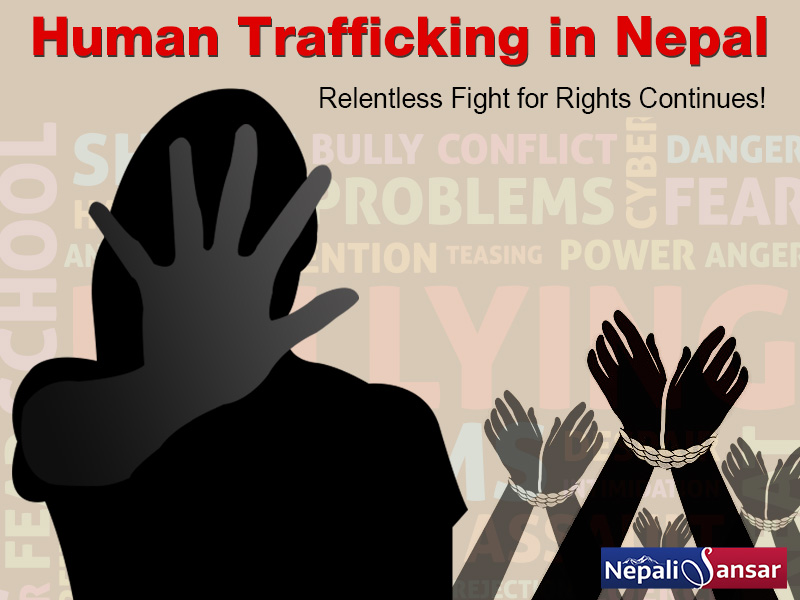 Be it in terms of development, policy-making, governance, among other ways, nations across the world have seen wide range of transformations over the years.

Even then, it’s tough to say we are on path of development, considering the illicit activities such as exploitation of #humanrights & freedom, #SocialInequality and #ChildLabor, among others.

One such demotivating aspect that makes us rethink of development is #HumanTrafficking, the menace that has been deciding the fate of many innocents, globally.

Standing next to drug trafficking and arms dealing, human trafficking remains to be a battle and a growing criminal activity for many nations despite strict policy-level decisions, and Nepal is no exception! In fact, more prone to girl and #womentrafficking in particular.

Relentless efforts by government, social activists and media over the years literally went in vain in tackling #HumanTraffickingInNepal.

“First you have to learn to take them as your own child. Then you will feel the sorrow and then the strength comes out from you to protect them” –  Says Anuradha Koirala

A Glance
Nepal is one of the key source countries globally known for forced labor and sex trafficking involving men, women and children. Human trafficking in Nepal’s case can be observed in three different ways:

1)  Within the Country: Human trafficking within Nepal typically involves #traffickingpeople from rural to urban locations. Especially, the young girls and women trafficked from rural areas are subjected to #sexualexploitation across enjoyment spots such as pubs, hotels, and other places falling under the ambit of tourism centers. While some of these women voluntarily take up the act, many of them were literally forced into the act and end up as slaves after a period, either #bondedlabor or as workers across low-profile jobs in factories etc.

2)  Across the Indo-Nepal Border: Girl and women trafficking across the Indo-Nepal border is one most-heard aspect. Over the years, many girls have reportedly been trafficked to various India’s urban areas and used for sexual exploitation across brothel houses and child labor across unorganized and informal sectors. Surprisingly, records show the presence of more than 1 lakh trafficked #Nepaliwomen across India’s urban locations.

3)  Beyond Borders: Besides the closest borders like India, #NepaliVictims have also reportedly been trafficked to various other destinations such as Bangladesh, Pakistan, Russia, Hong Kong, Malaysia and some Middle East countries. India has reportedly been a transit for trafficking of Nepali women to regions such as Western Asia and Middle East, among others. Nepali victims to non-Indian destinations are most likely subjected to sexual exploitation, in particular to non-brothels.

Here are some shocking facts you should know about human trafficking in Nepal’s case:

List not exhaustive! There are many such facts about human trafficking in Nepal that can touch your emotions.

Governmental Efforts
Nepal Government has taken several initiatives over the years to tackle the menace.

According to UNICEF, Nepal already agrees to various international legal frameworks to protect its women and children from the human trafficking menace, which include:

“Accept What’S Done To Their Children, If You Don’t Mind It Being Done To Yours – Children Trafficking”

The country also has in place a domestic legal framework including:

Besides, Nepal also has many agencies working for it such as:

There are many other measures that the government has been adopting to fight the human trafficking menace.

“Child slavery is a crime against humanity. Humanity itself is at stake here.” – Kailash Satyarthi, Indian Activist

“Life is a gift of our Creator…And it should NEVER be for SALE.”

It is slavery in the modern age. Every year thousands of people, mainly women and children, are exploited by criminals who use them for forced labor or the sex trade. No country is immune. Almost all play a part, either as a source of trafficked people, transit point or destination. – United Nations Secretary-General, Ban Ki-moon

“Slavery was abolished 150 years ago… and yet there are more people in slavery today than any other time in our history.”

“Human trafficking is a crime against humanity. We must unite our efforts to free victims and stop this crime that’s become ever more aggressive, that threatens not just individuals, but the foundational values of society.” – Pope Francis