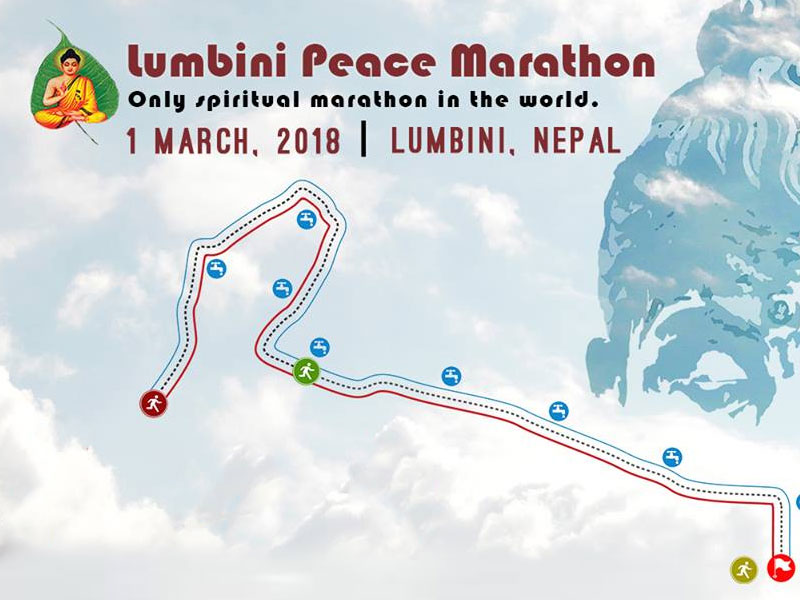 The fourth edition of the Lumbini Peace Marathon, arguably the only spiritual marathon in the world, was held in Lumbini, the birthplace of Gautam Buddha on March 1, 2018.

The marathon attracted participants from several countries including the US, China, India, Germany, South Korea, New Zealand and Sweden, among others.

The event commemorates Buddha’s return to Lumbini on the Falgun Shukla Purnima day after attaining enlightenment at Bodh Gaya.

“The major objective of the marathon is to promote Lumbini-Kapilvastu region at national and international level by connecting spirituality with sports,” according to Bikram Pandey, Chairman of Lumbini Peace Marathon.

The marathon commenced at Kudan, the location where Buddha first met his parents after his enlightenment and included Buddhist heritage sites, such as Niglihawa and Tilaurakot Palace before ending at the Sacred Garden in Lumbini.

Homlal Shrestha of the Tribhuvan Army Club won the marathon for the second consecutive year finishing the 42-km run in slightly under three hours. Hari Prasad Rimal and Khagendra Bhatta, also representing the Army Club, finished in the second and third positions respectively.

“I was an ultra-runner first and I trained for marathon since two years now. I am delighted to win the title here at the birthplace of Lord Buddha,’’ said Shrestha, who was awarded the Lumbini Ashoka Peace Prize worth Rs 100,000.

A three-day cycle rally named the Great Buddhist Trail was organized from Swoyambhu in Kathmandu to Lumbini on the eve of the peace marathon.