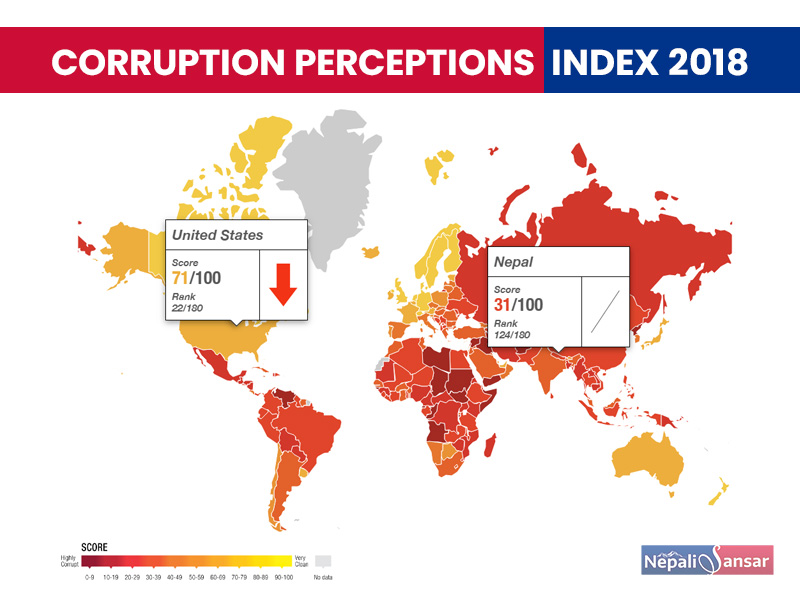 As per the report, the continued failure of most countries to curb corruption is contributing to a spiraling concern for democracy across the world.

The 2018 CPI report was put together after conducting 13 surveys and expert assessments to gauge public sector corruption in 180 countries and territories.

“With many democratic institutions under threat across the globe – often by leaders with authoritarian or populist tendencies – we need to do more to strengthen checks and balances and protect citizens’ rights,” said Patricia Moreira, Transparent Technology Managing Director.

Alarmingly, more than two-thirds of the world countries score less than 50 with an average score of just 43!

It is noteworthy that only 20 countries have improved their CPI since 2012 including Côte, Estonia, D’lvoire. Whereas, 16 countries have significantly deteriorated including Australia, Chile and Malta.

Nepal stands at 124 indicating a long way to go for the country in progressing over anti-corruption, out of the 180 world countries.

Nepal’s score remains almost the same, as there was no progress made to reduce corruption this year.

According to the 2018 CPI report, after the 2017 elections Nepal continues to remain affected by corruption in the public sector, businesses and by government officials.

Nepal’s Aviation scam was one of the biggest instances of corruption in the country, which cost Nepal NPR 4.35 billion

Transparency International has been publishing the report since 1995 and included Nepal in its country list since 2004.

The CPI report puts US at a rank and score of 22 and 71, respectively, which drops it out of the top 20 countries on the CPI for the first time since 2011, losing four points compared to last year. 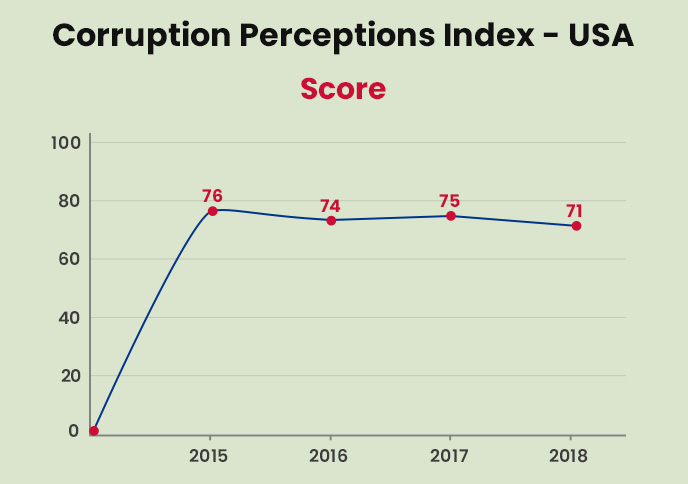 The low score only intensifies the growing concern over threats to the country’s system of checks and balances and erosion of ethical norms at the heights of power.

Transparency International has outlined a few guidelines for world governments to achieve the desired progress against corruption:

Let’s hope that every country makes sincere efforts to curb the growing menace of corruption that eats away at its economy.