Padam does not remember when he began keeping elephants at his hotel. But he says that guests used to pay well for elephant rides in the community forests outside Nepal’s famous Chitwan National Park.

Padam’s two elephants were kept busy from dawn to dusk until March 2020. But as soon as the Covid-19 pandemic restricted travel worldwide, one of Nepal’s most popular tourist sites was largely deserted. Although the Nepali government has now lifted most travel restrictions, Chitwan hoteliers like Padam are still faced with less than 50% occupancy.

Captive Asian elephants are used for tourist rides, wedding processions  and temple ceremonies. The practice is highly controversial, with campaigners attesting the long-lived animals are often taken from the wild and subjected to cruel treatment to make them compliant.

In February, Padam sold one elephant for NPR 6.5 million (approximately USD 56,000) to a trader in India. He hopes this decision will reduce his hotel’s monthly running costs by at least USD 1,000, which had been spent on the elephant’s food and mahout (keeper).

Bishal, another hotelier who leads a cooperative of elephant owners, says the group’s members have sold at least 20 elephants to Indian traders in 2021. They now hold 35 elephants, the lowest number since the cooperative was formed two decades ago.

However, Nepal and India are both signatories to the global Convention on International Trade in Endangered Species of Wild Fauna and Flora (CITES). Asian elephants are listed on Appendix I of the convention, a category for species that are “threatened with extinction which are or may be affected by trade”. Importing live animals listed on Appendix I (or their parts) for “primarily commercial purposes” is not allowed so as not to “endanger further their survival”.

CITES rules state that before Appendix I species can be transported from one country to another, the exporting CITES Scientific Authority must have advised that export will “not be detrimental to the survival of the species”, while the CITES Management Authority must be satisfied that the animals were legally obtained, after which they may issue an export permit.

Meanwhile, the importing country’s Management Authority must issue an import permit, having been satisfied that the animal(s) are “not to be used for primarily commercial purposes”, and following determination from the Scientific Authority that the import will be “for purposes which are not detrimental to the survival of the species” and that the recipient of a live animal is “suitably equipped to house and care for it”.

In order to implement CITES, the Nepali government introduced the Act to Regulate and Control International Trade in Endangered Wild Fauna and Flora in 2017. It states, “No person shall purchase, sell, possess, use, plant, rear, captive-breed, transport or import or export or cause to be done so a threatened or vulnerable wild fauna or flora or a specimen thereof.” As defined in the act, “threatened fauna or flora” are all species included on Appendix I of CITES. 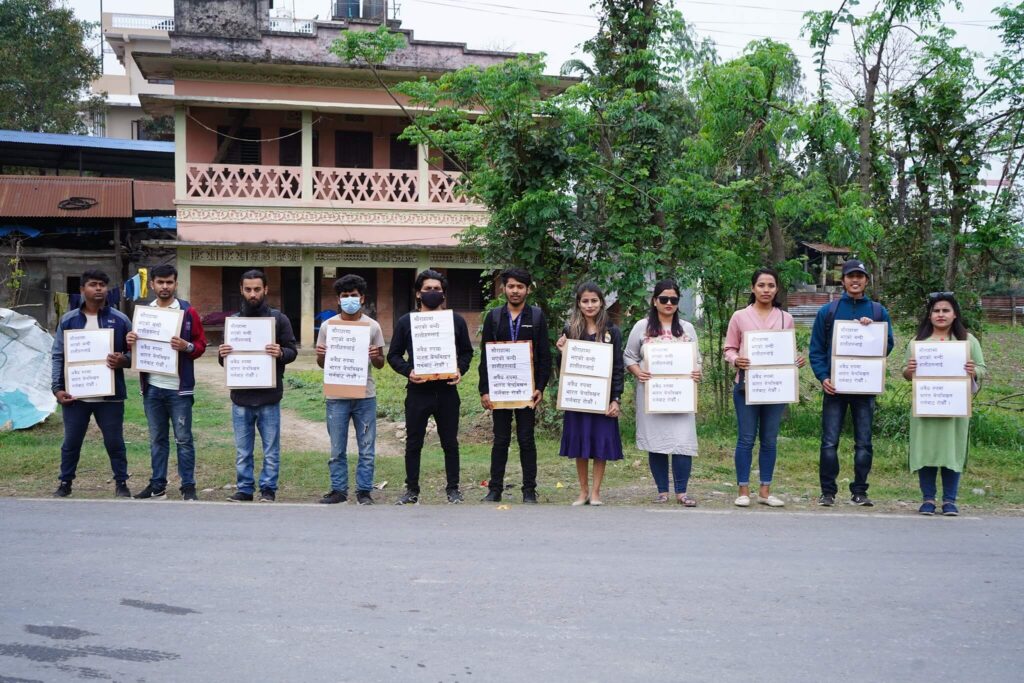 In 2019, the government published a set of regulations on how to implement the act. Section 2 of the regulations notes that any person wishing to trade in such species or their parts should meet various statutory obligations and obtain a permit from the government.

There is no evidence that any of these rules have been followed in the cross-border sale of live elephants. Hari Bhadra Acharya, spokesperson for the Department of National Parks and Wildlife Conservation – the government agency responsible for implementing the act – says no one has sought any approval so far.

The ongoing trade is clearly illegal, and the government has a responsibility to stop it, says senior advocate Prakash Mani Sharma. The department has not done anything because it has not been “formally” informed about the trade, says Hari Bhadra Acharya. Nevertheless, he adds, he has heard about these activities, and “needful action would be taken once the sale is proved”.

Acharya also says Chitwan National Park officials have been “made responsible” to look into the issue, but the park’s information officer Lokendra Adhikari says the park has done nothing about it.

The Third Pole contacted Chitwan’s chief district officer Prem Lal Lamichhane to ask if he had taken any initiative to stop the trade, two days after reports of an elephant being sold to India appeared on social media and one day after the issue was covered in a national media outlet.

“We tried to confirm what’s going on, but we were told that there was nothing unusual,” Lamichhane said. “We couldn’t confirm the news.”

“If you formulate a law but fail to implement it, it is meaningless,” said Sharma. “The state failing to implement it suggests there is a big nexus between the two [the state and the traders]. We are also violating the international law that we are signatory to.”

Lack of records on captive elephants

The 2019 regulations also say any person or business holding an endangered animal captive should register it with the relevant government agency or face confiscation. No one has applied for registration yet, nor has any elephant been confiscated.

The government does not have any official record of the number of captive elephants in Nepal. A CITES review in 2016 put the number at 216, with almost half being under the management of the government and the rest kept by individuals and businesses. Around 80% of privately owned elephants are estimated to be in Sauraha and Amaltari towns outside Chitwan National Park. 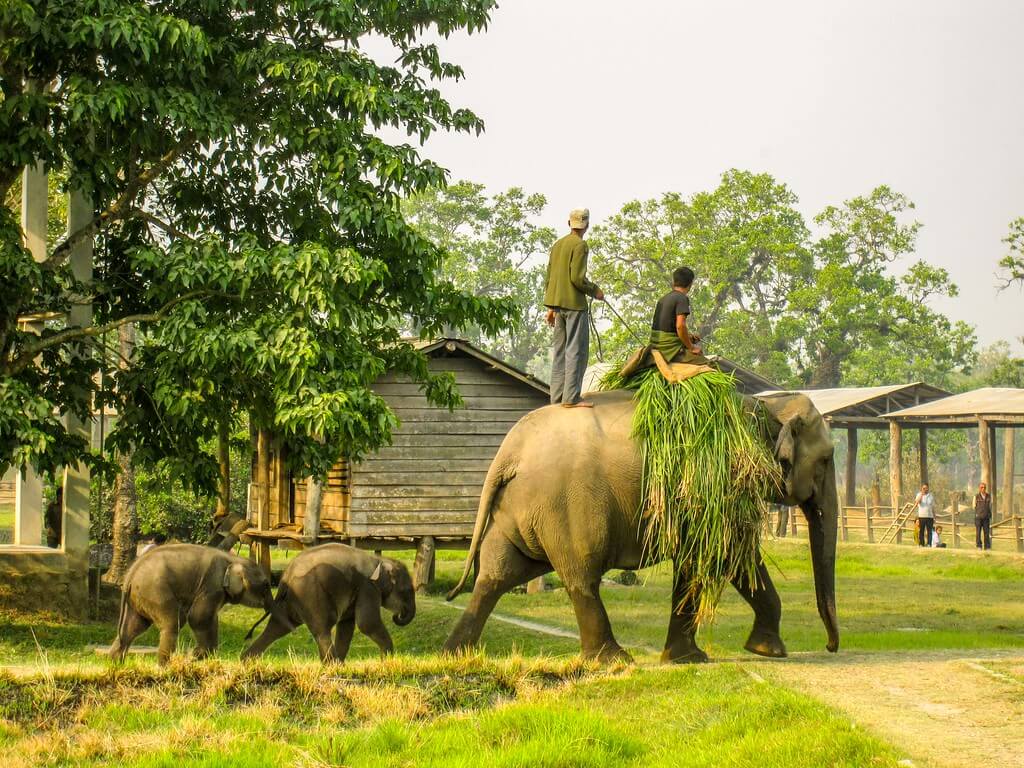 The park authorities may not have taken any action against the elephant sellers, but last year they did start recording the number of captive elephants in the area. As of late 2020, hoteliers in Sauraha, Amaltari and Kasara owned 65 elephants, according to information officer Adhikari. Hotelier Rishi Tiwari estimates the population at around 80 as of last year.

This would mean mean that a quarter of all elephants in the area have been sold to Indian traders in the past three months.

Amir Sadaula, a wildlife veterinarian at the National Trust for Nature Conservation’s Biodiversity Conservation Centre in Chitwan, has been monitoring animal trade for the past five years. He says that to prior to this, he had seen at most three elephants being sold a year, and within Nepal. “People sell them whenever they do not give any profits. But in the past, that was not the case,” he says.

Carol Buckley, founder of the US-based non-profit Elephant Aid International, calls this an exodus. “The pandemic has been going on for a year, but now the market is flooded with buyers. The payment they are offering is inflated and always in cash,” she says.

Activists are also worried about the kind of life the elephants will lead in India. Surajan Shrestha, an animal rights activist in Chitwan, notes that in India, “captive elephants are used in religious functions and even protest rallies”.

Buckley suspects these elephants could be sold over and over again within India or even further afield, maybe again into Nepal. Those selling the elephants now do not know where the animals are being taken. Most Indian traders operate through Nepali middlemen. 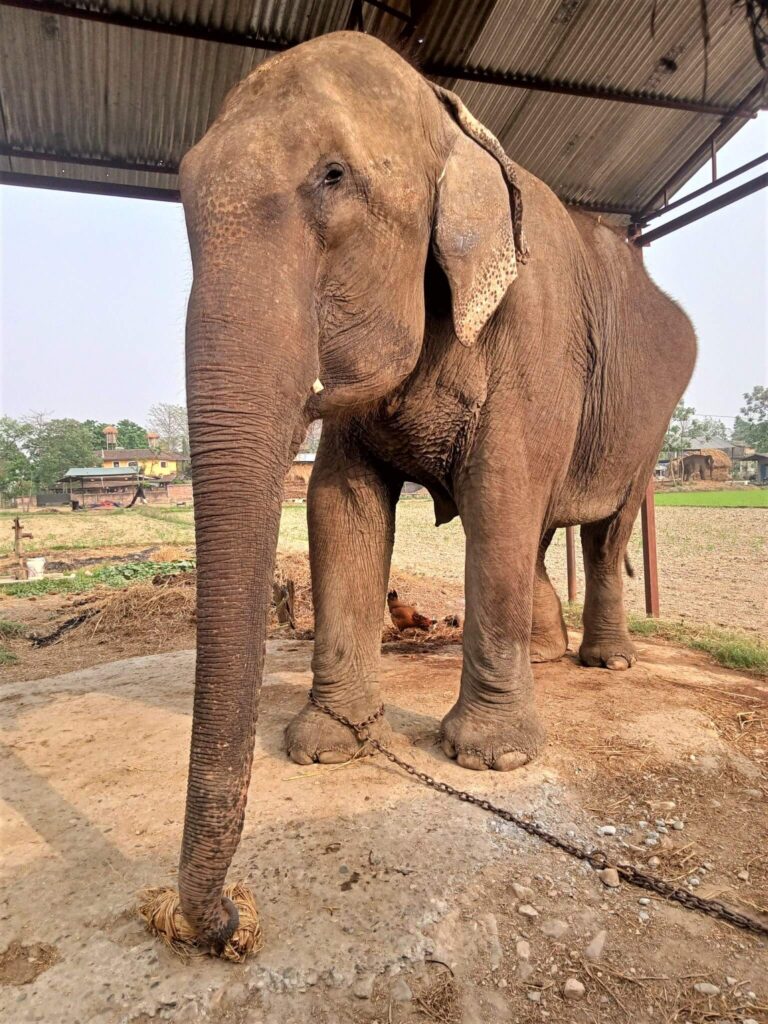 Animal rights NGO Association Moey has said that this elephant, photographed in Sauraha near Nepal’s Chitwan National Park in March 2021, is ready to be sold to India [Image by: Association Moey]

One middleman from Birgunj, a city near the Indian border, told Padam that the elephant he sold would be taken to the home of a local moneylender. “I believe the elephant can now eat better,” Padam says.

“Some might think it’s a good thing,” states Association Moey, an international NGO that once tried to retire the captive elephants of Chitwan into freedom, in a Facebook post. “But, that only shifts the suffering of elephants elsewhere, away from our eyes. They will endure loneliness, abuse and bad living conditions on a daily basis, in temples, weddings, chained and shown as objects of prestige.”

Campaigners oppose the use of elephants in tourist rides. This has created a schism, says Ashok Ram, a wildlife researcher. “Activists opposing the rides make the hoteliers think they cannot earn from the animal any more. Elephants have been used by humans since ancient days.” Hotelier Bishal argues that laws should be revised to meet the interests of people as well as animals.

Activists like Carol Buckley and Surajan Shrestha maintain it is inhumane to hold the animals captive for riding or other activities. Shrestha says the government should establish an elephant sanctuary in Chitwan, acquire all the captive elephants and set them free there. He believes the towns could still benefit from the elephants by attracting tourists, thereby generating revenue and promoting the sanctuary as a model conservation project.

Meanwhile, oscillating between tour operators and animal rights activists, government spokesperson Hari Bhadra Acharya blames the lockdown forced by Covid-19 for the failure to implement the laws of the land.