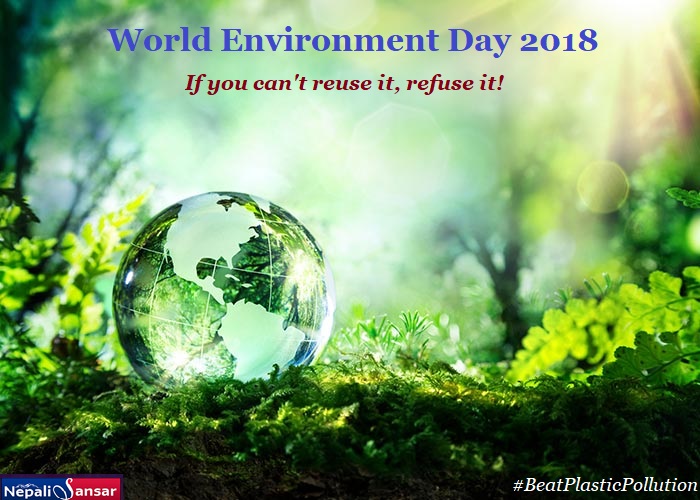 Adding to the global efforts of protecting the environment, Nepal observed the World Environment Day 2018 on June 05, 2018 under the theme “Beat Plastic Pollution.”

Marking the day, all sections of Nepali society including leaders, general public, campaigners, among others pitched on the need for environment protection and related measures as part of the country’s overall progress.

Here are some of the key highlights of #WorldEnvironmentDay2018 celebrations in Nepal:

Marking the celebration of the #WorldEnvironmentDay2018InNepal, the Prime Minister KP Sharma Oli called on all sections of society to contribute to the governmental efforts of controlling environmental pollution.

Oli said Nepal’s measures towards environment conservation have a significant impact on the protection of the global environment.

“Greenery and mountains are our assets. Mountains are not merely piles of mud and rock. Our mountain ranges have been giving water in the form of rainfall and snow. Nepal’s contribution is extraordinary in conservation of world environment,” Oli said in his address to the nation.

Addressing the international community on Nepal’s performance towards environment protection, “In international programs, we are lectured on carbon emissions because of our lifestyle of cooking with firewood, but they have been polluting the oceans with chemicals, which rises above and reaches our mountains where they cause acidic rain and snowfall.”

“Our carbon emission is negligible, but they ask us on how to mitigate. Actually, they have to think how to mitigate,” he added about Nepal’s contribution to global environment protection.

Oli urged the populace to plant at least one sapling that could add to the nation’s income and nutrition to their respective families. “We could export fruits to countries that do not grow fruits that we have. Fruit exports could contribute to the vision of a prosperous and happy Nepal,” he said.

In this regard, he also announced government’s plans towards utilization of forest area; some as human resources and the rest for preservation as natural forests.

“We will not disturb the natural forest to maintain the ecosystem’s balance since many wild animals and creatures depend on it. The government will utilize other forest resources by maintaining a rotation of cutting and planting,” he said.

A Glance at Special Programs 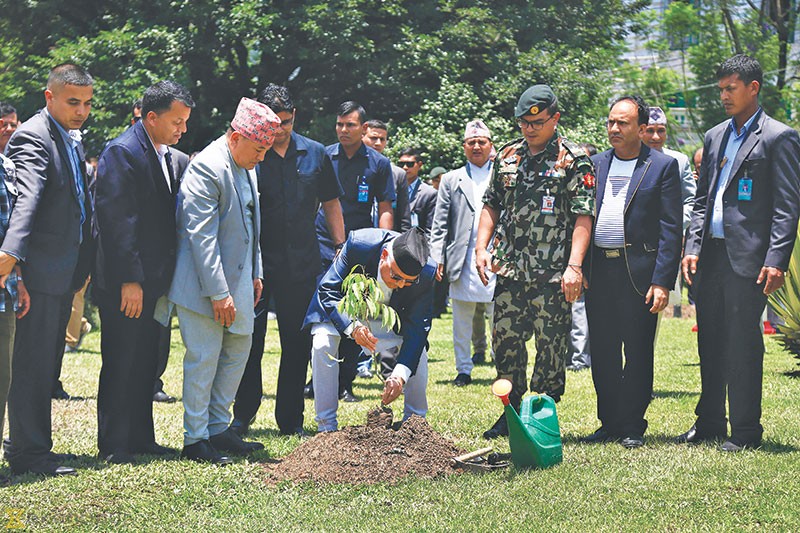 Marking the occasion, various special programs were held across the nation and the government launched ‘One Nepali: One Fruit Plant ‘campaign.

“We need to take pollution equally seriously as we move towards our development goals,” said Oli in his address at a program organised by the Department of Environment at Central Zoo in Jawalakhel.

Continuing the country’s tradition of running series of clean-up campaigns every now and then, the Prime Minister inaugurated a ‘Clean Environment Mega campaign’ marking the special day.

Oli and other ministers participated in a special plantation program at Singh Durbar that was aimed at planting 100,000 fruit-tree saplings.

Thumbs Up for Nepal’s Green Efforts

In another occasion, PM Oli lauded Nepal’s green efforts over the years towards achieving sustainability and environment protection.

Other ministries also spoke about government’s plans for safe environment.

The Minister for Physical Infrastructure and Transport Raghubir Mahaseth urged the concerned department officials to support the government in implementing the policy pertaining to on-road operation of 50 percent electric vehicles within five years.

The Minister for Forest and Environment Shakti Bahadur Basnet also pledged his ministry’s support to all other ministries, province and local governments for the success of ‘Clean Environment Mega Campaign 2075′ for environmental safety. 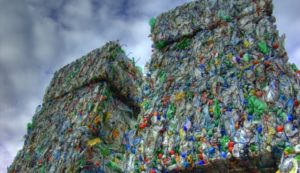 Nepal is one country that has always been conscious about safe environment as evident in a large number of clean-up campaigns we keep hearing from the country.

It is noteworthy that the Government of Nepal has been running a year-long cleaning campaign, which included call for plastic ban on April 15, 2015 across the Kathmandu Valley, urge for environment-friendly policies, promoting green vehicles, among various others.

Despite these efforts, the country is still facing environmental issues, especially with regard to plastic usage as officials’ say.

“Until and unless the government introduces new law to completely ban production of plastic bags below 30 microns, it will continue to be used by consumers,” says Shanker Prasad Poudyal, DoE Spokesperson.

The Global Environmental Performance Index 2018 placed Nepal at 176th position among 180 countries, in terms of global ranking for pollution.

On the occasion of the World Environment Day 2018, the Climate and Development Dialogue, a Kathmandu-based initiative that represents all the Non-Government Organizations of Nepal, urged the government to consider the deteriorating air quality in urban areas of the country.

The group further recommended the government to keep a serious check on the usage of fossil fuels in vehicles, pesticides on crops and vegetables, and the growing industrial pollution.

In a special recommendation, the group urged the government to make Environmental Impact Assessment mandatory for all infrastructure projects in line with the Environment Protection Act.

Besides Nepal, countries across the world have also celebrated the day in coordination with the international bodies such as the United Nations Environment Program (UNEP), among others.