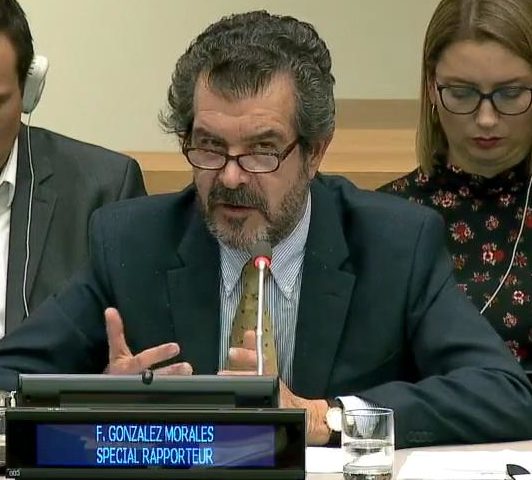 A United Nations Special Rapporteur urged Nepal to take more initiatives towards protecting the rights of Nepali migrant workers across the globe.

Felipe González Morales, who was on an 8-day official visit to Nepal during January 29-February 5, 2018, analyzed the overall scenario of Nepali migrant labor in foreign destinations.

As part of the assessment, Morales held consultations with all the relevant stakeholders including government officials, recruiting agencies, migrants and their families, civil society organizations and trade unions, among others.

As the end-of-the-mission remarks, Morales said, “Important protection gaps continue to exist in law and challenges remain in enforcement, implementation and monitoring.”

An official statement has also been released in this regard on February 05, 2018, wherein, the UN official lauded governmental efforts such as introduction of the ‘Free Visa Free Ticket’ policy in 2015, among others.

The statement also highlighted various key challenges of migrant workers across foreign destinations and has made recommendations with regard to various sectors focused on migrant labor.

Morales made a special emphasis on the migrant recruitment procedures terming that as a very ‘complex process with a large number of actors’.

The official found fault with the recruitment agencies that were found collecting as high as Rs 180,000 in recruiting fees.

Addressing the concern, Morales recommended that the Government of Nepal should initiate sufficient licensed recruiting agencies branches across the districts to avoid the presence of unlicensed subagents and other relevant malpractices.

“Decentralizing services that only take place in Kathmandu can also benefit aspirant migrant workers from other parts of the country,” adds Morales.

The official also proposed the establishment an independent monitoring system to oversee the grievances of different stakeholders.

Pointing out at forced labor, labor trafficking and labor exploitation, Morales urged the government to initiate required probe into the issues.

“Despite existing legislation concerning human trafficking and forced labor, only victims’ complaints related to human trafficking of women and girls for the purpose of sexual exploitation were investigated and tried under the criminal justice system,” he added.

This hurts their right to leave the country and increases their vulnerability to labor exploitation, he noted.

“Such provisions only drive migration further underground and a considerable number of Nepali women use irregular channels through India, often at hands of unscrupulous recruiters. I hence strongly urge Nepali authorities to develop a human rights based, holistic and comprehensive policy, aiming at better protection of women migrant workers in destination countries,” says Morales.

Morales, in his preliminary observations, also made policy-level recommendations including good recruitment practices, reintegration sessions, development of bilateral labor agreements with the host countries in line with international standards, among others.

Besides, he also recommends strengthening of the legal and policy framework, data enhancement on the status of migrant workers, protection and assistance to irregular migrant workers, approval of international conventions, generating domestic jobs, making policies for ensuring skill development of labor and helping returnee workers for their sustainability in the domestic market, among other recommendations.