The match held in Bangabandhu National Stadium of Dhaka on September 08, 2018 saw Nepal’s win over Bangladesh for a 2-0 score.
News
Sports 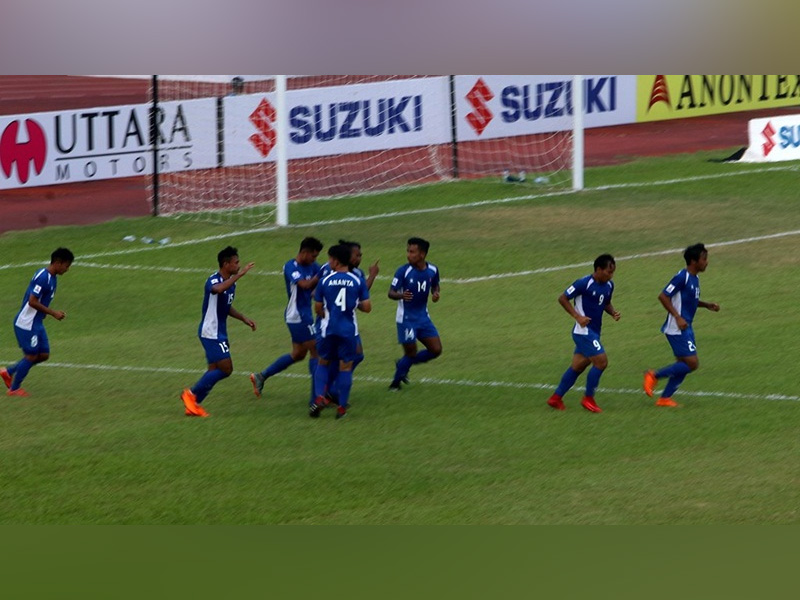 Finally, Nepal smashed it out in the South Asian Football Federation to mark its entry to the
semi-final round.

The match held in Bangabandhu National Stadium of Dhaka on September 08, 2018 saw Nepal’s win over Bangladesh for a 2-0 score.

Though the Bangladeshi team made a good start that continued till 30th minute, it was Nepali mid-fielder Bimal Gharti Magar and Nawayug Shrestha who changed the game later and the Nepal’s position in the tournament all together.

Magar hit the first goal at 33rd minute giving a boost to Nepal, and Shrestha balanced it at the end hitting another at 90th minute, driving the team to victory.

It was a hard game for us. Playing against the home team is always difficult but we stuck to the plan and emerged successfully. The morale of the players was high ever since our win against Bhutan. This win will definitely boost our spirits to go further. – Kiran Shrestha, Assistant Head Coach of Nepali team.

The first goal was a mistake by the goalkeeper and it happens in football. I am extremely proud of the boys. We were caught in the end, but we had to go forward because we had to stay in the competition. Two wins and beating Pakistan was a highlight for us. If the crowd feels disappointed, then I feel sorry for the boys because the effort they have put in doesn’t deserve that. – Jamie Day, Bangladesh Head Coach

Prior to this, Nepal had to beat Bhutan to qualify for this match that earned it chance to enter semi-finals.

Now, Nepal is at the top-2 in the Group after Pakistan and will next play runners-up of Group B on September 12, 2018. Group B already has India, Sri Lanka and Maldives teams.