Nepal has its roots immersed in ages-old traditional practices that passed generations and followed religiously by its people even today.

‘Chhaupadi’ is one such superstitious Nepali tradition that has plagued women for centuries, now.

Chhaupadi is the practice of excluding menstruating women including new-mothers and adolescent girls when they attain puberty. Women and young girls are confined to a cattle-home or makeshift hut (chhaupadi) that lacks ventilation, resources and sanitation.

During the period that lasts anywhere between 5-11 days, women and girls are not allowed to indulge in activity related to their home. This includes touching their household items, touching men, cattle or crops and mainly books as menstruating persons are considered ‘impure’. 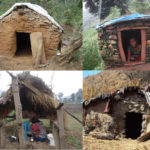 Women have been taught from generations that if they come in contact with any of the above, then the following consequences will follow:

Chhaupadi inhabitants are at risk of contracting various diseases and sicknesses due to unhygienic conditions. Leave alone illness, women are faced with a threat to their lives as well.

Following are the consequences of Chhaupadi:

Cases Reported
Among the innumerable cases reported in Nepal and some ignored, there were some cases that drew serious attention to the ill practice against women. In many instances, women succumbed to asphyxiation or choking on account of lighting a fire for warmth inside the hut, in one incident a young women was exposed to animal attack and in yet another, a woman was found dead in mysterious conditions.

These instances motioned authorities and the government to take action against this cruel practice once and for all.

Women have talked about their experiences and challenges while speaking about Chhaupadi. Here are some gripping tales:

“Are you on your period?” my grandmother regularly asked during my visits to Nepal as a teenager. She wanted to know because I would be “unclean” if I was menstruating. I felt a mix of guilt and rebellion every time I lied. And I would always lie so I could sleep in my own bed, go into the kitchen if I was hungry, or watch TV with the rest of my family. Divulging the truth meant the four days of isolation that I saw my aunts and cousins endure.

“Our goth was far away from our home, so the first time I shed blood, a group of boys tried to rape me. Fortunately, a man came to help me and scared them away.”

“My first time was in winter. It was so cold that I had to light a fire to warm myself, but the smoke was so thick and the window so small that I could hardly breathe. So I had to put it out.”

“If a woman goes inside the family’s home during her period, three things will happen. “A tiger will come; the house will catch on fire; and the head of the house will get sick.”

There have been numerous steps taken by Nepal in abolishing this practice. However, owing to its roots growing deep in tradition, Chhaupadi is still a very much prevalent gender-based and social evil. Let’s take a look at some of the laws introduced to abolish Chhaupadi

In 2005, the Nepal Supreme Court passed a law that criminalized the cruel practice of Chhaupadi.

The law mandates anyone enforcing the custom will be subjected to three months imprisonment along with a fine worth NPR 3,000.

However, the law crumbled and failed to bring about the expected outcomes due to lack of a supporting legislation. Chhaupadi continued to flourish and this time practiced with more fervor in Nepal’s mid and far-western regions with close to 95 percent girls and women still facing the concern.

In 2017 the Nepal Government passed a new law that targeted ending the practice of excluding menstruating women.

The law managed to reinforce the punishment stipulated by to the 2005 Supreme Court ruling. Deaths of three women between 2016-17 brought about the much-need law concerning Chhaupadi.

Nepal’s new civil code and the criminal code came into being on August 17, 2018. The new codes were received among mixed reactions. However, the major provisions included serious actions against Chhaupadi practitioners.

The new laws completely ban Chhaupadi and make practitioners liable for an imprisonment of three months or a fine of NPR 3,000 or both. It has been declared as a criminal act.

Solutions Towards the Abolition Of Chhaupadi in Nepal

Although the act has been criminalized, the problem doesn’t end. It is a known fact that governed by a traditional mindset and with values rooted back in time, Nepalis still continue to follow such practices in places, especially where education is limited and laws are not strictly enforced.

To completely get rid of this practice it is essential that people are educated, made aware of its harmful consequences and understand the role of parents & society.

Nepali Women for a Better Society

Women like Sangita BK, Sajana Bhadel, Nilam Karki Niharika and a number of NGOs are working hard to changes the face of traditional Nepal. Their awareness programs, education at school level and parental guidance are slowly, but steadily making the Nepali community a friendlier and safer girl ecosystem.

It is through their efforts that Nepal has witnessed the change to a certain extent. But the journey is still long, but not impossible.  Let’s pledge to make Nepal a safer place for its women!