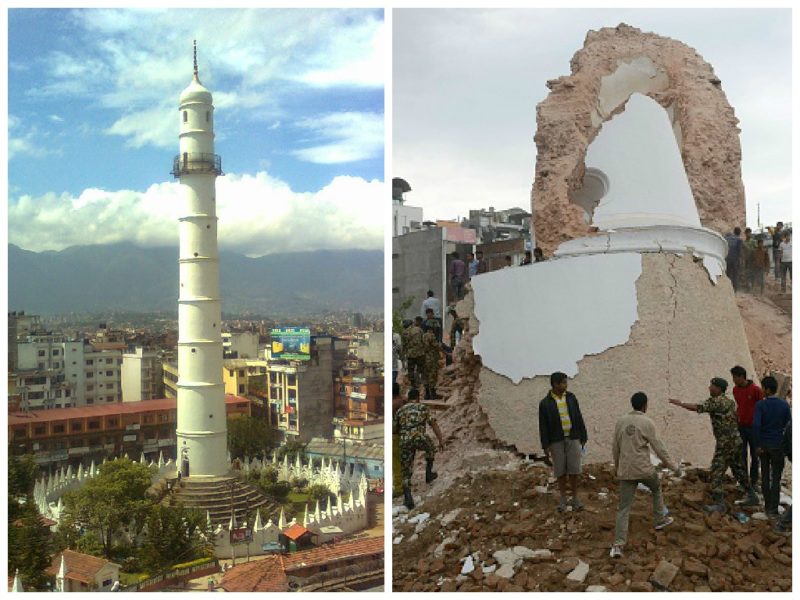 Among the many monuments that fell prey to the 2015 Nepal earthquake, Dharahara, the ‘candle-like’ structure, was also reduced to a bulk of rubble in the downtown of Kathmandu.

But three years after the disaster, the task of restoring this prestigious monument is gearing up!

After a four-month wait, the NRA informed the PMO that it had completed its investigation following Kalika construction’s complaint on bidding anomalies.

Following this, Raman Construction, the lowest bidder amongst suitable others was given the project.

The designated company and its joint-venture partner GIETC has quoted Rs 3.45 billion for Dharahara’s reconstruction!

With other companies’ bid ranging anywhere between Rs 4.39 – 4.49 billion, Raman was in advantageous position with a difference of close to 1 million from its closest competitor, Kalika Construction and its partner companies.

NRA Chief Executive Officer Sushil Gyewali has informed that the NRA will hold an agreement with Raman and its JV, in the following two weeks.

“We will thoroughly study the document submitted by Raman and its JV. We’ve got to fulfill some procedures before reaching to a formal agreement,” said Gyewali.

He said that project will soon be forwarded to PM Oli who is keen on rebuilding the historical building located in the Kathmandu. Oli had expressed his desire to rebuild the project with public support, during his first term as Prime Minister.

Progress in the Making
Initially, the restoration project was to be taken up by Nepal Telecom (NT). However, the said party withdrew from the project in September 2017 following a disagreement over the structure’s design.

The Nepal Cabinet then allowed NRA to take over the project, which published a global tender notice on May 2018 welcoming interested construction companies for Dharahara’s reconstruction.

NRA also welcomed foreign companies’ participation in the reconstruction project but only through a Joint Venture (JV) with Nepal construction firms.

As many as six builders submitted their proposal to Nepal’s National Reconstruction Agency (NGA).

“We were supposed to open the financial and technical bids of interested construction firms today. However, we will open all the bids next week as someone has filed a case at the Office of Prime Minister and Council of Ministers claiming anomalies in the process of announcing global tender by NRA,” NRA Deputy Spokesperson Manohar Ghimire said while assuring that the issue will be sorted out in a matter of few days.

Dharahara Reincarnation!
As per NRA’s design, the new Dharahara will stand at a 22-storey height. The first floor will house a museum in memory of the ‘2015 earthquake’ that shook Nepal with several facts and figures of Dharahara and the 2015 disaster.

The reconstruction project is estimated at around Rs 4 billion and will be funded by the government. Already, funds worth Rs 80 million have been collected from the ‘Mero Dharahara Mai Banauchu’ campaign.

History of the Spectacle 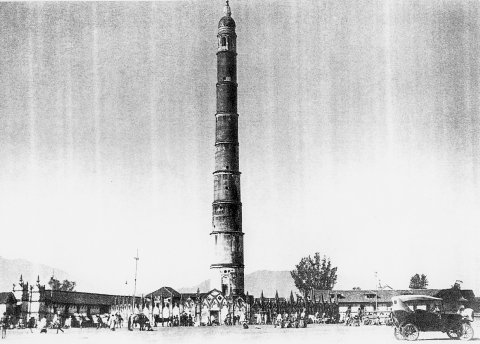 The Dharahara was built by Nepal ‘Mukthiyar’ Bhimsen Thapa in the 19th century which presented a surreal picture of the entire valley.

The original monument stood 11-storeys high but unfortunately when an earthquake rocked Nepal in 1934, the monument was reduced to a mere 9-storey.

Sadly, the structure was completely destroyed in the recent earthquake killing over 100 site-visitors.

The Dharahara was not the only candle-tower in the Kathmandu Valley, its taller twin was destroyed in the 1833 earthquake and was not reconstructed.

Let’s hope NRA’s efforts will restore the grandeur and bring back the glory of the majestic Dharahara Tower!