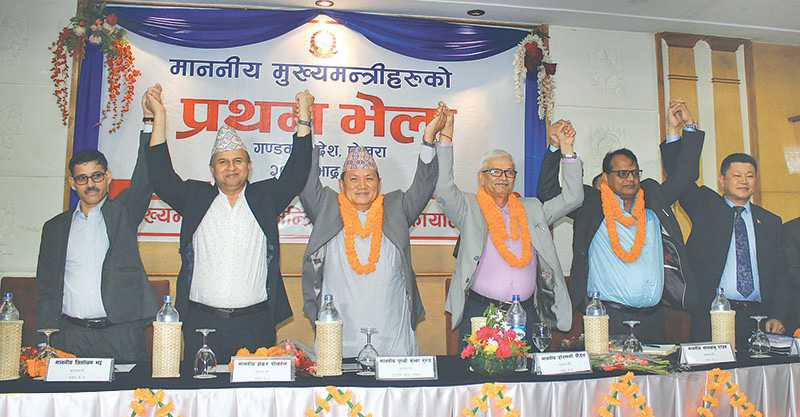 In line with the federal style of government functioning, Chief Ministers of Nepali Provinces met in Pokhara to discuss ways to address gaps in local governance across the country.

The two-day Chief Ministers’ Meeting organized by the Gandaki Province Government was focused on listing out common agendas for the Inter-state Council meeting to be held in Kathmandu on September 09, 2018.

The meeting saw discussions on the current status of governance across local bodies, issues and ways to resolve them.

Speaking on the sidelines of the meeting, Gandaki Province Chief Minister (CM) Prithvi Subba Gurung said that the meeting is in line with the constitutional provision for federal structure that marks the significance of CM’s role in development after Prime Minister.

In the meeting, majority of the CMs said the federal government failed in timely devolution of powers to provincial governments, leading to discrepancies in key areas like defining laws, human resources and required budgets.

Because of this, provincial governments failed to deliver the required support to local bodies, they added.

“This has led to a situation, wherein we’ve not been able to send the message to the people that provincial government is at work despite being six months in power,” said CMs.

They claimed that provinces will not able to deliver the expected unless local administration, civil servants and police are under their jurisdiction.

Raising serious concerns over implementation of budget, policy and programs even six months after the formation of provincial bodies, CMs urged the Center to handover all the physical infrastructure and other properties to the provinces.

They urged for the formation of the ‘National Natural Resources and Financial Commission’ at the earliest possible.

Let’s take a glance at what Chief Ministers of various Provincial Governments said in the Summit:

It’s obvious that questions would be raised against the federal government as the constitution has allocated all the rights to it including that of transition period, civil servants, managing resources, formation of police organization and right to draft laws regarding the list of common rights. Since the provincial governments would be responsible for the failure of federal system, we have taken the initiative to organize the gathering and play constructive role. – Prithvi Subba Gurung, Chief Minister of Gandaki Province

Provinces have brought the budget, but there is no mechanism to implement. Old structures have been removed. The presence of provincial government cannot be felt at all the districts. – Dormani Poudel, Chief Minister of Province 3

“It’s a serious issue. What shall we do if the central government refused to accept when we begin the process after seeking foreign investment?  – Shankar Pokhrel, Chief Minister of Province 5